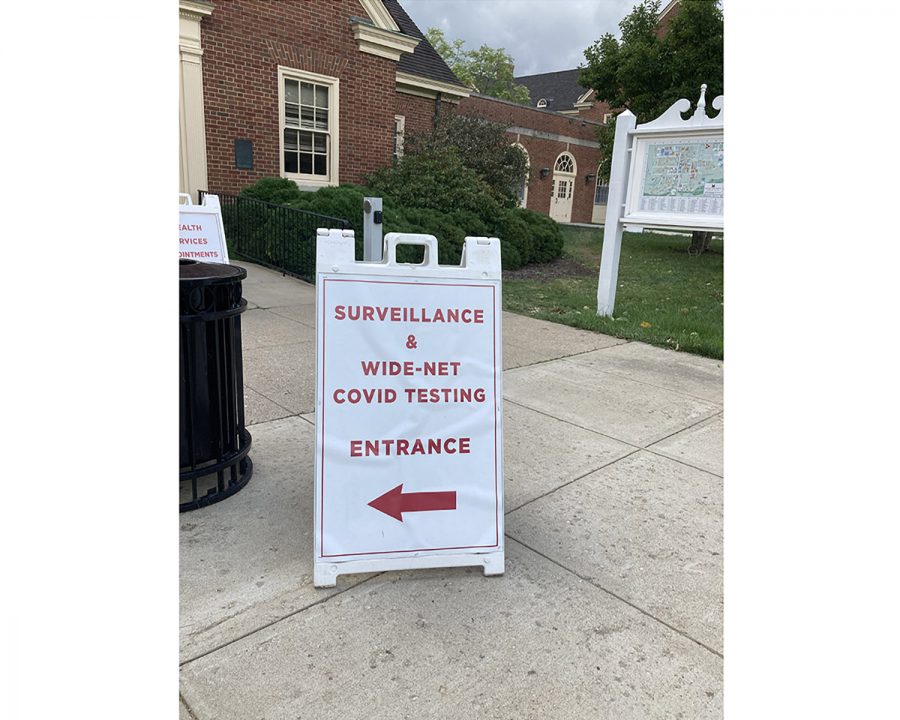 Miami students can get their COVID-19 tests at Harris Hall.

Students’ failure to submit proper documentation about positive COVID-19 tests and a lapse in Miami University’s contract has caused delays in Miami’s ability to isolate possibly contagious individuals, according to university officials.

As it did during the last school year, Miami began isolating students who tested positive for COVID-19 this semester. However, students not signing and submitting  “Release of Information” forms has caused delays, said Dr. Kendall Leser, director of the university’s public health program.

As the Delta variant of COVID-19 continues to spread across the country, students at Miami have been subject to more frequent testing and stronger precautions. Per Miami’s protocols, testing positive for the virus should result in an isolation stay at either Wells Hall or the Miami Inn for several days.

Leser said that incomplete or delayed release forms means the test results will be delayed getting to the university.

Miami’s contract with the Butler County General Health District expired on July 30, but was not renewed until Sept. 20. During the interim, the university partnered with Public Consulting Group (PCG) to do internal contact tracing, causing an overlap in contracts. PCG was in charge of calling and providing students with official isolation orders, Leser said.

Leser and her team of case managers are in charge of contacting students once they are notified of a positive case. However, there are a few steps that some students are forgetting, making it difficult to isolate them for an adequate amount of time.

Until recently, the university could not see the test results of a person who did not fill out the “Release of Information” form. This information would go straight to the state’s system, but would bypass Miami’s internal system. Since the contract with the county health system has been renewed, the Miami team can now quickly get the names of the students who test positive.

Miami students also have a two-step process of reporting oneself to contact tracers. When students test positive, they must first upload their positive test results into the university’s immunization verification and compliance software, Medproctor. Quarantine orders can only be initiated once the documentation is submitted and checked. Students must then fill out the COVID-19 self-report form to notify the case managers that they are an active case.

This semester, Miami has introduced the BinaxNOW home test where students must download the application in order to send verified test results. Without downloading this app, students may experience a setback in getting isolated.

“There’s a whole behind-the-scenes thing that’s happening with contact tracing; there’s a lot of test reporting that needs to be accurate before contact tracing can even take place,” said Leser.

In some special cases, a student may be too sick to be immediately transported to alternate housing. Fully vaccinated sophomore Maxine Gardner tested positive for COVID-19 at the beginning of September, but experienced severe symptoms for the first two days after the test.

“The health center reached out to me the day that I self-reported, and we reached the conclusion that I would leave a few days later because I was feeling really weak and didn’t feel like I could move myself,” said Gardner.

She received her isolation assignment a full day before being transported by bus to Wells Hall. Gardner was isolated there for the remaining isolation period after her positive test came back.

Wells Hall and the Miami Inn are being utilized this semester only for isolation. Dodds Hall, which housed quarantined students last year, is undergoing renovations. According to Assistant VP for Health and Wellness Steve Large, these are the only two buildings not being used for general student housing.

Wells Hall is being used exclusively until there is no longer room to house quarantined students. When and if it becomes full, the Miami Inn will be used. According to Large, Wells has 79 rooms and as of Thursday, had four students living there in isolation.

“If we were to exceed both of these spaces, then we would consider assigning two students to each isolation room rather than just one student per room,” said Large.

The overall process of quarantining students is expected to return to a very similar look as last year’s process with the contract renewal. Leser hopes that students continue to follow the appropriate procedures to avoid the unnecessary spread of the virus.

According to the university’s COVID dashboard, as of the 14-day period ending Sept. 20, there were 55 active student cases of the virus on campus and 17 active cases among university employees.