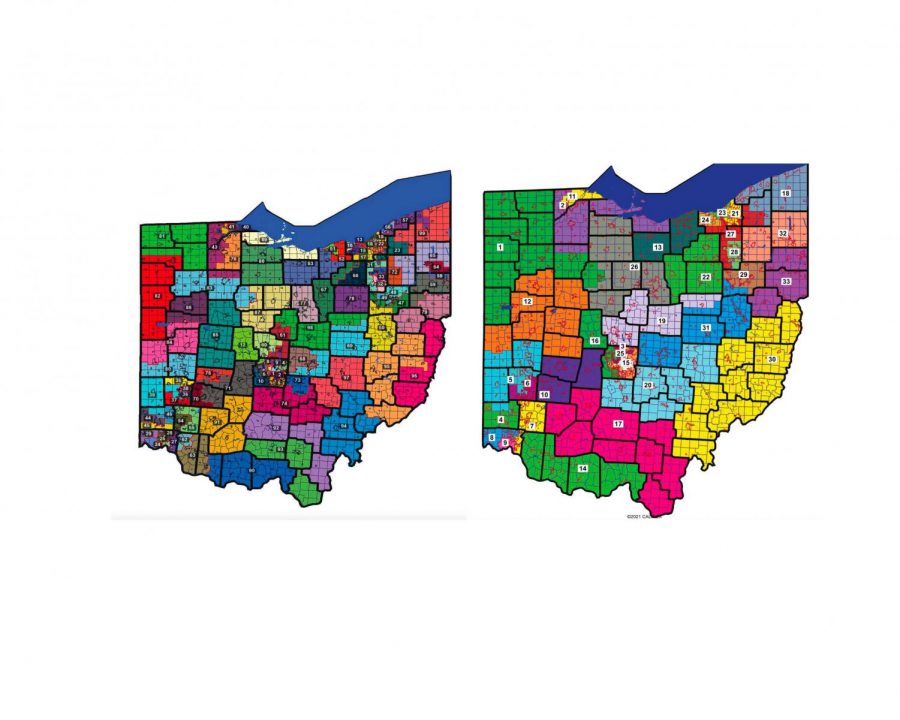 Maps provided by the redistricting commission

Shortly after midnight Sept. 16, the Ohio Redistricting Commission passed revised district maps for the Ohio Senate and the Ohio House of Representatives, on a 5-2 party-line vote.

Emilia Sykes is the daughter of Vernon Sykes. The two are the only Democrats on the commission, and the only two who voted against the revised maps. They said the maps have been drawn to favor Republican candidates and do not accurately represent the voters of Ohio.

Every 10 years, the district lines must be redrawn for the Ohio Legislature and the U.S. House of Representatives. Because the commission voted in favor of the maps but did not have the support of the minority party, they will only last for four years instead of 10.

“As the only woman on this commission, I take my responsibility incredibly, incredibly seriously. And beyond just what this vote may mean for a 10 year map, I bring with me those women who suffered for generations for the right to speak up so that someone like me can have the audacity to stand up and speak out on a commission that is made of six men and one woman,” Emilia Sykes said before casting her vote against the maps.

“I recognize that the men, and the majority party on this commission, have never had ancestors or the experience of having to fight for their access to basic human rights that others enjoyed simply just because they were born,” she said.

The Republicans on the commission expressed concerns with passing the most constitutional maps possible, although they admitted that the ones recently passed do have problems. The Democrats have criticized the fairness of the maps and how closely they represent Ohio voters. Each party is concerned about how redrawing the districts may split up communities.

Talawanda School District is one community split by the House map. The townships of Oxford, Reily and Hanover would be in the same House district, but Milford Township would not.

Hall could not be reached for comment on the new district maps.

The new maps also would carve Hanover Township out of the Senate District it is now in, and residents there would no longer be represented by George Lang.

On Tuesday Sept. 14, the League of Women Voters (LWV) of Oxford held a forum to educate people on the redistricting process. LWV of Oxford Co-President of Organization Jenny Fisher and General Member Dana Miller led the forum. With the Sept. 15 deadline to approve maps looming, the two urged the audience to call members of the commission in an attempt to change their minds.

“The redistricting commission was a predictable charade of political theater where all parties really knew what the outcome would be,” Miller said. “The only fair way to draw maps is to have an independent commission.”

Census data is usually released in April in the years that the maps are redrawn. Because of the coronavirus pandemic, the census was delayed. As a result, some data was released mid-August, and all of the data was released the last week of August.

This gave officials about two weeks to redraw the maps, a process that usually takes three months. Many Ohioans are upset with the rushed process.

An amendment to the Ohio Constitution passed in 2015 with support from over 70% of voters says that if a four year map is passed, the majority party must explain how it accurately reflects the voters.

A statement released after the vote by Republicans on the commission said, “The Commission determined that the statewide preferences of the voters of Ohio predominantly favor Republicans.”

“I am disappointed by the Ohio Redistricting Commission’s last minute vote on two district maps that were not provided earlier to the public,” Fisher said. “The questions asked by Secretary of State LaRose after the vote was completed signaled how little the voting members knew about the map. The commission did not appear to be open to bipartisan collaboration and therefore was seeking a four year map. Ohio mapmakers have once again put political parties above the interest of voters.”

Huffman said the maps that were passed would likely give Republicans an advantage of 62-37 in the House and 23-10 in the Senate. These are both veto-proof majorities. There are about 23 competitive districts. Eleven of those districts currently have a Republican in office and 12 are currently occupied by a Democrat.