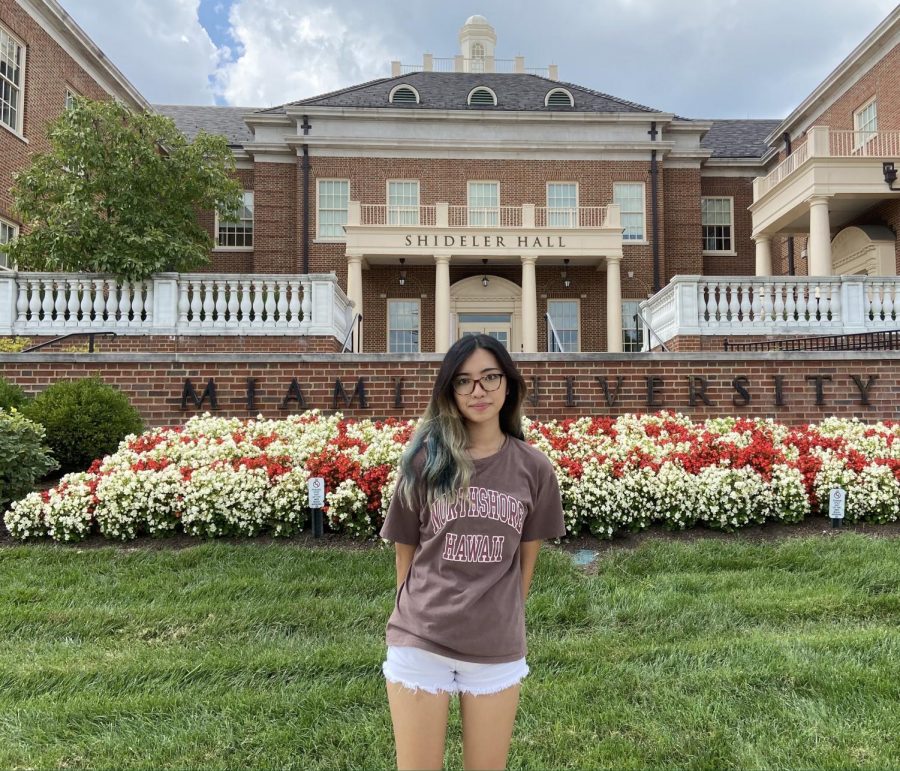 Anh Ngo, an international student from Vietnam, says she is excited to be back on Miami’s campus this year.

By Michelle Miao and Claudia Zaunz

Despite new rules about masks and vaccines, many of Miami’s 2,083 international students feel lucky to have gotten back to Ohio at all. The pandemic took a hard toll on these students’ ability to learn, and negatively affected their enrollment numbers.

Senior Associate Director for International Enrollment, Aaron Brixler, said that only around 100 new international undergraduate students started their college adventure this semester, though the final count will not be made until Sept. 13.

Back in Fall 2020, the international undergraduate admissions office saw “that a lot of freshmen international students decided not to accept the offer of admission and not to enroll because it was so uncertain both in the U.S. and in their home countries,” Brixler said.

According to him, students requested to defer their admission for a semester or a year. In general, Miami University received fewer applications, even in Fall 2021, which resulted in fewer students enrolling.

“Five or six years ago, the number was almost closer to 600 freshmen at the top,” Brixler said.

Enrollment numbers of Chinese students, who make up the majority of Miami’s international student body, were in slow decline since 2015, said Dan Sinetar, coordinator for International Student and Scholar Services (ISSS). In 2016, a total of 2,355 Chinese students were attending Miami. By 2020, that number dropped to 1,643.

“I think there’s lots of reasons for it,” Sinetar said. “It’s tough to comment [on] because there are so many factors. Politics is one of them, and economics is a big one.”

For the 2020-2021 school year, ISSS estimated that Oxford campus tuition, including classes, housing, and meals, cost $57,598 for international undergraduate students. For domestic, out-of-state students, the tuition is estimated to be $52,640, while students from Ohio are estimated to pay $31,624.

“Speaking to Chinese students studying in the U.S., another reason (cited) is due to it not being as much of a novelty for them now,” said Sinetar.

In recent years, “China itself has done a very good job of creating more places to study in their own country, and increasing the quality of their institutions,” Brixler said.

COVID-19 added an extra layer of difficulty. When the pandemic first started, some students found it impossible to return home, either because of lack of flights or travel prohibitions from their home countries, said Sinetar. Students who did return to their home countries also found it difficult to return to the United States for the fall semester.

Visa appointments became one of the main challenges, no matter where foreign students were coming from. Newly-accepted students applied for J-1 or F-1 student visas at their local U.S. embassies, but often had to wait longer periods than usual because the embassies were working reduced hours or were temporarily closed. “It was a race against time for new students and for students who needed to renew their visas,” Sinetar said.

“Embassies were shut for a while, and some only opened this summer, so there was a huge backlog,” Sinetar said. Students who made all necessary preparations to travel were left waiting. “The question was, would they be able to get an appointment?” he said. “This was all outside of our control as well. We couldn’t control what the U.S. government was doing or really help students if they were having difficulties getting an appointment.”

The visa application process, stressful under normal circumstances, looks different for every international student. Depending on the international relations countries have with the U.S., different lengths of stay are granted to students.

Even students who did manage to fly back for this semester faced stressful journeys.

“At first, I felt a lot of anxiety and depression,” said Sunny Yu, an international student from China. “I was so happy when the U.S. lifted their travel ban so I could fly directly from China and not have to worry about quarantine stay in another country.”

Vietnamese student Anh Ngo said that many documents and COVID tests were required of her in order to fly back to the United States.

“There was a bunch of testing,” she said. “I had to wear masks and protective equipment for 20 hours straight on the plane to the U.S., and I couldn’t really breathe at all.”

Despite the ordeal of traveling back to Miami, the return of in-person classes was not just a welcome change but a huge relief from the living and learning situations many students had experienced overseas.

Yu and Ngo described living under pandemic regulations back home that were much stricter than Oxford’s regulations.

“In China, you have to have a QR code in every city,” Yu said. The code acts as a health pass, and the color changes if one has possibly come into contact with the virus. “When you enter grocery stores and public places, someone checks your code.” Yu said. “If there’s a breakout in a city, you can’t visit there and the rules become really strict.”

In Vietnam, lockdown continued due to a lack of vaccines. “I was in quarantine all summer and all restaurants were closed,” Ngo said. “Only the supermarkets and pharmacies were open, but we could only go out to get necessities.”

Graduate student Lina Scally, an international student originally from Morocco, who worked in France before coming to Miami, said that regulations are much stricter in the heart of Europe.

“In France, you have to prove that you have a test or are vaccinated just to go to a restaurant,” she said.

“If you want to have a social life, you have to get the vaccine eventually,” she said. “Getting a PCR (test) is not a long-term option.”

In Asia, both Ngo and Yu found it difficult to access required websites due to technical problems. Yu returned to her home city of Tianjin last November and said she had to use a VPN in order to complete her homework, due to firewalls and connectivity issues.

“I really lost motivation to actively participate. I was just trying to finish my classes and get credit at that point. It would be 2 a.m. and I would be lying in bed, on Zoom with the computer turned sideways. I didn’t really learn much, and it wasn’t instructive for me,” Ngo said.

Yu agreed the difference created challenging time management problems. Between China and the United States, there is a 12 hour time difference, and according to Yu, she barely saw her friends and family during the day because she needed to maintain a schedule that would allow her to virtually attend Miami classes.

“I went to bed around 7 a.m. and woke up at 5 or 6 p.m.,” she said. “I also got a virtual internship through Farmer (School of Business) and the company was based in London, so I had to adjust my schedule to their time zone too. For some internship meetings, I had to get up at 2 or 3 p.m. to get ready,” she said.

Even with the recent pandemic restrictions in Oxford, there is more freedom of movement here, according to Ngo. “I love it here!” she exclaimed. She was excited to get back to campus as a sophomore. “I was only here for about seven months last year, so being able to see my friends again and actually be in a classroom is amazing,” she said.

For Yu, the logistics of graduation depend on overcoming the pandemic. “I just hope everything will get better because I want my parents to be able to come,” she said.