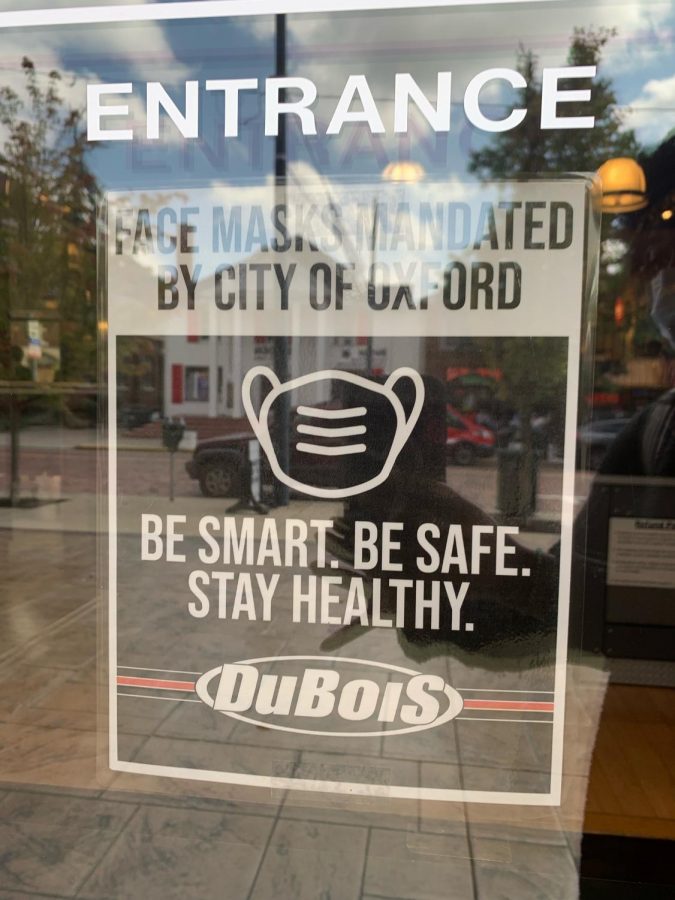 Oxford City Council authorized the city manager to implement a vaccination policy for City of Oxford employees and imposed an emergency mask mandate for all indoor public spaces, at a special meeting Monday, Aug. 30. The mask ordinance, effective immediately, applies to anyone over the age of 2.

The ordinance passed with a supermajority vote of 6-1, with Councilor Glenn Ellerbe being the only member of the body to oppose the ordinance.

Council attempted to approve the ordinance as an emergency measure at its Aug. 17 meeting, however, with only five council members present, it could not be passed as an emergency and was only passed as a first reading. Had it passed with a simple majority on a second reading at the regular Sept. 7 meeting, it would not have gone into effect until 30 days after that.

Mayor Mike Smith said council received more than 400 online and written comments, both for and against the mask mandate, prior to Monday’s meeting. Several people addressed the council in person during the meeting. Both sides of the debate were represented, however, those who opposed the mask ordinance were more vocal during the meeting and online.

There were common themes among those who spoke. Some people are concerned about how the mask mandate will affect local businesses, with an emphasis on bars and restaurants.

“This is something that has real impact on real business owners here in Oxford, and you need to think about that before you tell them they have to go back to another semester where they’re losing tens of thousands of dollars because they can’t have people at full capacity,” said Landon Halverson, a student at the university.

However, there are those who believe that enforcing a mask mandate will have the opposite effect if it keeps case numbers down.

Amy Shaiman said that many people don’t feel safe enough to patronize businesses uptown without a mask mandate. “What happens if the university shuts down (due to a dramatic increase in cases)?” she asked at the meeting.

One educator expressed concern for her students who work and patronize uptown businesses.

“This is a public health issue,” said Heidi Schran. “(Students) can protect themselves while they are in school, but they are not protected when they are at the businesses uptown.”

Schran is a teacher at Talawanda High School,  where students are required to wear masks.

Among the Miami students who attended Monday’s meeting, several voiced concern that the masks disrupt their college experience. Many of the students in attendance stated that prior to this meeting, they had never attended a city council meeting.

“I’m a junior, I have two years left in Oxford and I really just want to have the full college experience,” said John Cavanaugh. “I understand that there’s a lot of stuff going on, but last year is not what I would call a ‘college experience’.”

Before the fall semester began, the university announced that students would be required to wear masks inside all university buildings.

In an interview Wednesday, City Manager Doug Elliott addressed the concern around economic loss from the mask mandate. He said that this legislation is less restrictive than the mask ordinance, imposed last year and lifted this past spring, when COVID transmission rates declined. Before, businesses were required to have their patrons seated while eating or drinking. This time, that is not the case.

There were two amendments added to the emergency ordinance before it was adopted Monday. The first amendment, proposed by Councilor Ellerbe, was that the age requirement for those who must wear masks be lowered from 6 to 2, in accordance with guidelines set by the Centers for Disease Control (CDC). The second amendment proposed was that an exception be made for outdoor seating areas. Both amendments passed unanimously.

Ellerbe also proposed a third amendment, that anyone with proof of a COVID vaccination, be exempted from the mask mandate. He argued such an exemption would serve as an incentive for people to get vaccinated and as a reward for those who are already vaccinated.

Councilor Chantel Raghu argued that such an exception would be a mistake and that everyone should be wearing a mask. Raghu was absent from the previous meeting because her parents, both fully vaccinated, were hospitalized with the Delta Variant of the COVID-19 virus.

“I truly think all of us take death seriously,” said Raghu. “There are 13 servicemembers in Afghanistan that died. We never say, ‘it’s only 13’, right? If a police officer gets shot, we never say ‘It’s only one police officer.’” Even one death from COVID is too many, she said.

Councilor Jason Bracken and Mayor Mike Smith expressed their concerns over people producing counterfeit vaccination cards to get out of having to wear masks. They noted that many students around Oxford attempt to use false IDs in order to buy alcohol. According to a story published by the Associated Press, there are a growing number of students across the country buying fake vaccination cards.

The vaccination exemption amendment failed with only Ellerbe and Bracken voting for it. The fuller ordinance then passed in a 6-1 vote, with Ellerbe, the only council member not wearing a mask during the meeting, voting against it.

The ordinance is scheduled to expire Dec. 13, 2021, but can be extended at council’s discretion, which council members indicated they might do if COVID transmission rates remain high in Butler County. The expiration date coincides with the end of the fall semester.

Failure to obey the mandate can result in a $100 citation. However, Oxford Police Chief John Jones stated that the level of enforcement depends on what guidelines the city manager deems appropriate.

Elliott said that, initially, enforcing the mask mandate will be done with a soft touch. Businesses will receive notifications outlining the mask mandate and there will be signage posted around town. The public will also be able to submit complaints online about businesses that don’t enforce the mandate, he said.

“We’re not going to rely on the police to go out and issue citations [to individual people],” said Elliot. “They’re very busy this time of the year with students back,” and Elliott also expressed that the liability would fall more on businesses rather than individuals.

Councilor David Prytherch said he hoped the public would approach the mandate as a relatively minor inconvenience.

“The goal for this is to protect public health while still being able to live our lives in a more or less normal way,” Prytherch said.

Elliott will soon implement a vaccination policy for City of Oxford employees. The city employs at least 150 employees at any given time. All employees will have the option to report their vaccination status. If they are vaccinated, they will receive a $100 gift card and be exempt from weekly COVID testing. Those who choose not to report or choose not to get the vaccination must submit to weekly testing, Elliott said.

Miami recently implemented a vaccination policy as well. With the federal Food and Drug Administration’s recent approval of the Pfizer vaccine, every student will be required to show proof of vaccination by Nov. 22, 2021. Exemptions will be granted for medical reasons, sincere religious beliefs, or reasons of conscience, according to an email sent to students by the university. Students who fail to comply with the policy will not be allowed to register for spring semester. Employees who fail to comply will face discipline, according to the University.