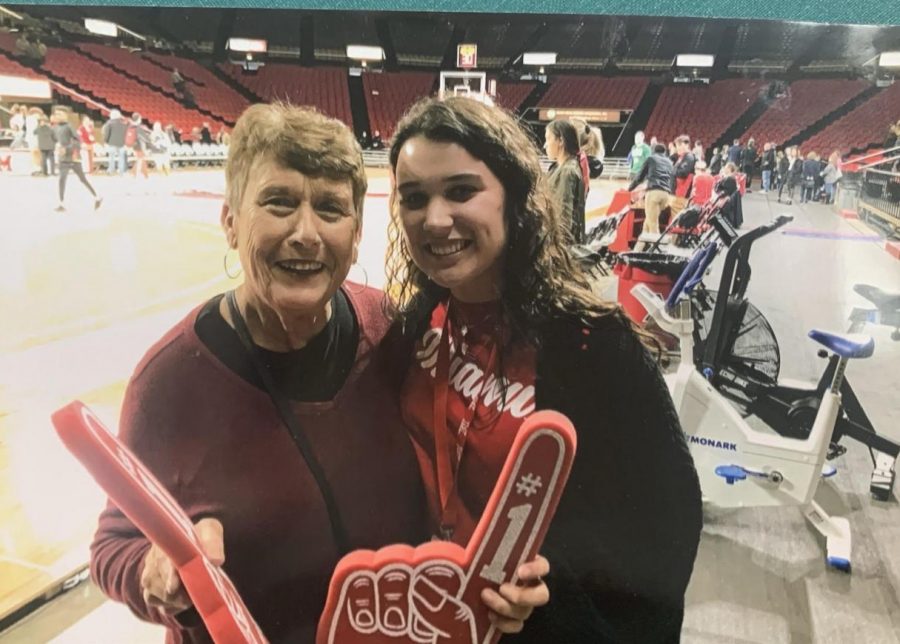 Marilyn Elzey with granddaughter Emma Lange with their Miami gear at Millett Hall.

Emma Lange represents the fifth generation of her family to attend Miami University. Now a senior, she is majoring in strategic communication and professional writing. As thousands of students pour back into Oxford this week, Lange reflects on how Miami has influenced her family and the families of others with Miami legacies.

For more than 200 years, Miami University has been filled to the brim with legacy and traditions. From kissing your soulmate under the Upham Arch to rubbing turtle heads and avoiding seals embedded in sidewalks and floors.

On top of Miami’s centuries of shared legacies, it is the legacy of the students that brings the campus to life. My family has been part of that legacy.

My grandmother, Marilyn Elzey is a Miami alum who followed the footsteps of both her mother and grandmother to Miami. Her daughter then carried on that tradition, and so did I. I am a fifth generation of women in my family to attend Miami University.

“After I graduated I decided to stay in Oxford,” said Elzey. “Miami is my home and I didn’t want to leave it.”

She married the golf coach, raised my mother and uncle on Timothy Lane, and now lives on Chestnut Street; a quick five-minute drive for when she wants to visit me on campus.

My family members are not the only ones raised as Miamians. Countless other families have legacies of their own. Adam Bencko is a junior at Miami from Cleveland. His parents also are “Miami Mergers” – alums who married.

“My house is like a Miami shrine,” said Bencko. “We have paintings and knick-knacks with the Miami logo everywhere.”

When choosing a university, Miami was always at the top of his list, said Bencko. “Farmer School of Business is a major reason I leaned toward Miami,” he said. “But really it was just the way I felt when I visited. It is the perfect place for me.”

I spent my summers in Oxford. I learned how to swim at the Rec Center, attended camps at Armstrong Student Center, and watched the parade go down High Street every Fourth of July. However, it wasn’t until I toured the campus that I got the real Miami feeling.

Jack Burrows,  a junior at Miami, had a similar feeling. Burrows, a New Jersey native, said Miami was the only school he applied to not on the East Coast. “I liked all the schools I applied to,” he said. “But the vibe at Miami was just the one I liked best. I could see Oxford becoming home.”

However, Burrows is not the product of a Miami merger – his parents met at the University of New Mexico. “I knew I didn’t want to follow in my parents’ footsteps and go to New Mexico,” said Burrows, “but never did I dream I would come to Ohio.”

The Burrows family has now begun its own tradition: Sabrina Burrows, a freshman psychology major and Jack’s little sister, followed her brother to Ohio. “I didn’t want to follow Jack,” she said.  “But when I visited, I couldn’t get over how beautiful it was and how it felt like a real university.”

Marilyn Elzey helps make Miami what it is. She was born with Miami red in her veins. Sixty years after graduating, she still works to keep the university running.

Reading college applications of prospective students, tutoring athletes at the Glos Center, being a political activist throughout the campus and university, her heart clearly belongs to Miami. “My favorite part about working with prospective and current students is it keeps me connected to the school. I know what things are working in the school system and which ones aren’t,” she said.

“I don’t think I shaped Miami,” said Elzey, “but Miami definitely shaped me into the person I am today.”

Meredith Clark, who graduated last May, recalls the way Miami shaped her. “I definitely had to grow up fast when I came [to Miami],” she said. “My experience wasn’t perfect, but I wouldn’t change it for the world.”

Clark shared that the only two schools she applied to were Miami and the University of Minnesota. She said her choice was made easier due to the academic scholarship Miami offered her four years ago.

“I solely based my decision on academics, not college life because the point of college to me is to prepare for the workforce,” said Clark, “and Miami has almost over-prepared me for adult life.”

The recent graduate works for the fashion merchandising department of Abercrombie in Columbus. “I still plan to visit Miami a lot,” she said. “I’m only two hours away and am not ready to fully part with Oxford.”

Sitting across from Elzey, wearing her red Miami logo T-shirt while reminiscing about her experiences, I see the embodiment of the university. “To be honest I don’t remember a lot of details about my time as a college student at Miami,” said Elzey. “After being involved in the school for 60 years, the memories kinda mix together.”

Elzey said that when I tell her stories about sorority parties or certain buildings I take classes in, she has a memory of a similar experience.

“My sorority sisters and I would hang out in the quad behind Dodds Hall in the spring,” said Elzey. “When I drive through campus and see students sunbathing in the grass, I remember my friends and I doing the same.” Being surrounded by students and college life keeps Elzey tied to the university in ways professors and administrators are not, she said.

“Some townies hate the students,” said Elzey. “They think that the students are trashing Oxford.” However, Elzey said she loves interacting with students and hearing about their experiences.

I was lucky enough to know my great-grandmother, Harriet Taggart, and hear about some of her experiences at Miami. Harriet graduated from Western College in 1937, the school for women at the time. Her experience was certainly different from my grandmother’s and mine, seeing as we attended Miami after it was integrated with Western College. Taggart went to a version of Miami that separated men from women.

“I didn’t feel pressure from my mother to attend Miami,” said Elzey. “It was my decision to come to Oxford.”

My mother, Vicki Lange, was born and raised in Oxford. Luckily for my grandmother, she chose to stay in Oxford and attend Miami. After my mother died in 2010, Miami wasn’t even on my radar for college. I am from Atlanta, Georgia, where southern schools are seen as the only schools acceptable to attend. However, I couldn’t shake this feeling that Miami was where I belonged.

My family legacy is Miami. My freshman-year dorm, Emerson Hall, is the same dorm my mother lived in her freshman year. “When I heard you were placed in Emerson I was shocked,” said Elzey. “That was the universe giving you a huge sign that Miami would be good to you.”

“You’ve sealed the deal,” said Elzey. “Your kids (will) have no choice but to come to Miami!”

Knowing that Elzey has been pouring her heart and soul into the university for more than 60 years gives me confidence in the institution that shaped the women in my family, and I hope, the future women of my family.