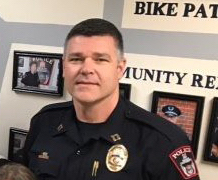 VanWinkle has been captain and operations commander of the university police for six years and a member of the department for 22 years.

“As the times change, police departments should also change to reflect the needs of the community,” he said in a press release.