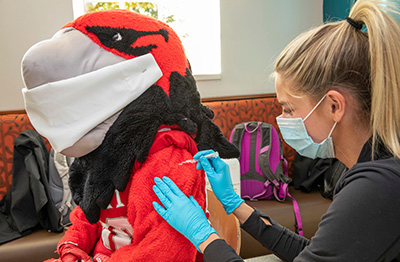 Miami reports on the number of community members who have taken the COVID-19 vaccines.

To help vaccinate more community members against COVID-19, both the city of Oxford and Miami University are incentivizing efforts to help those “on the fence” about the vaccine.

According to the Center for Disease Control and Prevention (CDC), Butler County, Ohio has a vaccination rate of 47% of the population with at least one dose of the vaccine and 44.6% who are fully vaccinated. Both rates trail the national average in the United States, as 59.1% of the nation has had at least one dose, while 50.3% is fully vaccinated.

To help increase those numbers, earlier in the year, Oxford City Council approved a program to introduce a mobile COVID-19 vaccination clinic, with those participating receiving a $100 Visa gift card.

Last June was the first time the van rolled out its vaccination efforts, landing at two separate stops. The first, was at a local church in early July, where pouring rain yielded only two Oxford residents coming out for a vaccination. The second, occurred on July 22 in accordance with Oxford’s Summer Concert Series, where seven Oxford residents approached the van to become vaccinated.

Jessica Greene, Oxford’s assistant city manager, said the program has gotten off to a slow start but hopes the van will gain some momentum with it used at more events in the summer and fall.

“I think it’s a slower start than what we originally thought,” Greene said. “I think it’s gaining traction however.”

The vaccination clinic has also been used at Parkview Arms Apartments in accordance with the Talawanda and Oxford Pantry & Social Services (TOPSS) mobile food pantry on Aug. 12 and 14. Earlier in the week, Greene said door hangers were used to inform residents of Parkview that free vaccinations and $100 were up for grabs.

Earlier in the year, a debate in Oxford City Council ensued on whether an incentive was necessary for the mobile vaccine clinic. Greene said the $100 might just be what it takes to get those with doubts to get vaccinated.

“I think the incentive is enough to get those who are on the fence to nudge some people to get the vaccine,” Greene said.

Currently, only nine of the 100 available gift cards have been used, meaning 91 are still up for grabs. Greene said if there are still left over cards from the vaccination efforts, Greene would suggest to city council that they be donated to local charitable organizations.

Greene also said the van is in the works at making appearances at future concerts, festivals and potentially Brick Street Bar & Grill. The biggest roadblock the efforts are currently facing, Green said, was finding the staff to help provide vaccinations.

“Brick Street wants the van to be out there every day, all day, but we just don’t have the staff right now,” Greene said.

Just a short walk away from Uptown, Miami University’s Oxford campus felt it needed the data of the vaccination status of students to help set future COVID-19 policies as more than 18,000 students will begin the trek to move in within the next week.

To participate, students must submit proof of their vaccination via an image upload to MedProctor, an immunization verification and compliance software.

After uploading, students are automatically entered into a drawing held on Tuesdays at noon EST for various prizes such as a bursar credit equal to one semester of in-state tuition, a bursar credit for one year of a Miami meal plan, box tickets to a Miami hockey game, $5,000 cash, $250 and $500 in bookstore gift cards, a MacBook Air laptop and an iPad Pro.

Carole Johnson, associate director of university news and communications for Miami, said as of Aug. 8, Miami has given away 32 prizes so far, which have included 20 $250 gift cards, five $500 gift cards, one iPad Pro, five one-year meal plans, and a $5,000 cash prize.

“Back in the summer, some of the students and administrators were trying to figure out ways to encourage and incentivize students to upload their information to MedProctor,” Johnson said. “We really use that data to help us set policies to figure out what we’re doing on campus.”

Johnson said that under the HIPAA Act, the University cannot require students to unwillingly reveal their vaccination status. But, by incentivizing the process, Johnson said she felt it was a way to excite and get students’ attention.

“We were trying to come up with ways that really would excite students,” Johnson said. “Because it was summer, we needed a way to get their attention…, and a way to say we’re serious, we’re all going through the pandemic and a major, major international crisis, and we wanted to do our part to help keep everybody safe.”

Johnson said they have seen an increase in vaccination statuses submitted through MedProctor, although exact numbers were not available.

“We’re definitely seeing a good increase, ” Johnson said. “And it keeps growing, and that’s the goal.”

Miami announced a new incentive for its staff on Aug. 11. Staff who submit their vaccination status on a form to the university will receive two days of bonus leave that can be used in lieu of vacation days over the winter break.

Other local governments also are offering incentives. The Hamilton County Commissioners (Cincinnati area) announced Thursday it would be offering $100 gift cards to people who sign up for vaccinations.