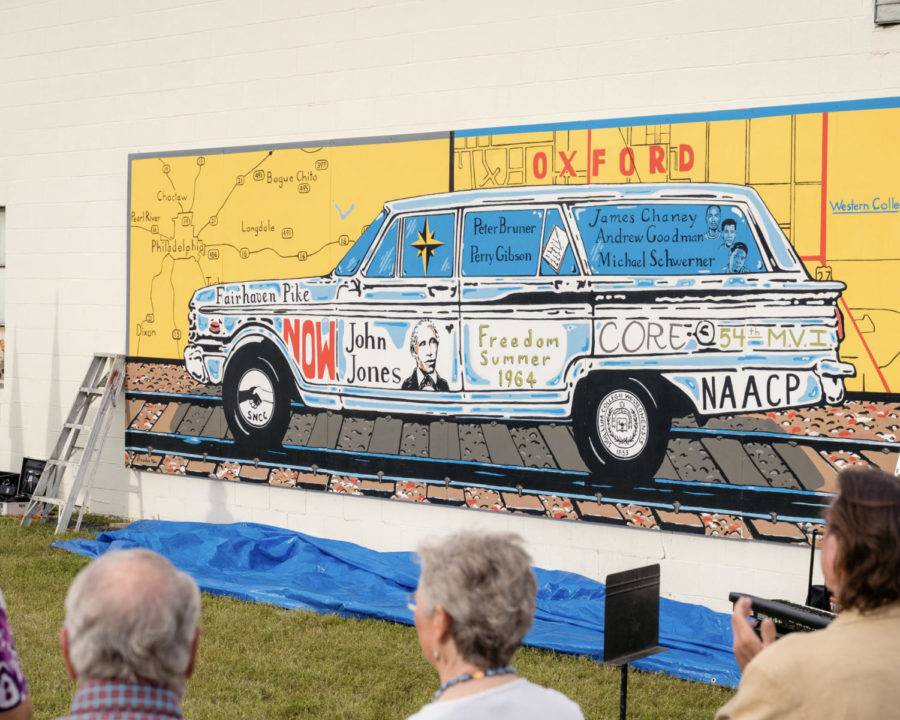 The mural as it appeared when installed in its original location on the exterior wall of the Rittgers & Rittgers Law Firm, on High Street, in 2019.

In early July, the “Changemakers of Oxford” mural commemorating the 1964 Freedom Rider martyrs who trained in Oxford, will be installed at its new location on the side of the Oxford Municipal Building, 15 S. College Ave.

The mural was recently detached from the outside wall of the Rittgers & Rittgers Law Firm on High Street, which overlooks a previously empty lot. That lot will soon be under construction for the Caroline Harrison Building, so mural creator Ella Cope had to find a new home for it.

Cope, an Oxford resident, came up with the idea for a public art display in 2018, to complete her Girl Scout Gold Award, while still a student at Talawanda High School. After more than a year of researching, planning, fundraising, and constructing, the mural was unveiled in the summer of 2019. Since then, it has rested on a detachable plywood frame screwed into the wall of the law firm, until Cope got the news that construction would soon begin on the Caroline Harrison building.

“When you’re doing the (Girl Scout) project, they really try to coach you to be able to measure the impact of your project and to be able to prolong its life. I thought I had about five years of time at that location,” Cope said. “But construction began a lot sooner than I thought, so it’ll be two years since the mural was originally installed. So, a little less time than I had planned, but it’s okay, because it was designed for that.”

Cope said she hopes the mural will have even more visibility on the municipal building than it did at the law firm. Visibility is key, Cope said, because public art “allows the town to put its identity on center stage for visitors.”

“I think it’s important to have landmarks that talk about and memorialize and celebrate the history of the civil rights struggle, because what we don’t remember, we forget,” Cope said. “It’s very important for landmarks like this to exist, because people need to know how important Oxford was to that struggle in terms of Freedom Summer, the Underground Railroad, and other social justice issues like gender equality.”

Specifically, the “Changemakers of Oxford” mural honors the civil rights activists James Chaney, Michael Schwerner, and Andrew Goodman, volunteers who trained at the Western College for Women. This training allowed them to drive down to Mississippi to help register Black voters and teach literacy at Freedom Summer Schools. On the way to one such school, Chaney, Schwerner and Goodman went missing in their blue station wagon. The burned-up car was found a few days later and the bodies of the three men were found six weeks after their disappearance.

The story of the Freedom Summer of 1964 and the murdered activists struck Cope when she was a third-grader working on a school project that looked at her local community’s history. Almost a decade later, after months of research and conceptual design, Cope was able to put that knowledge to use in an 8 x 24-foot work of art that covers Oxford’s centuries of civil rights activities.

“It was just deeply fascinating to me, because I got to learn all these stories about people who existed here in Oxford, who were really influential and actually had a big historical impact, and yet their names have been lost in the value of time,” Cope said. “So, it was really special for me to learn about those people and be able to bring those people back into the collective consciousness.”

With the help of Miami University historian Jacqueline Johnson, Cope will even further spread the word about these “Changemakers” when she presents at the National Civil Rights Conference, which will be hosted in Oxford on June 20-22. In this case, the moving of the mural worked in Cope’s favor, because she’ll be able to display it at the conference before it goes up on the municipal building in July.

Cope hopes to focus her presentation on the content of the mural, breaking down each person or organization referenced in the artwork as well as the story behind each component.

“I’m really excited to have an audience of people who are interested in all of the little minute facets of the mural,” Cope said, “and all the stories that went into creating this picture of civil rights history.”

Cope will present on June 21, the same day that the city will host a memorial to acknowledge the lynching of African American men that occurred in Oxford in the late 1800s. Councilor Edna Southard, who belongs to both the Historic and Architectural Preservation Commission (HAPC) and Public Arts Commission of Oxford (PACO), touched on the importance of the mural and memorial.

Southard also mentioned the timeliness of the “Changemakers” mural, with Chaney, Schwerner and Goodman fighting so hard for voting rights back in the 1960s while current voting rights are under fire today.

“So many people lost their lives and suffered so much so that people can have the right to vote,” Southard said. “So, this is extremely timely right now, when voting rights are under attack. This is so important for democracy. We can’t solve all the national problems by ourselves, but we can do something locally here and now.”

Cope also feels motivated by the current political climate surrounding voting rights. She was supposed to speak at the National Civil Rights Conference last year, but it was canceled due to the pandemic. Shortly afterward, protests started breaking out across the nation.

“(The events of the mural are) stunningly paralleled by examples of racially-motivated, and police-inflicted violence that we’ve seen over the last year and stretching back through this country’s history,” Cope said. “I think that idea of unintended and unwanted martyrdom is really fresh in people’s minds too, and so I think people might be thinking about Goodman, Chaney and Schwerner in the mural this year in a different way than they would have in 2019.”

Cope still has to go before the City Council to get final authorization for placing the mural up on the municipal building. She said she hopes to finalize that at the upcoming meeting and get the mural up in early July, right after the conference. Southard said that the city is also authorizing a plaque to go up on the municipal building next to the “Changemakers of Oxford.”