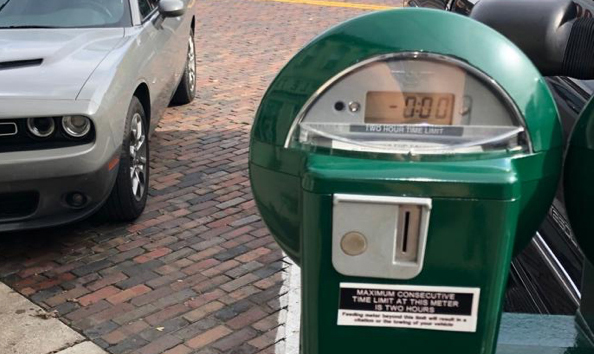 Fines for parking meter violations in Oxford declined by 28% over the last year.

With the COVID-19 pandemic, the Oxford Police Department’s (OPD) take on parking violations has decreased 28%.

During the pandemic in 2020, OPD did not enforce meters for several months to relieve a burden from the community and uptown businesses. Enforcement resumed in January. As vaccinations have increased and COVID-19 restrictions have been lifted, more people are parking Uptown, where most of the parking meters are clustered.

Ticketing will increase in 2021 with the City Council’s recent approval of 367 new meters and 12 new parking kiosks. The Council was adamant about keeping a coin-meter option Uptown for accessibility purposes. OPD is also lobbying to extend the meter time to 8 p.m. instead of 6 p.m.

The city has three full-time and four part-time parking enforcement officers, said Lt. Lara Fening, whose duties include overseeing parking, among other things.

The base fine for an expired meter is $10. Though the sum of ticket revenue has decreased with the pandemic, the average cost for all parking violations has increased since 2016 by $2. This means there has been an increase in other violations besides expired meters, like wrongfully parking in a handicapped spot.

In 2020, the OPD made almost $150,000 in violation fees, not including late fees. These were collected from over 7,000 citations. After meter violations, the top three citations were parking where signs prohibit, in a yellow zone, and in a handicap spot.

Many of these expired meter tickets are from repeat offenders, specifically delivery drivers, according to Fening. With increased popularity of food delivery, this is common.

“I get a lot of appeals regarding meter violations from delivery drivers in Oxford who run in to grab food,” Fening said.

Fening says that there are more meter violations than other violations. If unpaid, violators will incur a late fee. With two or more tickets, violators’ cars will be booted – meaning a boot-shaped device is affixed to a car’s wheel so the car cannot be driven away.

“A large number of tickets go unpaid,” Fening said. “The camera system is helpful for this but has more potential than we use it for.”

Angela Schatzle, who also works in the parking department, handles the data entry for OPD parking. She said the camera helps officers know where to ticket and boot.

“You may see a lot of boots Uptown,” Schatzle said. “That’s because we are able to monitor unpaid tickets with the camera. We call this ‘Scofflaw.’ ”

Scofflaw is when people avoid paying their tickets and have outstanding fines. OPD impounds or boots cars requiring owners to pay their fees and the cost of the boot.

According to Fening, much of the revenue from parking fines goes into new meters, kiosks, and general upkeep and enforcement for the city’s parking and general fund.