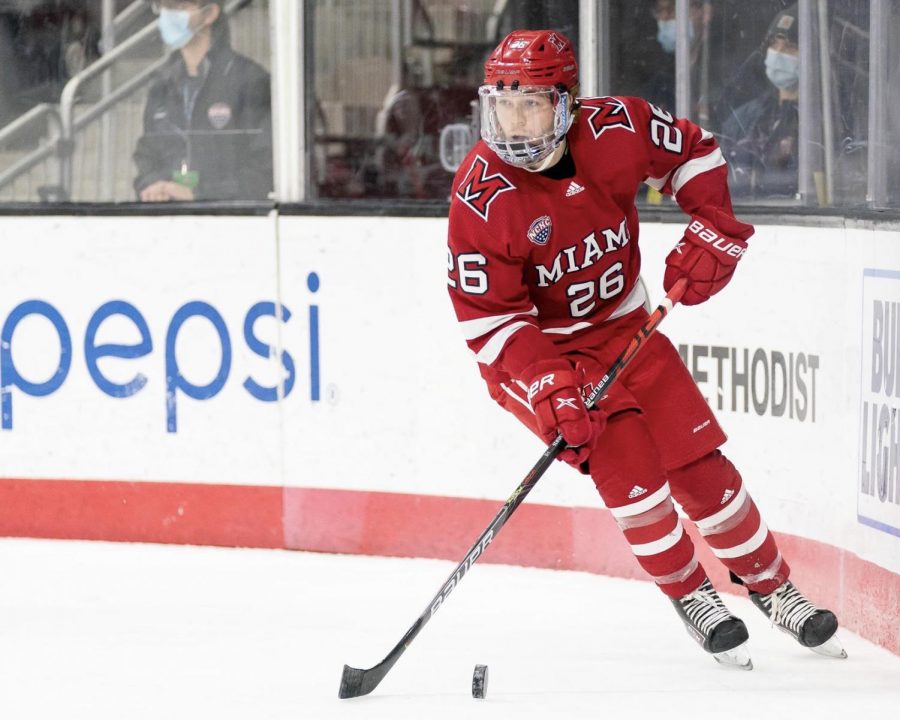 The Miami University hockey team is getting ready for its 2021-22 hockey season.

“Since last year with COVID, we only played in conference, next year I am really excited about the out-of-conference games,” said senior forward Mathew Barry. “I’d say Bowling Green being a rivalry, those games are always fun.”

The team graduated six players two weeks ago. This is going to leave gaps that need to be filled by incoming players in the team’s roster.

“Where our program is is not where it is supposed to be in terms of competitiveness. Our focus with next year’s team is going to be our forwards,” head coach Chris Bergeron said. “We lost four forwards and we are going to bring in five. We are adding three defensemen and two goalies.”

The team is also going to have six transfers coming in. Starting next year NCAA hockey transfers will be immediately eligible to compete. In previous years transfers were not allowed to play for their first year at a new school.

The team was not allowed to host any recruits on campus due to COVID, although some had visited pre-pandemic.

Miami is hoping to have full attendance at hockey games next year. This past year, only family members of the players were allowed to attend games.

“The goal is full capacity, but we are going to go with what health officials say,” said Kevin Ackley, director of Goggin Ice Center.

Miami especially wants full student sections to cheer on the hockey team when it gets back on the ice in October — along with all other teams.

“All the teams want more fans; they get a lot of energy from fans cheering for them,” said Athletic Director David Sayler. “The priority is the students, then the general public.”

The athletic department has not yet made an official statement about attendance capacities for next year, except that it will follow all health mandates. However, it has begun selling season tickets for the football team.

“The guidelines have been eased since they first came out,” Sayler said. “If numbers continue to improve, we will see more attendance next year.”

During the team’s previous season, COVID restrictions not only affected hockey games but also the preseason schedule. Players were unable to have their normal August and September training.

“We weren’t allowed to practice in the rink or work out really,” Barry said. “So it was just getting into game-shape really fast and playing a lot of games in a shorter amount of time.”

As to players and vaccines, the NCAA has not yet released an official statement about whether players must get vaccinated.

“There are rumblings about things coming out in the next few weeks,” Sayler said. “There have been rumors about vaccinated student-athletes being exempt from contact tracing and possibly even testing.”