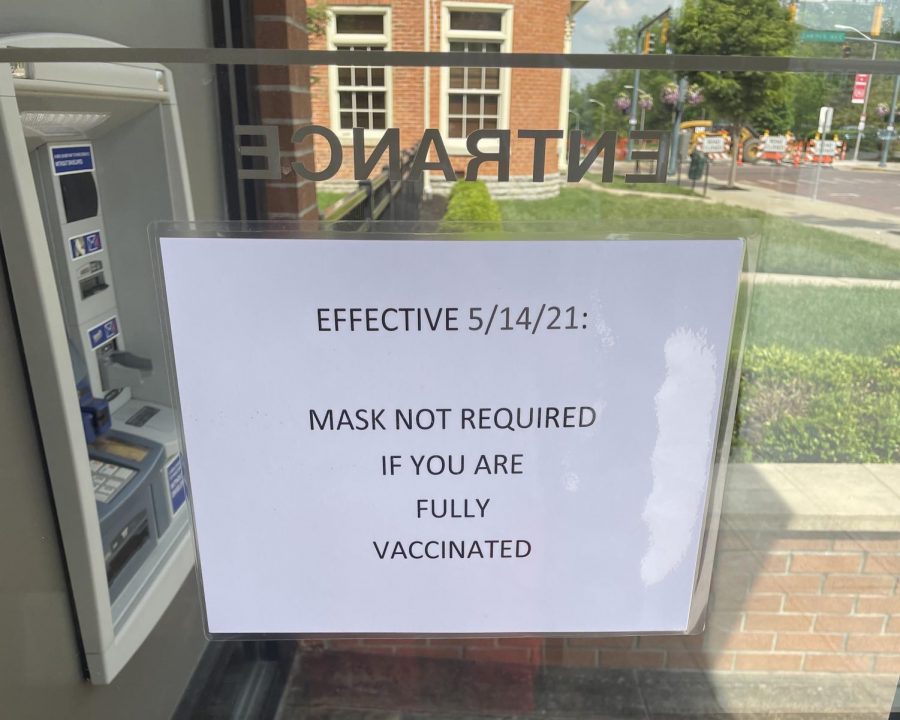 This sign on the door at Dubois Book Store, 118 E. High St., on Thursday, shows that some businesses still want unvaccinated people to mask up -- at least for now.

The city issued an email Thursday morning that although the State of Ohio’s current health orders continue until June 2, Oxford’s local laws no longer require masking up.

The original ordinance went into effect July 14, 2020, requiring residents to “wear a face covering over the individual’s nose and mouth and chin” anytime they entered a business, city facility, public transportation vehicle, or outdoor space within six feet of another individual. The ordinance adhered to CDC recommendations and Ohio Department of Health regulations.

The repeal was tabled at the previous meeting on May 4, where the city also repealed the ordinance limiting outdoor mass gatherings. Councilor Edna Southard said that decision was made with the knowledge that Miami’s graduation weekend was coming up, and many family members from out of town would be visiting the city.

The tabled mask repeal also occurred before Ohio Gov. Mike DeWine’s announcement on Wednesday, May 12, that he would rescind pandemic health orders for the state by June 2. Along with this pronouncement came news from the CDC that fully vaccinated individuals no longer have to mask up outdoors or in most indoor settings.

When Southard attempted to table the repeal until the June 1 council meeting, the motion failed in a 4-3 vote. Southard argued for continuing to wear masks until DeWine’s new orders went into effect and the CDC provided more recommendations.

Vice Mayor Bill Snavely expressed his support for repealing the mandate, citing how the council followed the CDC’s and DeWine’s recommendations when implementing the mandate last summer. Following their recommendations now that it’s safe for fully vaccinated people to not wear masks should be no different, Snavely said.

Southard, however, brought up during the meeting how it will be impossible to know who is fully vaccinated and who is not. The entire council agreed that if they repealed the mandate, they should also coordinate an educational effort with Assistant City Manager Jessica Greene to encourage unvaccinated individuals to continue to wear masks.

The council also confirmed that individual businesses can still require facial coverings to be worn within their establishments. Gaslight Brewhouse Manager Adam Kelly confirmed that employees will still be wearing masks for the first two weeks or so after the health orders are lifted on June 2, but they would feel out what customers wanted in terms of wearing masks at the restaurant.

“I expect the public to respond kind of in waves like they did the last time we did all this,” Kelly said. “I want our guests to feel nice and comfortable coming in, but we still don’t know who’s vaccinated or who’s not vaccinated. We’ve got people to protect, we gotta take care of our staff.”

Ann Kamphaus, the owner of Church Street Social, said she decided she would leave it up to the customers to decide if they want to wear masks in the establishment or have their servers wear masks.

“If people are more comfortable with my staff wearing a mask, we will, but as of now everybody that works here is vaccinated, and we probably won’t be wearing them,” Kamphaus said. “I’m ready for business as usual. It’s not mandated anymore, so we won’t mandate it either.”

Larger corporations like Kroger and Walmart both say that fully vaccinated shoppers can go maskless in their stores, but neither store will ask for proof of vaccination. Walmart also expressed that it will follow local and state regulations whose jurisdiction their store falls under. So, until June 2, masks will still be required in Ohio stores.