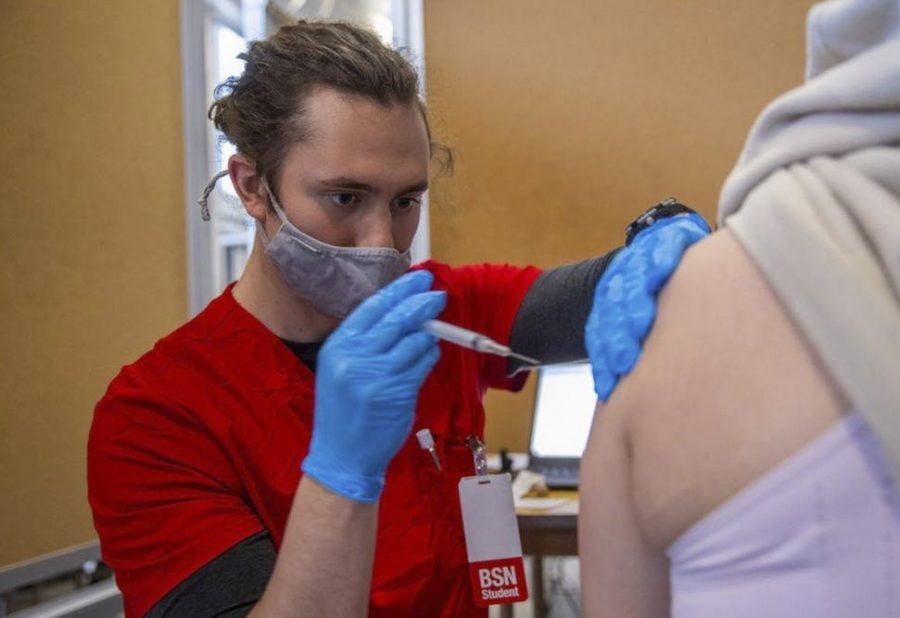 As of this week, fewer than 44% of Butler County residents eligible for COVID-19 vaccinations have gotten the shots.

After serving 17 years and being deployed to three overseas tours with the United States Marine Corps, 40-year-old sophomore nursing major Ray Fitzpatrick traded in his military garb for nursing scrubs to help administer more than 1,300 COVID-19 vaccinations to the Miami University community.

“There’s a few of your non-typical students that are a little bit older here, but I would venture to say that I’m probably older, if not the oldest – I’ve gotta be close,” Fitzpatrick said. “That’s not a trophy I really want, but I’ll take it.”

Fitzpatrick, a resident of nearby Mason, Ohio, retired from the military after he suffered a non-combat injury to his neck. Through Veterans Affairs benefits, he decided to take classes under the Miami Hamilton nursing program, with hopes of eventually working his way up to becoming a flight nurse.

“Due to my Marine Corps experience, I originally decided I wanted to help wounded troops,” Fitzpatrick said. “The medical career always seemed interesting to me, and I decided to take that a step further.”

“There has been a standardized training that has been established by the Ohio Department of Health for anyone handling and administering the COVID-19 vaccines,” Nicely said. “All of the students went through this training as part of their clinical course.”

When Fitzpatrick heard about the program, he knew he wanted to help.

“I raised my hand to volunteer when I first heard about it; I knew it was something that I wanted to do,” Fitzpatrick said. “There was about 20 to 30 hours worth of work just to be ready to give the vaccine.”

After the training, Fitzpatrick worked two eight-hour shifts – one for Miami faculty, the other for students – giving out the vaccinations at Shriver Center in April.

Fitzpatrick said in those eight hours, he and other volunteers rotated around positions two hours at a time. He started off as a greeter, then moved to help fill out information for patients, then helped to administer vaccines and finally monitored patients for fifteen minutes after shots were administered to ensure no side effects occurred.

“It was definitely positive to get that hands on experience,” he said.

Brooke Flinders, chair and associate professor at Miami Hamilton’s nursing program, said she appreciated the work done by Fitzpatrick and the other students.

“I think it’s inspiring that Ray, a 17-year Marine Corps veteran, and so many others like him, bring their professional and life experience to our discipline,” Flinders said. “Miami is proud of the diverse student population we serve and of the high-quality practitioners our program prepares.”

Mike Croy, a fellow sophomore nursing major at Miami Hamilton, also recognized the work Fitzpatrick was doing within the community.

“We are very different people but it doesn’t stop us from joking about and generally having a great time when we are working together,” Croy said. “I certainly couldn’t recommend a better nursing student to work alongside because of his excellent personality and steady confidence.”

Fitzpatrick said he hopes the vaccines help to deliver a sense of normalcy to the community within the near future.

“A lot of people came through, and I think it’s one step closer to getting rid of this whole pandemic,” Fitzpatrick said. “I think it’s very important for people to understand that vaccinations are critical to public health and safety.”

Editor’s note: This story originally appeared in The Miami Student.