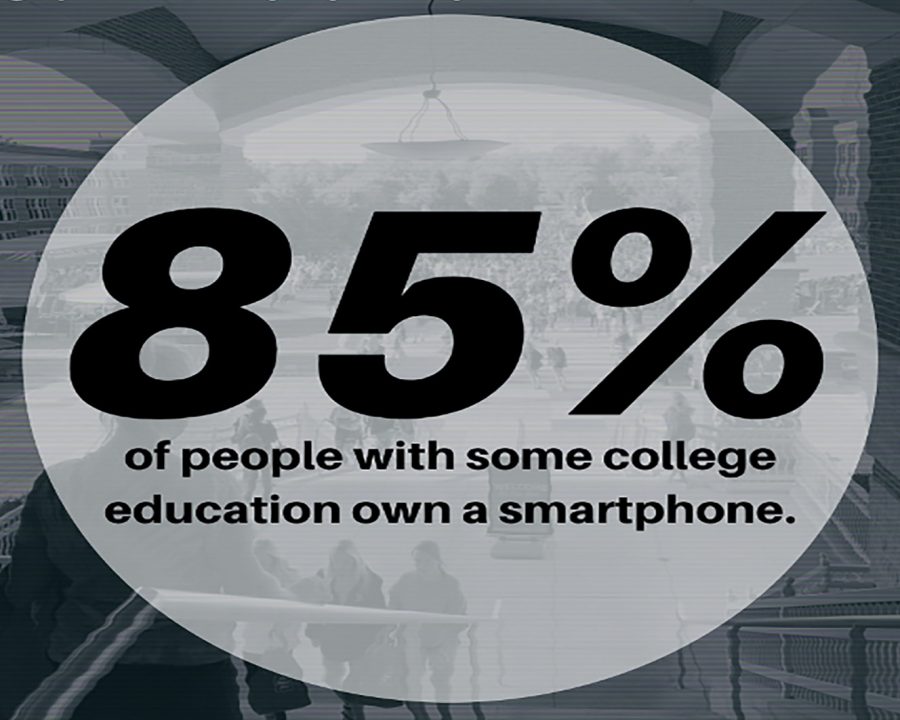 At their current rates of usage, many college students could spend 19 years of their lives on their smartphones.

For Riley Peters, her phone is an escape from daily activities.

Whether she is doing homework in her dorm room or standing in line for Starbucks, Peters said she finds herself struggling and often losing the battle of keeping her hands off her phone.

“I just can’t put my phone down,” the first-year Miami University student said.

A study published March 2 in Frontiers in Psychiatry, found that approximately 40% of college students are addicted to their smartphones.

The CNBC article, in which the study was mentioned, defined phone addiction as using a smartphone for more than five hours a day, a lack of control over how much time is being spent on it, feeling distressed without a phone or missing life activities as a result of phone addiction.

Peters, who said she thinks she’s addicted to her phone and she believes many of her peers may be too.

“I feel like I’m not ever in a place where I don’t see more than half the people on their phones,” Peters said. “We’re literally just standing somewhere and we’re all just scrolling mindlessly just to not look at other people.”

Peters said that when she is on her phone, she spends her time playing solitaire and scrolling through social media apps like Twitter and TikTok. The political science major said she thinks social media, in particular, keeps her attention because there is always something new to see.

“I don’t even realize that time is passing,” she said.

Mack Hagood, associate professor of Media, Journalism & Film at Miami University, teaches a class called “The Smartphone and Society” where he helps students take a closer look at technology and media.

Hagood said one of the ways that many social media platforms keep users hooked is by providing them with endless amounts of content; a tactic called infinite scroll. Apps that use this tactic include Facebook, Instagram, Twitter and TikTok.

Hagood said his students in his class calculate how many years of their lives they will spend on their phones if they continue at the current pace. On average, that figure usually sits around 19 years.

“They’re usually extremely shocked to see what the numbers are,” Hagood said. “A lot of them say wow…a whole lifetime that I’ve just had is it going to be spent on my phone?”

Hagood said he has observed downsides to constant phone usage like overstimulation and higher stress levels. The Frontiers in Psychiatry study also found that students with higher phone usage can suffer from poor sleep quality.

Nolan Wilson, a first-year student at Ohio State University, said he doesn’t believe he is addicted to his phone. He thinks he may be heading in that direction due to a heightened dependency on technology caused by the COVID-19 pandemic.

“I just sit here on the computer and then just sit on my phone during the whole class,” Wilson said. “(My phone is) a distraction.”

Wilson said that most of the time he is on his phone he is texting, scrolling through Twitter, refreshing his Instagram explore page or using Snapchat.

“I’ll turn to my phone to sit on it and zone out, which is like what people do with drugs and alcohol,” Wilson said.

Hagood said that Snapchat is another app that is designed to keep users coming back through the use of streaks; something that is obtained when two people Snapchat each other every day.

“The minute you open the Snapchat, there’s other stuff that’s going to grab your attention and keep you in there for maybe an hour when you didn’t even really want to open it that day at all,” Hagood said.

Hagood said he uses a book in his class called “Digital Minimalism” by Cal Newport, which theorizes that many apps actually do something positive but the use of all of them at once can be too much of a good thing.

“It actually winds up kind of taking control of your life, making me less happy and less productive,” said Hagood.

The solution to this problem, Hagood said, is not to throw away the phone but ensure that the apps people have downloaded are intentional and serve a purpose.