DeWine urges all Ohioans to receive the COVID-19 vaccine 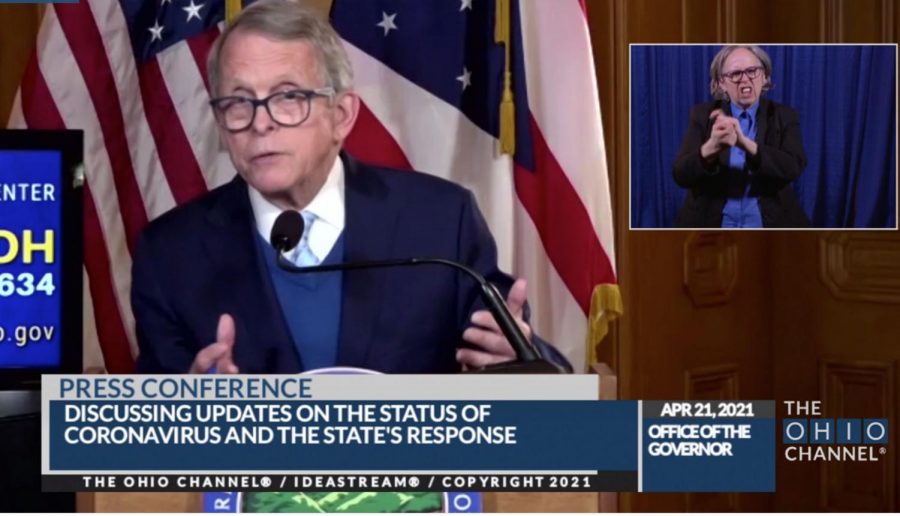 COVID-19 cases in Ohio are high, but starting to plateau again, which means it is more important than ever for people of every age bracket to get vaccinated, said Gov. Mike DeWine in a Wednesday press conference.

As of this week, nearly 40% of Ohioans have received their first dose of the coronavirus vaccine, and 28% of all individuals have completed both rounds of either the Moderna or Pfizer inoculations, DeWine said. Of the vaccinated, the older population has done a good job scheduling their shots. Of that population, 70% of each decade bracket 70 and older have received their vaccines, prompting a push of younger individuals to get their shots even though the virus historically affects older individuals harsher on average.

But according to DeWine and other state officials, that is starting to change. A new round of public service advertisements this week features young adults sharing when they decided to get their shots. In the commercials, the college-aged individuals shared that they went through the vaccine process in order to enjoy the things they did before the pandemic, as well as to protect their families and friends.

According to DeWine, there has been a strong showing of young Ohioans who have received their shots but there is also a stronger push to get more to receive their vaccine, saying that with the rise of variants, younger people who were not worried about contracting the virus before should change their minds now.

“What happens with our younger people is really going to determine when we reach herd immunity,” DeWine said Wednesday. Just over 18% of 16- and 17-year-olds in the state have received their first rounds of vaccine.

Miami University announced Friday it will distribute 420 doses of the Pfizer vaccine to employees and students, Tuesday, April 27, in the John Dolibois room in Shriver Center.

The vaccine was received from the Ohio Department of Health, are being distributed free of cost.

The university said it will give 200 doses to t employees between 8 a.m. and noon, and 220 doses to students from 1 p.m. to 6 p.m. Employees should register online here, for the shots. Students should sign up here. Those getting the shots will be scheduled to receive their second dose of vaccine on May 19.

The variant strains of the virus now circulating are reportedly easier to contract and are more likely to put people in the hospital, regardless of age, according to Dr. Bruce Vanderhoff, chief medical officer of the Ohio Department of Heath. Those variants may be up to 40% more contagious than the initial strain, he said.

In Ohio, as well as all other states, anyone age 16 or older are now able to register to get a vaccination. At Monday’s meeting of the Talawanda Board of Education, Superintendent Ed Theroux said the district is not requiring high school students to get the vaccines, and at this point has no plans to set up vaccination centers for students, but it does recommend everyone older than 16 get the shots. If families of students 16 and up have trouble finding a place to get the vaccinations, “you can send me an email, and I will help you find one,” Theroux said at the meeting.

Younger adults, who may have dismissed the threat of the virus initially, are now a greater threat to spreading the disease. That is because members of the older generations have been good about getting the vaccines and now enjoy a relatively high level of protection. But, the high levels of cases and hospitalizations in Ohio mean more and more younger people are being infected, said Vanderhoff and DeWine. 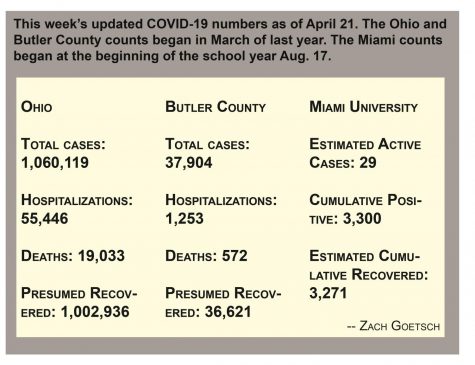 Two weeks ago, DeWine announced that colleges and universities across the state would receive vaccination doses to distribute to their students in an effort to get more young people vaccinated. That was part of his goal of increasing the vaccination rate amongst all Ohioans. Some of those institutions that had been about to give out doses of the singled-shot Johnson & Johnson vaccine, had to put those plans on hold as approval of the Johnson & Johnson vaccine was put on hold by federal health authorities after a very rare side effect was uncovered in six patients out of more than a million who had received that vaccine.

Miami University originally announced it would give students the Johnson & Johnson shot, but ended up distributing the Pfizer vaccine during a successful week of first doses during the week of April 11.