Marshall Elementary School is named after Maude or Maud? 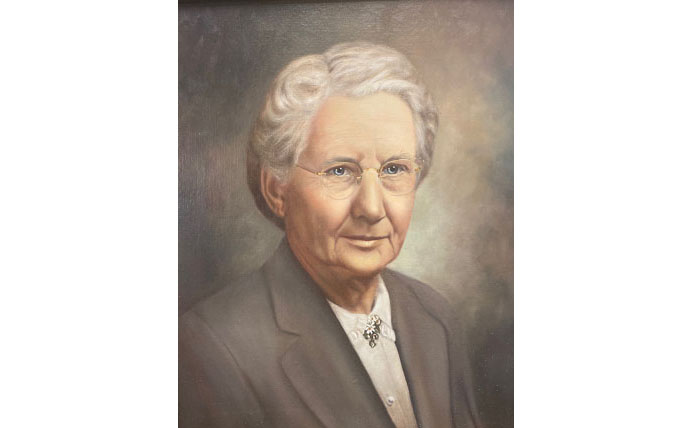 Maud Marshall’s portrait was hung in the Marshall Elementary School library when the school was dedicated in 1967.

The story in the Oxford Observer last week was about safeguarding pictures and memorabilia from the soon-to-be-demolished Marshall Elementary School came up with a bit of a mystery – how exactly do you spell the name of the woman the school was named after?

That’s easy, you say – Maude Marshall, the name is on the sign out by the driveway in front of the school on US 27. Except there is a sign over the building’s door that says Maud Marshall Elementary School. That’s Maud, without an “e.”

We reached out to Holli Morrish, director of communications and public relations for the Talawanda School District. Morrish said she went to Marshall Elementary School as a child and has always seen documents that list the name as “Maude Marshall.” That’s Maude, with an “e.”

But a portrait of Miss Marshall, found with the memorabilia mentioned in last week’s story, clearly was labeled “Maud Marshall.”

If you Google “Maude Marshall Elementary School,” you get eight hits, including the school’s district website.

As reported last week, Miss Marshall taught first grade at the long-gone Hanover Township School. She dedicated 51 years to serving the community as a teacher. She retired in 1954 and died in 1970.

When Talawanda built a new elementary school in 1967, the district received many letters from teachers, former students and others in the community that suggested it be named after Marshall. And so it was.

We dug into the name conundrum a little further by looking up her obituary on the “Find a Grave” website. There, the obituary that appeared on page 24 of the Aug. 3, 1970 Hamilton News Journal, says that Maud F. Marshall, 85, died at the Golden Years Nursing Home, where she had lived for four years. The obituary detailed her teaching career, including the fact that the new elementary school was named Maud Marshall Elementary, and that a portrait of her was hung in the school library.

The obituary site also included a picture of her with other faculty at the old Hanover Township School, all of whom seemed to have signed their names on it. There is a picture of her gravestone in Darrtown Cemetery. Both pictures clearly say “Maud Marshall.”

After this discovery, the question begs: Why would the Talawanda School District name the elementary school Maude Marshall when her portrait, gravestone and signature all say Maud Marshall?

The school that was new in 1967 is now coming down. It will be replaced by a new Marshall Elementary School that is being built right beside it. Before the new school is finished, someone should recheck the sign.

If you have any additional information regarding Miss Marshall’s name or her history with the community, please contact the Observer at [email protected].