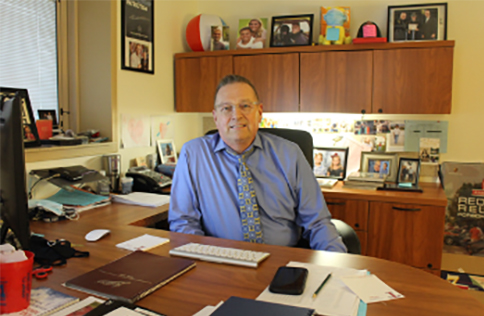 Tom York leads Talawanda High School from behind the principal’s desk for the past nine years.

On a rainy Friday afternoon, Tom York sits at his desk and wraps up work from the week. He’s surrounded by photos of loved ones and keeps a bulletin board of mementos from adoring students directly across from his desk. As his colleagues shuffle past, one-by-one, to head out for the weekend, York smiles warmly and fares each of them well.

Long before he sat behind the principal’s desk of Talawanda High School (THS), York walked the halls as a student and even won the title of THS Homecoming King during his senior year. York went on to earn his bachelor’s from Miami University and began his career as a social studies teacher at Edgewood High School.

“I get to touch kids’ lives every day,” said York. “I feel like I was called to do that 42 years ago. And I told somebody that I haven’t been uncalled yet. I’m still doing it. I still love to do it.”

Tom York has been principal at THS for almost nine years. An Oxford native and a 1969 graduate of THS, York is a veteran school leader and community builder. He has a slew of educational jobs under his belt including superintendent and assistant superintendent at Edgewood and superintendent of the nearby Madison Local Schools as well as a previous principal job at Hamilton City Schools.

Throw in an interim business manager, athletic director, guidance counselor and coaching role and you’ve about covered it. Besides his success as an educator, York has a son, Daniel, daughter, Lauren, son-in-law, Justin and grandchildren, Jackson and Lilly.

York developed a culture of community building at Talawanda through the use of his motto “relationships before tasks” or, in his social media friendly words, #RelationshipsB4Tasks. York signs off every email with this hashtag and posters with the motto can be found throughout the school.

York said the motto has become an integral part of THS culture, both in student and teacher relations.

“I thought if kids have a relationship with each other and they really know each other and the person sitting next to them, it’s going to be really hard for them to be mean to them,” said York. “So that’s why this became a very important thing. And then, it bled over to our teaching staff because we know, and they know that kids learn best from the people that they like.”

“[York] would put it all over social media and say it every morning on the announcements and essentially by that he just meant that the relationships among teachers, students and faculty were more important than getting good grades or living up to expectations,” said Benzing.

York’s colleagues also acknowledge #RelationshipsB4Tasks as a fundamental element of the THS culture. However, they note that York does not just declare this motto, he lives it.

“I mean, when I have something that I’m trying to figure out, I come over here and I sit in that chair that you’re sitting in and I say, ‘Hey, you got five minutes?,” said Morrish. “And he knows I’m never five minutes, but I shut the door and he’ll talk anything through with you. He’ll mentor you, he’ll be your extra dad, he’ll be your good friend, he’ll tell you hard stuff that you need to hear so you can straighten up. Yeah, he’s a good guy.”

To further reinforce the importance of relationships, York eats lunch in the cafeteria alongside students. He sits at a high-top table every single day making himself available to students who need a friend or a simple conversation.

With years of experience as an educator, York realized his job is comparable to that of an emergency responder: he supports students through challenges and develops a safe environment for learning and growth.

York wanted to remind the THS teachers of this significance associated with their jobs, so one day, he decided to head to the Oxford Fire Department to get plastic firefighter hats for each of his staff members. York wanted to take the reminder one step further, so he had each educator write something to stick on the front of their hat as a nudge for them to teach their best each day.

“For me, mine was, ‘every data point has a story, a face and a name,’ because data is always emphasized,” said York. “You’ve got to look at the data, but every one of those points is a child. If you know that that’s Bobby I’m talking about and I know Bobby doesn’t get a meal when he goes home and he doesn’t have a parent that loves him, then I’m going to really work hard to make sure Bobby learns how to read.”

Aside from his deep appreciation to build relationships and support his staff, York made technology a substantial part of his mission as an educator. As a believer in the power of technology as a teaching tool, he ran the first pilot program in Butler County for high school students to have a personal laptop.

During his time at Edgewood Schools, York built a collection of Apple computers for students and teachers to utilize in the classroom.

“I had the guy [Chris], who eventually became the tech director for me,  buy me an Apple computer and I used it for a month or so and I passed it off to an elementary teacher and said, ‘Hey, I bought this. I want to see how you like it,” said York. “So, I said, ‘buy me another computer, Chris. Hey, buy me another Apple.’ I used it for a couple months and I passed it off to another teacher. So, I did that half a dozen times and I kept putting Apple computers in the hands of my elementary people.”

York eventually bought a mobile cart filled with 20 Apple computers that the elementary teachers could schedule for classroom use. York saw powerful benefits of technology use in the classroom, but also found clever ways to use technology outside of the classroom.

Always point to the work of the students

“When we had board meetings, I wanted to always start the board meeting with children because all the people who were angry and nasty couldn’t possibly continue to be that mean if we have little kids there starting off the board meeting,” said York. “So, I started having teachers bring their kids in and present, using the Apple computers.”

When asked to describe their dad, York’s children, Daniel and Lauren, used words like “compassionate,” “dedicated,” “funny” and “smart.” His students agree.

“He is somebody who, in so many words, is too good for this world,” said Benzing. “He is so wise and so kind and is so humble about it. I don’t even think he realizes how impactful he is to people. He leads by example and he doesn’t need the recognition that comes with leadership. It’s more like he wants to represent people and make everyone feel seen and loved.”

Co-Assistant Principal of THS, Molly Merz, would also use the word “funny” to describe her colleague.

“He has dad jokes. So, we always joke, ‘Oh, cheesy dad’,” said Merz. “We have a really good time together and lots of laughs, but I have learned so much from him. I’ll be forever grateful that I started my administrative career working with him.”

Merz acknowledged York’s value of relationships and attested to his selfless and generous nature.

“He really has worked hard to provide me with opportunities to grow into who I am as a leader which is nice,” said Merz. “He’s not a micromanager by any stretch. He really respects people’s ability to do their job and he wants to remove barriers for people to do what it is they love to do. He is great about answering any questions or providing advice, letting you talk through things.”

Although York has served as an educator for 42 years, he does not plan to stop anytime soon. Serving in this role, he said, is what he’s meant to do.

“Faith is important to me. So, I’m praying and I’m saying, you know, God, I want to do something where I can touch kids’ lives in a real way. You pass a lot of papers over your desk and you do a lot of things like that, but I want to actually be there where they are,” he said. “And, you know, not too long down the road I had the opportunity to interview for this job. And I get to touch kids’ lives every day.”