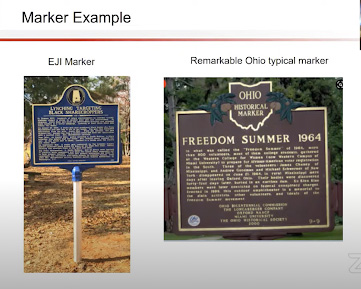 In an effort to remember and help reconcile issues of past racial injustice and violence in the city, Oxford City Council approved the placement of a memorial marker. Located in the Uptown Park, the memorial will recognize two black men lynched here in the 1800s.

In 2020, the Equal Justice Initiative (EJI), that helps communities memorialize victims of racial violence, provided guidance on the project to the city through a “The Truth and Reconciliation Project” seminar,  developed by the EJI’s Community Remembrance Project Coalition. The group recommended where the memorial should be placed in Oxford. The installment of the memorial was supposed to happen in 2020, but was delayed due to the pandemic.

After the idea was proposed to the Oxford city staff, the city reached out to Enjoy Oxford. Last year, they agreed to host a digital seminar to discuss what the marker means and the historical background behind it. This includes the inclusion of a QR (Quick Response) code on the memorial marker that directs people to more information about the topic.

In December, the project was approved by the city’s Historic & Architectural Preservation Commission. The proposal was forwarded to city council, who unanimously approved it March 17.

The marker will tell the stories of Simon Garnett and Henry Corbin.

In September, 1877, a white mob stormed the Oxford jail and shot Garnett, who was accused of assaulting a white woman. There was never a serious investigation behind the assault allegation, according to EJI. Garnett survived after he was shot in his jail cell. The next day the mob returned, shot him again, dragged him outside and left him to die.

The incident that involved Corbin took place Jan. 14, 1892. Corbin, a black man, was accused of killing his employer, a white woman, at her home. He denied the accusation and said the victim’s daughter had blamed him to cover up her own guilt in the crime. Corbin tried to flee, but was shot, wounded and then taken to jail. A white mob dragged him from his cell, hung him from a tree and shot him 400 times, according to EJI. 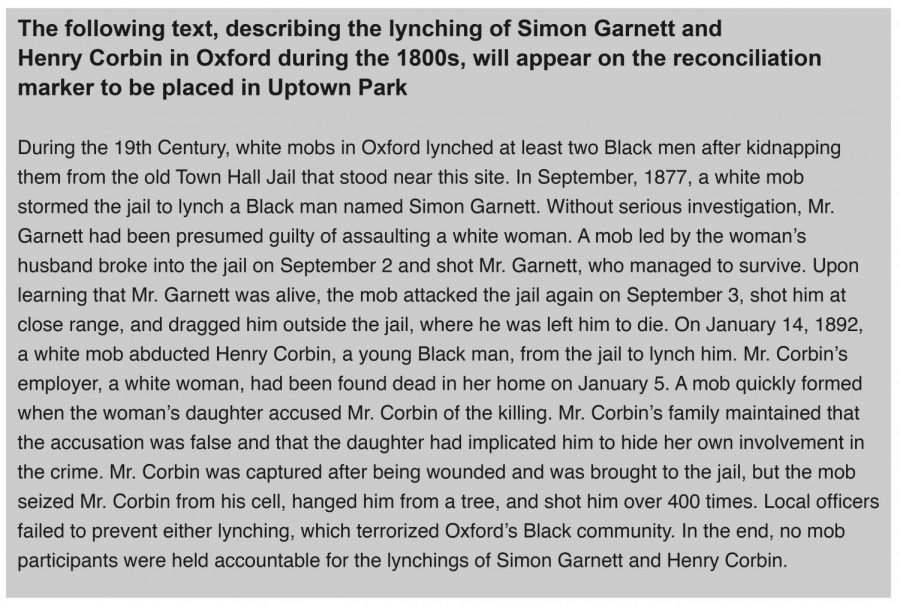 Local police did little to protect both Garnett and Corbin man, and no charges were filed against anyone involved in the killings.

The Historic & Architectural Preservation Commission reviewed the text for the marker and sent it to EJI, which approved it and presented it to city council.

To illustrate that racism is not just a subject of history, Dana Miller, vice chair of the Historic & Architectural Preservation Commission, spoke at the March 17 meeting. They shared the story of racism he, a white man, and his wife, a Black woman, faced when they first moved to Oxford in 2012.

“On my second night here in Oxford, we were walking along Locust and West High, holding hands and a truck drives by with Indiana plates and the n-word flies out of the truck into the hot, humid, cicada-buzzing night,” said Miller. “I was 47 years old, had never lived outside of the western United States, and I realized I had stepped into our history … as a white person. I had the luxury of never experiencing hate until that point.”

Markers such as the one being erected in Uptown Park, help educate today’s community, as well as to mark a point of history, he said.

“We have never had a national truth and reconciliation effort in the United States, and the work of EJI is a start,” Miller said.

Miller said Civil Rights tourism has become increasingly popular, where the sites of well-known protests in cities such as Selma, Birmingham  and Atlanta often are conspicuously marked. “(But) there appears to be a unique resistance in the North to take on these types of projects with the belief that we’re not like the South, in the North. The city of Oxford can be a model of truth in the North.”

City Council members were unanimous and vocal in their support of the marker.

“I’m thrilled that this is coming before us and I thank everybody who has been involved in making this happen,” said Councilor Edna Southard. “Every country has to reckon with the past and our country has not been doing a very good job at all. It’s high time we do. I think it’s wonderful for Oxford to be involved in this.”

Councilor Chantel Raghu commended the historic commission and EJI “for putting this all together and bringing relevance from the past into something that’s sadly still so relevant today  . . . . I stand in solidarity with what you’re doing here.”

The marker, “just scratches the surface of the events that happened,” said Mayor Mike Smith. “I’m the first person to say, as an Oxford born and raised resident, that it is hard to take that it happened here — and it did — so I am in full support.”

Smith said the exact location for the marker will be determined after a detailed examination of possible sites in the park. It is expected that installation will take place in the next few months.

A spot to the rear of the stage and bandstand is believed to be the closest point to the site of the Corbin lynching, but that location is blocked by the stage and unlikely to be noticed, Smith said. Other proposed spots are near the Civil War cannon and a Martin Luther King Jr. memorial, which would give the new plaque more prominent exposure.

Several members of the public called into the virtual March 17 council meeting to express support for the reconciliation marker.

“I believe it will raise some consciousness about the local history of Oxford, especially of the racial terrorism,” said Fran Jackson, president of the Oxford NAACP. “It is a way to reckon with the past and acknowledge some of the horrors of the past, so they won’t be repeated in the future.”

Jackson said that the proposed marker will only scratch the surface of racial injustice and the resilience of the people who worked so hard to overcome that injustice.

“I’d like to highlight the beauty of what we have done. Through a lot of hardships and turmoil, we have been very resilient in our fight throughout the years for equality … I’d like to enjoy the history and I’d like to see some of the joy of black resilience come out,” Jackson said. “Where will we go other than just this marker in terms of reckoning and trying to improve situations so this starts more courageous conversations about race in Oxford’s community in a positive way?”

Oxford resident, Amy Shaiman, called in to say the marker addresses an “incredibly important need to acknowledge this difficult, problematic and traumatic piece of our history in Oxford. When we don’t acknowledge our history, we have seen over and over again that we are all the more likely to repeat it.”

Anthony James, interim vice president for institutional diversity,  called in to say all members of the community, not just the civic leaders, need to reconcile with the evils of racism that have gone before.

“That’s a part of not just saying we acknowledged this happened, but how do we make sure we move forward in a way that people feel physically and psychologically safe in our communities,” James said.