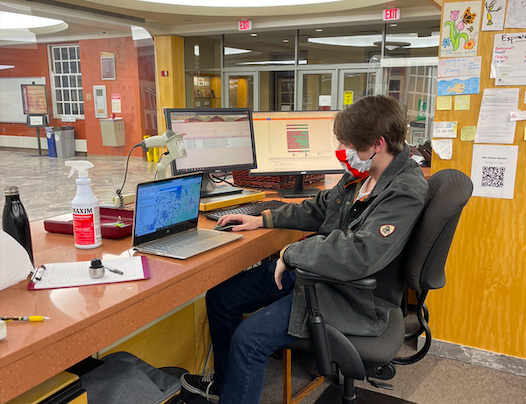 Miami sophomore Ethan Burke puts in 14 hours per week, at minimum wage, staffing the circulation desk at Miami’s King Library. He doesn’t need the wage to live on. It just provides him with pocket money.

A few minutes before 9 p.m. each Thursday evening, Ethan Burke rides his skateboard down the long stretch of pavement that leads to the front doors of King Library.

With his backpack straps pulling on his shoulders, he picks his board up off the ground and strides inside, leaving no time to spare.

Clocked in and ready to begin his first shift of the week, he takes a seat — the middle is his favorite — behind the front circulation desk in the library.

Like many university employed students, he makes Ohio’s current minimum wage: $8.80 per hour.

Since his first month as a freshman at Miami University, Burke, now a sophomore, has worked as a student associate at the Oxford campus’ main library. This semester, he’s taken on 14 hours per week with shifts on Tuesdays, Thursdays, Fridays and Saturdays.

He doesn’t have to live on the wage. For him, all it’s just pocket money.

Burke is a native of Annapolis, Maryland, where the minimum wage is $11.75.

With the United States’ ongoing debate about raising the federal minimum wage to $15 per hour, you might think minimum-wage workers would be following the debate closely. This is not the case for Burke.

In fact, until recently, he was unaware of the issue, and didn’t even realize what he was making at the library was the minimum wage in Ohio.

“It honestly doesn’t sound like minimum wage to me,” he said. “For someone in my position, I don’t really think it’s something I need to worry about.”

Prior to this job, he worked as a referee for a local soccer league, but the pay was cash and under the table. King Library has provided him with his first real paycheck, and he had no complaints about the amount of compensation.

“I just like having money to spend … and I guess to save for the future, too,” he said.

At the moment, his parents pay for all of his larger expenses such as tuition and housing, and he didn’t necessarily need a job when he came to college.

Having a little extra pocket change is all he was looking for, although he realizes that without the necessity to work, he is in a much better position than many who are trying to live on minimum wage.

“If (minimum wage) isn’t working for someone who works full time and works their ass off, that’s a problem,” Burke said. “I suppose I’m a bit privileged. I can work and I don’t really need the money. For people who are less privileged, it’s much more important.”

In the future, Burke plans to move off campus which might change his lifestyle and, in turn, his outlook on his finances. But as of right now, he plans to stay at the library for the duration of his college career, regardless of the pay.

He compares his job to a position at a video store or book shop. It’s a relaxed setting that allows him to work on side projects when he’s not helping patrons, and he enjoys the creative freedom of the environment.

While doing homework is allowed and even encouraged for student employees during their shifts, Burke finds other ways to occupy his downtime, including playing trivia games and studying his favorite subject: geography.

Danielle Owens, a supervisor at the circulation desk of King, said Burke is a strong worker and she enjoys their shifts together.

“I feel this maternal connection to him sometimes,” she said. “It’s nice to work with people who have a sense of humor, too.”

Burke said he will continue working at desk for the foreseeable future, and for now minimum wage, at whatever rate, is not a complicating factor.