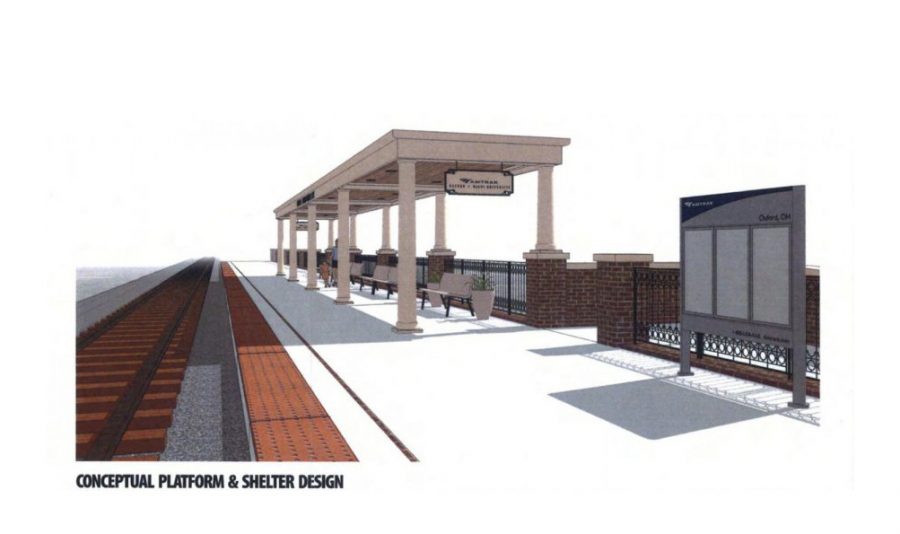 Drawing provided by the City of Oxford

An artist’s rendition from 2019 about what an Amtrak platform on Chestnut Street in Oxford might look like.

Oxford City Council approved a resolution this week supporting Amtrak’s proposed expansion of passenger rail service in Ohio, including a stop in Oxford.

The resolution, calling on Congress to authorize funding necessary to expand Amtrak’s services, was approved at the council’s meeting Tuesday, March 2. The stop is planned to be a multimodal transportation facility with buses, trains and car parking on Chestnut Street.

“City Council and Miami University have pledged funds toward the creation of a platform in that location of $300,000 each,” said Oxford Assistant City Manager Jessica Greene.

So far, the money is just pledged. The $300,000 from Oxford would come from the city’s general fund. Greene said the city has every intention of applying for grants, but almost every federal grant requires a local match, she noted.

Oxford and Miami have been working with Amtrak to get this stop for at least five years.

“First you have to get Amtrak interested in a stop in your community, which they are interested in, and then you have to plan to build either a station or a platform,” said Councillor David Prytherch.

He described the process as, “a slow train with a lot of stops and starts, and we’ve been a little slow in Oxford to make it happen, but we’re right at a place now where we’re moving forward with station design.”

Station design is a very important step in this process. The proposal is for Oxford to be a stop on Amtrak’s Cardinal Line, which connects Cincinnati with Indianapolis and Chicago. The track already runs through Oxford.

“Amtrak is not going to make a commitment to stop until we’re ready to build a platform …We need to show Amtrak that we are serious by moving forward with the platform design,” said Prytherch.

An artist’s rendering of a proposed station was done two years ago. The station would be adjacent to a proposed bus station operated by the Butler Area Rapid Transit Authority (BARTA), but fully designed plans have not yet been done.

“We’ll be doing the design in 2021 and my hope is that we can optimistically begin the construction this year or next,” said Prytherch.

Prytherch pointed out that Oxford is at a breaking point with this stop approval, because other communities are also enthusiastic about having access to this type of transportation.

The council’s resolution Tuesday is meant to demonstrate the city’s support for Amtrak, said Greene.

“Amtrak has a lot of ambitious growth goals that would really be an increase in passenger rail in the United States, but especially in this Midwest corridor,” said Greene. “We think Amtrak’s ambitious goals and growths are a good idea, beyond just our little platform.”

Prytherch emphasized how important it is for the city to reach out to its representatives in Washington to stand up for the community as Amtrak is a federally owned rail corporation.

“We’re asking our senators and representative (Warren) Davidson to help fight for a stop in Oxford and help fight for the funding necessary to make Amtrak what it can be,” said Prytherch.

Both Prytherch and Greene believe that the future of the Midwest will involve high speed rail and are enthusiastic about Oxford’s opportunity to be on one of the major corridors of the Midwest.

“It’s a once-in-a-generation opportunity for Oxford and it will take a team effort between Oxford and Miami,” said Prytherch. “Honestly, any person that wants Amtrak to be in Oxford should contact their representatives too because this is a make or break moment for our community.”

Davidson and Senators Sherrod Brown and Rob Portman can be reached online at the Web addresses linked below: