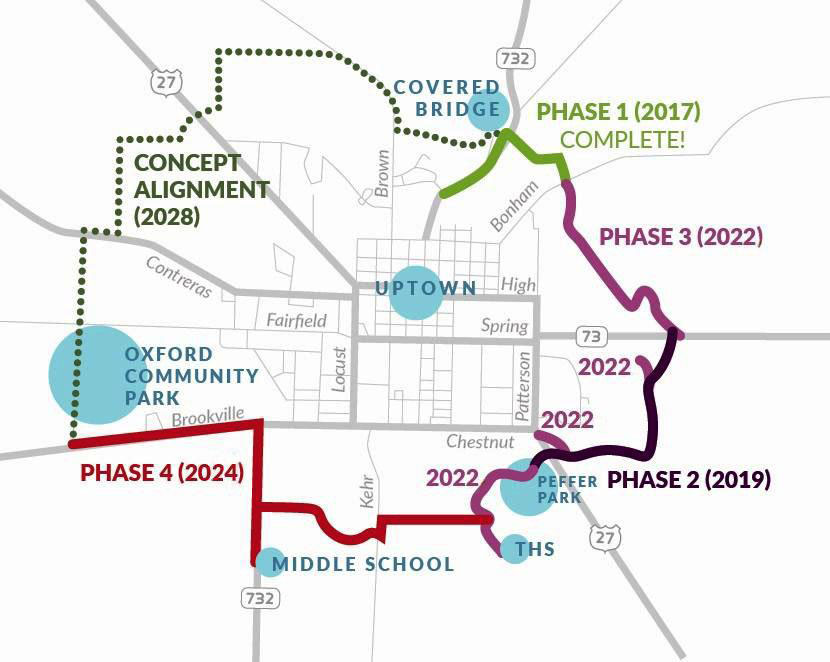 Map provided by the City of Oxford

This map shows the completed Phases One and Two of the OATS system, as well as Phases Three and Four, projected to be completed in 2022. The entire project is expected to be finished by 2028.

Oxford is seeking a $500,000 grant from the Ohio Department of Natural Resources to help complete the next two phases of the Oxford Area Trail System (OATS).

“In 2022, we will construct both phases three and four for the Oxford Area Trail, which is exciting, and the cost for construction will be just over $4.2 million,” said Greene.

OATS is a network of hiking and biking trails that eventually will encircle the city, with several side branches. The trails were in the works for more than 30 years after a group of Oxford residents collaborated to plan where the pathways should be, but that blueprint was just an idealistic dream until phase one was completed in 2017 by a second generation of residents, according to the project’s website.

The city’s goal is to build all 12 miles of the trail around Oxford by 2028. Phases One and Two have already been completed, with Phase One finished in 2017 and Phase Two in the summer of 2020. The city is in the design and engineering stage of Phases Three and Four, with their projected completion in 2022. Phase One runs from the Black Covered Bridge east to Bonham Road. Phase Two runs from OH 73 around Miami’s Western Campus to US 27 at Peffer Park. Phase Three will run from Bonham Road to OH 73 and Phase Four will run west from Peffer Park to Oxford Community Park.

It is an expensive community project to complete, but that is why the city is applying for aid from outside sources.

“We have just over $1.9 million in existing grants, but with engineering, design and the construction match, that still leaves us with $3 million coming from our levy,” Greene said. “My goal with this (ODNR) grant is to offset our local match and to, hopefully, stretch our levy just a little further,” she said.

The city passed a property tax levy in 2018 to help fund the project. The levy costs property owners 0.325 cents for each $100 of assessed value.

“I think that when we sold people on the levy it was under the assumption that there would be a return on their investment through grant dollars,” said Councilman David Prytherch. “We’ve gone for all of the big grants, but the more grant dollars we can have relative to our local match, the better, so I really appreciate trying to stretch this out so that we can get the most trail out of the levy possible.”

Oxford resident Amy Shamen called into Tuesday’s virtual council meeting to say how much she appreciates all that Greene and the City Council have done to get the trails ready and get the community into nature.

“It is so important that they are being made accessible and available to the community. Thank you,” she said.