A quarantine hobby turns to a business for Miami junior 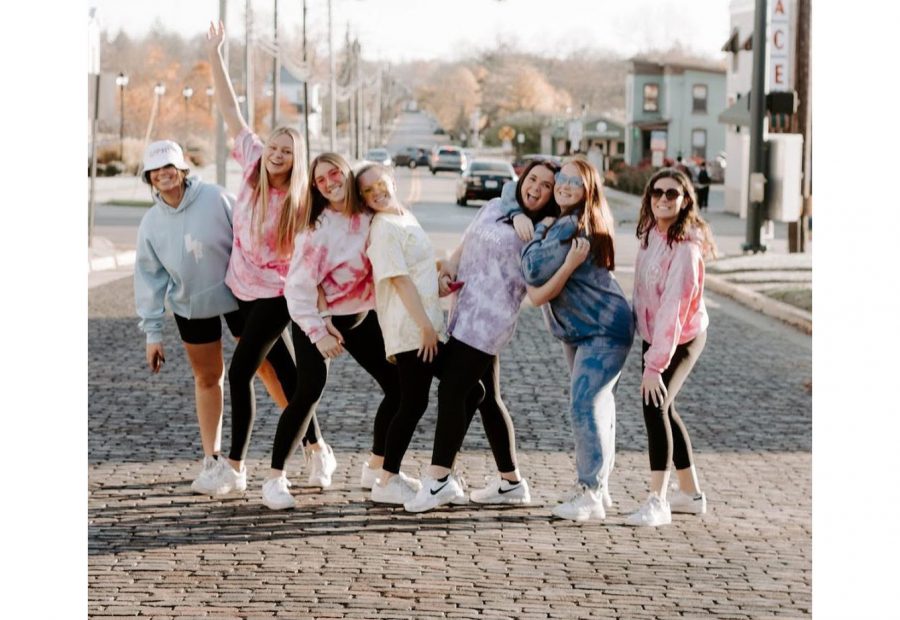 A group of Annika’s sorority friends model for the photo shoot prior to Apparel by Anni’s relaunch in November.

According to Newell, then a sophomore special education major, she was upset after she was sent home to Chicago from Miami University, after just joining Gamma Phi Beta. Since she was not able to get any sorority apparel, she took it upon herself to experiment.

“After I printed my first design, I was like wait this is kind of cute, so I put it on my story and told people to slide up if they wanted one,” said Newell. “Like 10 people slid up and said they wanted one and it kind of took off from there.”

Newell took her least favorite bleached, dyed sweatshirt and attempted to use transfer paper to print ‘GPHI’ and a lightning bolt across the front. After receiving positive feedback and overwhelming orders, she decided to launch her company at the start of June.

Newell’s mom, Kristina Newell, said boxes of blank sweatshirts would arrive on their doorstep every day because her daughter purchased materials as people ordered their custom pieces. As the business flourished she began ordering her blank products off bulk websites.

“She pretty much runs the show by herself. We didn’t give her any startup money for it, so I appreciate that,” said Kristina Newell. “She really has been all on her own and I am so proud of her.”

According to Newell, she started off making sweatshirts and T-shirts for her friends and family until she turned her passion into a company. She created an Instagram account @apparel.by.anni and an Etsy account to publish her products.

“I had my Etsy for a few months and I just published any custom orders I had made. I realized if I actually wanted to make money then I had to do something to make my company stand out,” she said.

In an attempt to make a whole new face for her brand, Newell created new designs and more products to relaunch Apparel By Anni. Newell knew exactly who to recruit as her photographer for the shoot.

On Nov. 8, she teamed up with sophomore Interactive Media Studies major, Amanda Schweder to hold a photoshoot for her relaunch in her backyard in Oxford. According to Schweder, she and Newell talked about their visions for the shoot and decided on an outdoor setting with a white sheet in the background.

“This was my first product shoot and I have never had that many models in one setting before, so it was interesting to try and do that,” said Schweder. “I feel like it went very well since it was my first time doing a shoot like that.”

According to Newell, the relaunch was even more fun than expected and she invited her friends from all different sororities to model her new products.

“It was a really big compliment that she asked me to help,” said Schweder. “She is a great person to work with in life and in business because she is very supportive to the point but also like she just gets it.”

Business keeps up with growing demand

After the photoshoot, Newell slowly posted teasers on her Instagram to countdown to her relaunch on her Etsy account. Nov. 15 was the official relaunch day of Apparel By Anni.

“On the day of the relaunch, I got a ridiculous amount of views but just on that day I got 20 physical orders; some had multiple items,” said Annika. “It actually feels real when I look through where the orders are from and don’t recognize people’s names.”

Taking on her first mass order

One of Newell’s close friends from home had her make matching shirts for her sorority’s big/little reveal earlier this year. When she heard about the relaunch, she reached out to Annika with a big request.

“She told me how she was upset because Theta wasn’t doing any apparel orders this year because of Panhellenic restrictions and she asked me if I would be interested in doing a custom order for Theta at Wisconsin,” said Newell.

She said yes to the request and created three custom items that they could all choose from and left the site open for a week for people to purchase them. Newell said she is very excited to have her first massive order even though she is the only one making her products.

“It is the same design, same colors and stuff, so, hopefully, I can just crank them all out,” she said.