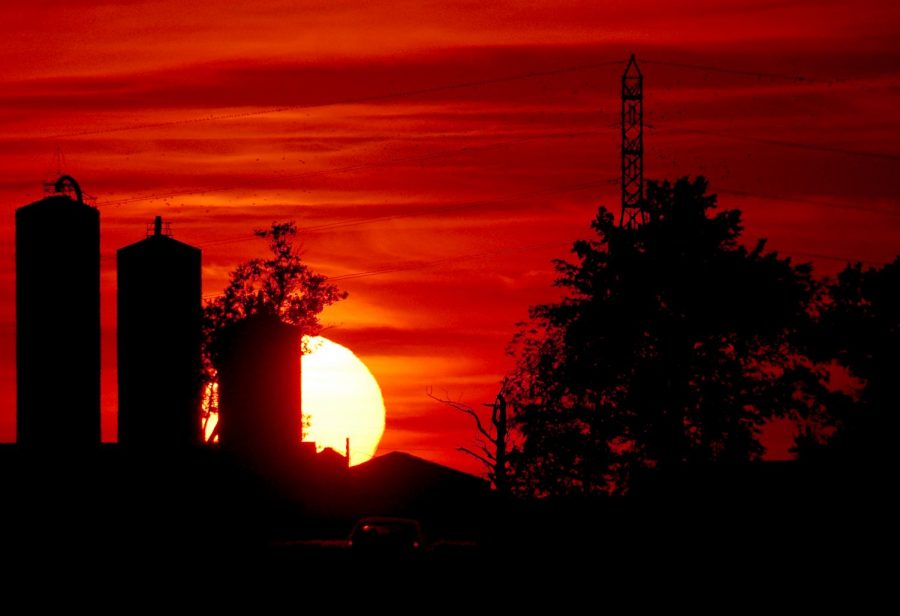 This sunset is from a farm just west of Oxford, across the border in Indiana.

To many, Oxford is a small town overrun by thousands of college students who populate uptown and fill the bars. But, John Kinne and Norm Krumpe are looking at the community differently – through the lenses of their cameras.

The two don’t know each other, but they share a common interest in finding beauty in the community around them. They share their views of Oxford’s buildings, fields, farms, natural beauty and sometimes even its people with the rest of us by posting their work on social media.

Kinne’s childhood was captured by his grandmother, who loved taking photos with her Kodak box camera. Little did Kinne know, he would inherit his grandmother’s passion for telling a story through photography.

“I’ve been interested in photography since before my hippocampus was formed,” said Kinne.

When his grandmother passed down her box of photographs, Kinne knew he too wanted to adopt the hobby.

“I started taking pictures before I could even afford to have the film developed, and I’ve been taking them ever since,” he said. “When I take a picture now, I think about, ‘What story do I want this picture to tell?’”

Living on a 53-acre tree farm just west of Oxford, Kinne said he is “really blessed” to be surrounded by beautiful nature and wildlife, as well as plenty of work to keep him busy during the pandemic. Having worked in the Miami University IT department from the early 1970’s until 2009, Kinne has been a proud Oxford-area resident since 1971.

His love for photography has taken him places much farther than the confines of his farm though, leading him and his wife to national parks like Grand Teton, Yellowstone and Glacier. Some of his favorite shots are of mountains, like the ones at Grand Teton National Park in Wyoming.

“I feel like you can point the camera in almost any direction (in the Grand Tetons), and with a little bit of effort, you can get a nice shot,” he said.

“(I like to photograph) birds and trees and mountains and hills and skies,” Kinne said. “They don’t get upset when you try to take their picture. They don’t turn their back on you, they don’t look for a way to run away.”

In 2020, Kinne took on a “very long experiment” with his photography. Often, he focuses on the things that he said are interesting already. To challenge himself, Kinne wanted to create something interesting, rather than just capturing it.

Kinne’s inspiration for his project is abstract art. He said every once in a while he will see abstract work that awes him because of the message hidden “in the composition, the balance of light and the juxtaposition of colors.”

To recreate this, Kinne gets to use some of his technical and computer skills to edit the photos he captures.

So much has changed in photography since Kinne’s grandmother gifted him a camera years ago. He went from not having money to develop the film he was taking photos with, to having his own darkroom, to now having semi-professional lenses and editing software.

Seeing these advancements and being able to experience them has made Kinne grateful for some of the memories not only captured by his photos, but captured while taking, developing and editing them.

“I like building memories,” said Kinne. “It turns out that I can look at pictures that I took decades ago and the memories are still there because I spent so much time thinking about it while I was working with it.”

Krumpe also got hooked on photography thanks in part to his grandmother, who gifted him a camera, with the help of his uncle, more than 40 years ago.

For Krumpe, the most beautiful object to see on the other side of the lens is a sunset. In high school, he began shooting beach sunsets in Erie, Pennsylvania. Now, when the weather is right, he hops in his car to track down the hues of red, purple and orange.

“Sometimes I will chase sunsets, getting in my car and driving until I get a good view,” Krumpe said. “I don’t know anyone else who wants to be a sunset chaser!”

Krumpe’s work is mostly found on his Instagram, @krumpe. But, he has also been showcased in exhibits at the Oxford Community Arts Center and Middletown Arts Center, as well as the Oxford Visual Arts Connection and Oxford Talk Facebook groups.

In recent years, Krumpe has used his talent for charity, contributing to a project aimed to raise money for children’s art programs.

“A few years ago, (the Oxford Visual Arts Connection) started an annual calendar of works by local artists, with proceeds benefiting art programs for kids,” said Krumpe. “I have been a part of that from the start, and have had my photos in two of the calendars from the past four years. This year, I had the job of creating our calendar.”

Last summer, Krumpe and his wife planned to drive the coast of California, chasing sunsets and other opportune photography moments. After canceling the trip due to the pandemic, they hope to hit the road sometime in 2021.

There might be more on the horizon than trips to the coast and sunsets worth photographing, though. Krumpe said someday his work might be up for sale.

“Someday I might consider really trying to sell some of my photos,” said Krumpe. “People have told me they’d love to get a calendar of my photos of Oxford. So, maybe someday!”

Through the many changes Oxford and the world have endured in the past year from the pandemic, Krumpe and Kinne have been able to keep photography as a constant in their lives.

Even if they can’t travel to the coast or the mountains to shoot pictures, seeing and sharing Oxford through a lens is doing the trick for now.