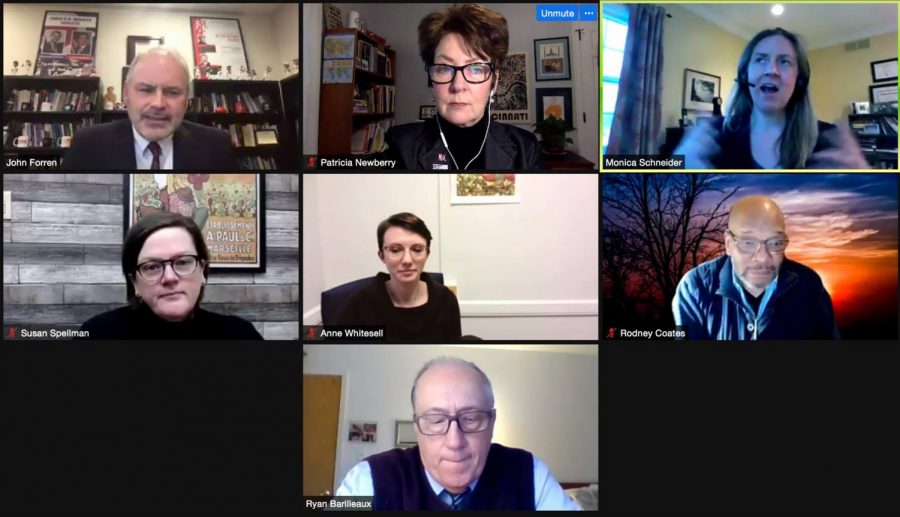 The media has a major role to play in moderating political polarization and amplifying the message of unity among Americans, according to a virtual Town Hall meeting, featuring a panel of Miami University experts, held Wednesday night.

“The president (Joe Biden) on Inauguration Day used the words ‘unity, unity, unity,’ and I think the media’s role is to help amplify that message of unity,” said Patricia Gallagher Newberry, a senior lecturer and coordinator of Miami’s journalism program in the Department of Media, Journalism & Film

Newberry was part of a panel of experts in political science, history, sociology and journalism who discussed the 2020 presidential election, post-election social unrest and the implications of recent events for the future under the theme, “Democracy Under Pressure: A Town Hall Discussion of Recent Events.”

To further amplify the message of unity, she proposed that leaders of the world should hold the media accountable and call on them to stop fomenting polarization.

“Fox, CNBC and CNN, let us find the middle road, let us rededicate ourselves to balance.”

Picking up from Newberry’s proposition, Rodney Coates, professor of global and intercultural studies/critical race and ethnic studies, said polarization is not only part of national politics, but is also at the neighborhood level.

“This isn’t a political issue but a fraying of community bonds,” Coates said. “It affects our ability to identify, define and solve problems. The traditional way of solving these things is that we need more civic engagement.”

Professor Monica Schneider of political science said it is important for students to learn how to look for evidence to back up claims and to determine what a good source is and what isn’t, or what claim is true and what isn’t.

“During those teachings, we will be able to help do our part in contributing to less misinformation,” she said.

Coates again called for all sides in politics and society to challenge each other on facts and evidence.

Ryan Barilleaux, also a professor of political science, said there are many Americans without a historical perspective.

“We need to know more about our history but you want to increase social cohesion … you need to get your noses off your phones. There is way too much focus on social media, people who only live on social media, they only talk to people who agree with them,” he said.

Barilleaux said many young people huddle together but don’t talk to each other because they are on social media. He said he believes social media has outbalanced and damaged the political system and something needs to be done about it.

Coates proposed that the best way to help young social media users is to use the same platforms to encourage them to do critical thinking.

After the initial presentations, the group took questions from the virtual audience.

After a question about bias in media coverage of events,  Newberry agreed.  “Too much bias has seeped into coverage,” she said.

David Hirsch, a member of the audience, noted that most print news media are under enormous financial pressure and are losing subscribers, and that the shrinking pool of reporters must have an effect on the ability of the press to be the “watchdog.”

Newberry responded that local news coverage is in “terrible, terrible shape,” because of cutbacks and the loss of many local news outlets.

“It is the leading crisis of the industry, with few workable solutions,” she said.

Audience member Dana Miller wanted to know: “Why are lies so seductive?”

Coates answered that it is because they require no thought or effort.

“(Their lies) appeal to our egos and hearts, while truth often is fraught with issues that require us to act on such truths,” he said.

Evan Lichtenstein, assistant vice president of development at Miami University, noted that with the loss of local journalism, there is a hole in political coverage that is being filled by the likes of Facebook, Twitter and other online outlets that do not have the same sense of commitment to journalistic ethics that newspapers do and asked if that leads to the polarization of the electorate.

Another student, Delaney Towers, asked if with a more moderate president there is any hope of returning to a political landscape where compromise is no longer such a dirty word, or “are we simply too far gone?”

“I think there has to be more than just a president to solve polarization,” Schneider answered.

She said getting over polarization requires all Americans working at correcting faulty perceptions and altering social media to have more dialogue with opposing parties.

The event was sponsored by the Office of the President at Miami, the Menard Family Center for Democracy and ASPIRE, Miami’s office of Advancing Strategy, Partnerships, Institutional Relations and Economy. The event was moderated by John P. Forren, executive director of the Menard Center at Miami.