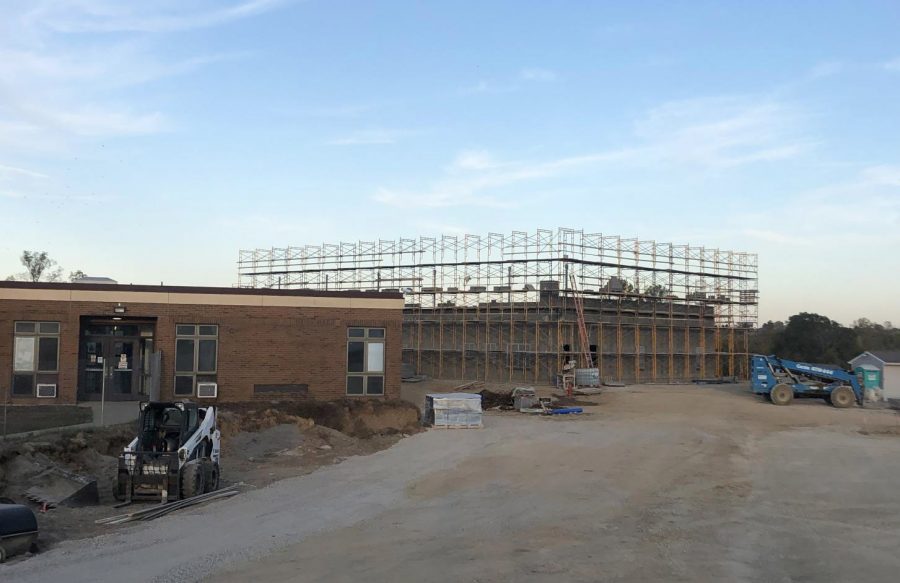 Construction delays mean the Talawanda Board of Education must decide what to do with students of Marshall Elementary School, during asbestos abatement and demolition at the old building.

Chris Otto and Mary Jane Roberts were reappointed president and vice president during the first Talawanda school board meeting of the year Monday, Jan. 11. Otto and Roberts were selected by other members of the board, which is facing fiscal challenges, construction delays while operating in a pandemic.

Due to a 10 percent reduction in state aid and a $344,000 loss in revenue brought in by the school district income tax, the school board is grappling with some fiscal concerns. The district is about halfway through the 2021 fiscal year, which runs from July 1, 2020 to June 30, 2021.

“The collections were down due to COVID and community members losing their jobs or having a reduction in hours,” said district treasurer Shaunna Tafelski. “Less people working equals lower income taxes being collected.”

Currently, there is a 125 percent increase over the original budget for the fiscal year, according to Tafelski.

The school board declared that the district was in financial distress on June 9, 2020. There are three different types of fiscal distress: fiscal caution, fiscal watch and fiscal emergency. The district currently meets the criteria for fiscal watch.

According to the Ohio Department of Education (ODE)/Auditor of State (AOS) Ohio Revised Code (ORC) section 3316.031- fiscal distress overview, “The Auditor of State shall declare fiscal watch when the operating deficit exceeds 8 percent of the general fund revenue in the preceding year(s) and the voters have not approved a levy to raise enough money in the next fiscal year to eliminate the deficit.”

But, according to Tafelski, the cash balance cash flow, or reserves, is also a consideration when looking at what level of fiscal distress the district is in.

If the district was to reach fiscal emergency, meaning “operating deficit(s) exceed 15 percent of the school district’s general fund revenues for the preceding fiscal year(s)” and “the district will have depleted all of its reserves by (fiscal year 2025) based on current projected operating trends,” then the state would take over, which is equivalent to Chapter 11 bankruptcy.

To address these financial concerns, the board attended a fiscal workshop Thursday, Jan. 15. At the workshop, the board will review the state auditor’s performance audit that was completed last spring, said Tafelski.

“(The board) reviewed (the performance audit) this past June, but it is time for some decisions to be made to alleviate some of the pressure on our bottom line,” said Tafelski.

One of the first steps the board made at Monday’s meeting was to decrease its own service fund, used to pay for the board’s professional development, travel and training expenses. Typically, $20,000, the board voted Monday to cut it to $8,000.

Roberts said she hoped the decision will set an example for some necessary budgetary cuts or changes to come.

“I think we need to be the role models to show that (cutting costs) is what we’re planning to do where we can,” said Roberts.

The construction of the new Maude Marshall Elementary School has faced multiple challenges and delays over the course of planning and building the new facility, which is going up right next to the existing school on US 27. The school has approximately 385 students in kindergarten through fifth grade.

Because of asbestos and health concerns, the students cannot be on the site while the old school is torn down, according to Superintendent Ed Theroux.

“The Marshall Elementary Construction Project is behind schedule due to the water easement, poor soil mitigation, poor weather conditions and wet soil. The construction team has worked to get the schedule back on time without paying additional money such as overtime,” according to a report made to the board on Monday.

It had been hoped the teardown and asbestos abatement could be done over the summer, but the delays have interfered with that schedule. Theroux told the board members they will need to decide on one of three options as construction wraps up in the coming months:

Spend $250,000, out of the general fund, to pay the construction team overtime and get the project back on track. However, this option is no guarantee against any further delays, and the board already has fiscal concerns.

Delay Marshall’s fall start date until the building is ready. This would mean either starting school around Oct. 4, 2021, or holding remote school until Oct. 4, when in-person learning could resume.

Move Marshall Elementary to remote learning for the final 18 school days of the 2020-2021 school year. This would begin May 3, pending no other issues or delays and would allow the construction and demolition to move faster.

Theroux said the school board will need to make a decision at the next board meeting Feb. 8. He acknowledged that the board has a tough decision to make, but that the situation is not a result of poor planning or the construction team not doing the work.

“We’re at a point where we’re going to have to make a tough decision one way or the other,” Theroux said.

Continuing to teach and learn during the COVID-19 pandemic

Theroux noted that some Ohio school districts are supposed to begin receiving their first doses of the COVID vaccine as soon as Jan. 15, although Talawanda’s won’t come until sometime after that. Doses of the vaccine are for any faculty and staff members who want it, according to Ohio Gov. Mike DeWine’s Jan. 5 press conference.

When and how many vaccine doses a school district gets is dependent on the area and county the district is in. According to Theroux, Butler County has yet to complete phase 1A of the statewide vaccination program. Teachers and school staff are not set to be vaccinated until phase 1B, which means Talawanda may have to wait for its supply.

Despite not having the vaccines yet, the district has started preparing for when they will arrive.

All staff members who wish to get vaccinated have been identified and placed in a prioritized list. Additionally, Theroux warned parents and families that a calamity day or remote learning day may have to occur on short notice for vaccines to be administered.

As it was the board’s first meeting of 2021, it assigned one member of the board to serve as special liaison to each of the district’s five schools. Those assignments are:

Meade also will serve as the board’s representative to Butler Tech.