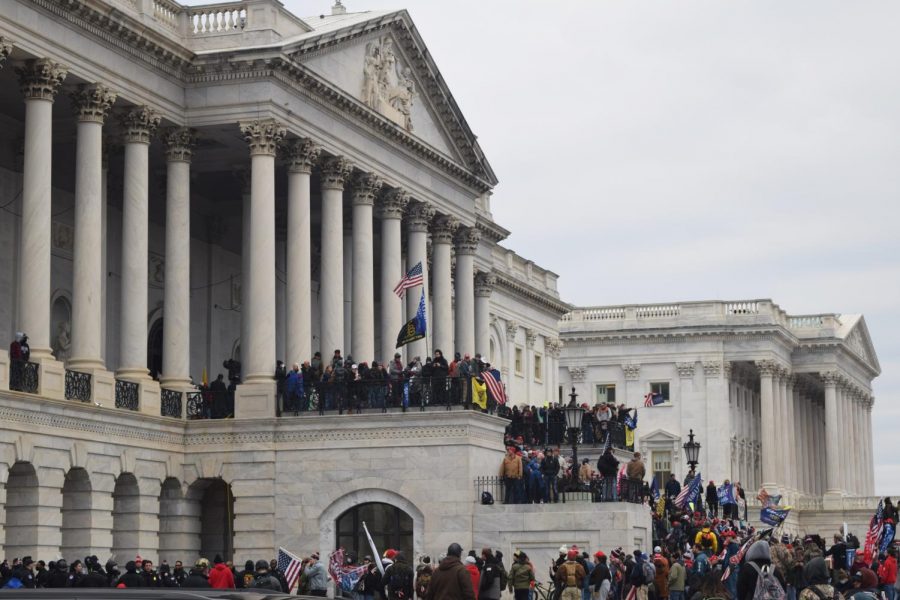 Photo by Zach Schonfeld of the GW Hatchet

A mob of Trump supporters storm the Capitol Wednesday to protest the election results.

Wednesday’s ransacking of the U.S. Capitol Building by a mob of pro-Trump supporters, led to believe they could somehow overturn the results of the election, left the country stunned and most public officials responding with furious denunciations of the actions and those believed to have encouraged the rioters.

Ohio’s two senators and the congressmen from this part of the state had strong words about what happened.

“Yesterday (Jan. 6) was a dark day for our country. Domestic terrorists attacked our seat of government, at the behest of the President of the United States. This was his last, desperate attempt to overturn the will of the American voters, but he failed, and democracy won,” Brown said in a statement released Thursday. “We must hold the president accountable for inciting this attack on our country. The cabinet and vice president should immediately invoke the 25th Amendment to remove him from office, to prevent him from doing more damage between now and Inauguration Day. And in 13 days, Joe Biden and Kamala Harris will take their oaths of office and begin the work to bring out the best in our nation rather than the worst, supported by a Democratic Senate.”

“I condemn the violent and criminal acts that took place at the U.S. Capitol today,” the senator said Wednesday night via Twitter, @senrobportman. “These shameful actions to disrupt a session of Congress and vandalize the Capitol building should never happen in our great republic.”

“It’s time for President Trump to embrace the peaceful transfer of power, which is mandated under the Constitution & a hallmark of our democracy. The Senate should reconvene to get our work done. I urge the House & Senate to certify the electoral college results tonight.”

But many constituents responded to Portman’s statement with comments of their own, condemning the senator for supporting Trump for so long. For example, this response from @rawilson59:

“We warned you that silence was complicity. You are/were complicit @senrobportman. You can claim otherwise after the fact. But your silence in the face of Donald Trump’s actions and your “not guilty” in his impeachment and your support for his re-election cannot be washed away.”

“There is no excuse for rioters’ actions yesterday, and their actions are rightly condemned. The Constitution protects peaceful protest, not riots or rioters,” Davidson said in a press release Thursday morning.

Davidson was among the Republican members of congress who voted to object to the Electoral College ballots submitted from Arizona and Pennsylvania on Wednesday, actions which drew protesters to Washington at the urging of President Trump.

“I objected to electors from Arizona and Pennsylvania, where numerous systemic issues threatened to undermine the equal protection principle of ‘one person, one vote.’ No debate was permitted on other states, so they were accepted without debate or recorded vote,” he said in the press release.

The Butler County Democratic Party called on Rep. Davidson to resign over his support of Trump

“Even in times when the world was at war or during America’s civil war, the joint session of Congress counting the legally cast ballots of the duly appointed and elected electors of the electoral college has never struggled to completion.  Until today.  And for no other reason than because public officials like Congressman Warren Davidson abused their public offices to lend validation to a baseless conspiracy theory attempting to explain away losing a fair, transparent, and thoroughly examined election.  The last two months, officials like Davidson have allowed Trump to slander election officials and vendors nationwide with completely unfounded conspiracy theories despite them being debunked over and over again,” said the statement.

“Congressman Davidson knew these electoral challenges were in bad faith.  He even tried to excuse making them by claiming there was no real harm as he knew they would ultimately fail.  You can’t spend two months letting Trump and conservative media delude masses of militia types convincing them that Trump didn’t actually lose but falsely claim an election was stolen and telling them they need to take action to stop it and not see that these groups would respond violently.  By validating this mass delusion of known right wing agitators, it was foreseeable that Davidson’s actions would be a green light to today’s occupation and vandalism of Congress.  He has put his colleagues and staffers at an unnecessary risk and left a dark stain on our history today.”

“What is occurring right now at the Capitol is completely unacceptable. In America, we have the right to peacefully assemble and protest,” Chabot said Wednesday via Twitter, @RepSteveChabot.

“But, we do not, under any circumstances, have the right to violently storm government buildings and threaten the safety of our police officers and our fellow citizens.”

Chabot also was among those voting to object to the Electoral counts from Arizona and Pennsylvania.

“I am appalled at what is occurring in the US Capitol right now. President Trump needs to call for an end to this violence and permit Congress to facilitate a peaceful transition of power,” he tweeted Wednesday @RepMikeTurner. Turner, who did not object to the counts as Chabot and Davidson had, also received pushback from some people on Twitter:

@CaptainAbsolut3 disagreed with Turner, saying Trump was not to blame:
“Maybe you should realize how upset people are, Mike. I don’t condone violence, but people are fed up with the double standard and our complete breakdown of law and order. I 100% blame the media. They have okayed this behavior all summer and ignore real election fraud allegations!”

John Boehner, Republican, the former Speaker of the House and former representative from the 8th District

“I once said the party of Lincoln and Reagan is off taking a nap,” Boehner said Thursday on @SpeakerBoehner. The nap has become a nightmare for our nation. The GOP must awaken. The invasion of our Capitol by a mob, incited by lies from some entrusted with power, is a disgrace to all who sacrificed to build our Republic.”

At his regular Thursday afternoon press conference to discuss the state’s fight against COVID-19, Ohio Gov. Mike DeWine opened with a strong denunciation of the rioters.

“What was going on in the Capitol yesterday, when the mob did that, makes it a direct attack on the Constitution– on everything that we hold dear,” said DeWine.

The Governor, a Republican, blamed President Trump for encouraging the protestors and inciting the violence.

As a former U.S. Senator himself, DeWine praised Vice President Mike Pence, senators and House members for returning to the Capitol and carrying out the will of the people, despite what had occurred earlier in the day. He described Congress’ return to the Capitol as a “sign of great strength, unity and hope.”

When asked what he thought about suggestions that the cabinet and vice president should invoke the 25th amendment and remove Trump from office, DeWine noted there are less than two weeks left in the president’s term.

“For the good of the country, that seems to me to be something that would cause more division than healing,” he said. “We should be at a time now for healing.”

Also speaking at the Governor’s Thursday press conference, Husted, a Republican and former Ohio Secretary of State in charge of Ohio elections, told listeners to “make no mistake, the election was fair,” and Joe Biden and Kamala Harris were the legitimate winners.

“These are crazy times. We have no leadership in either party,” Jones said on @butlersheriff.

“Why did Capitol police let this happen? They knew this was a possibility. Someone needs 2 b fired.”

David DeVillers, U.S. Attorney for the Southern District of Ohio