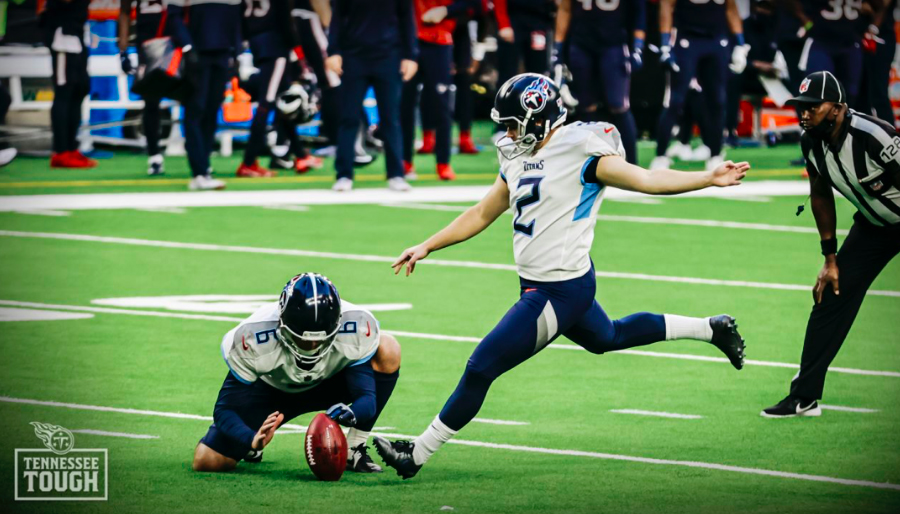 Rookie kicker Sam Sloman hits the final kick of the game as time expires, leading the Titans to a 41-38 victory over Houston.

In a National Football League (NFL) season marked with unexpected twists and pandemic restrictions, week 17 was no exception, with three former Miami RedHawks adding to the excitement.

Rookie kicker Sam Sloman became a hero in the Tennessee Titans’ final regular season game, narrowly making the game-winning field goal from 37 yards out on Sunday, Jan. 3, leading the Titans to a 41-38 victory over the Houston Texans, as well as the AFC South title.

The kick hit off the right upright as time expired and bounced through the posts, winning them the game. It gives them the home field advantage for the 11-5 Titans in the upcoming first round of the playoffs this Sunday against the Baltimore Ravens.

“I knew it was good off the foot, I didn’t think it was going to be too close immediately and then I saw the ball,” Sloman said in a post-game press conference. “It was a little bit nerve-wracking, but I knew it was still going to be good so I was pretty excited.”

Sloman said the kick was the first last-second field goal he’s ever attempted.

The kicker was 2-for-2 on the day after connecting on a 47 yard attempt that put the Titans up 3-0 in the first quarter. He also went 5-for-5 on point-after attempts.

After being drafted in the seventh round by the Los Angeles Rams, Sloman was cut earlier this season, eventually being signed by the Titans as a member of the practice squad in late November.

Across the league, defensive tackle Doug Costin, who also graduated from Miami last year, had a strong finish to his rookie season with the Jacksonville Jaguars, ending the year with a combined 32 tackles in 12 games, including three for loss. Costin also successfully defended two passes this season and had one fumble recovery in the Jaguar’s Week 14 loss to Tennessee.

The 1-15 Jaguars failed to make the postseason, but Costin is expected to spend at least two more seasons in Jacksonville after signing a three-year deal as an undrafted free agent last spring.

Costin failed to make the 2021 Pro Bowl roster after being nominated alongside fellow former RedHawk Ben Roethlisberger, who also missed out on the final roster. The complete 2021 AFC and NFC Pro Bowl rosters can be found here.

Tight end Nate Becker, who graduated from Miami in 2018, made his regular season professional debut this past weekend as the Buffalo Bills beat the Miami Dolphins 56-26. Becker was signed to the practice squad in 2019, but he was activated this week as starter Reggie Gilliam was out with an injury and Tyler Kroft tested positive for COVID-19.

Becker and the No. 2 seeded Bills will take on the Indianapolis Colts on Saturday, Jan. 9, the first day of the NFL’s Wild Card Weekend.

The full schedule for the first round of the playoffs can be found on cbssports.com.