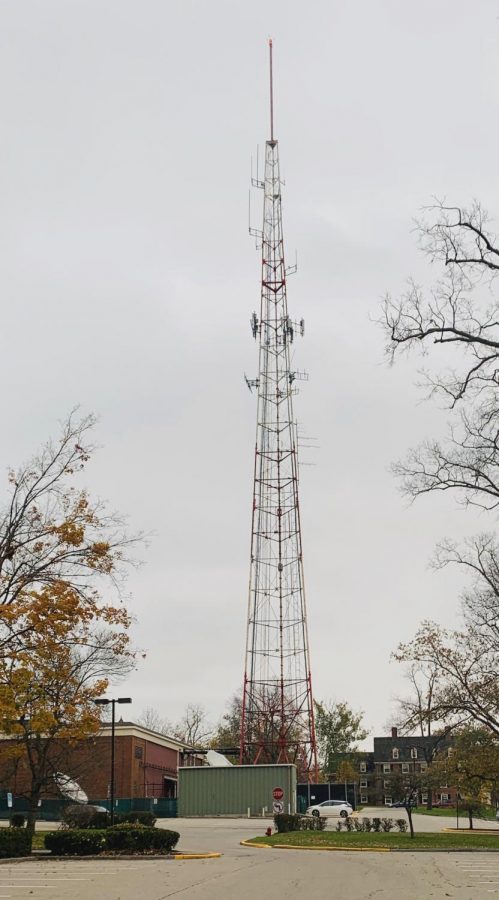 The Williams Hall Transmission Tower, a local landmark for 60 years, was 342 feet high, including the antenna on top. It was the first Miami University structure visitors could spot as they approached the campus from the south.

Editor’s note: Check out the slideshow below.

The Williams Hall Transmission Tower, after being an Oxford landmark for 60 years, has come down.

The tower was located behind Williams Hall on Oak Street, home to the Miami’s Department of Media, Journalism & Film.

Unused for several years, the tower was 288 feet tall, topped by a 54-foot antenna, for a total height of 342 feet. It was disassembled in December while most students were away from campus, and the surrounding parking areas could be closed off without disruption.

Several Oxford residents and former staff who worked with the transmission tower expressed sadness at the tower’s demolition in response to a question posted by the Observer on the Oxford Talk chat site on Facebook.

“I miss the red of white warning lights which I could see from my window,” said Alice Laatsch, an Oxford resident. “(I) also have memories of one grandson at age five figuring out when and why the lights change with day and night.”

Barbara Hutchison Wickham, also of Oxford, shared warm memories of her family’s experience of the tower.

“We moved to Oxford from Lexington in 1972,” said Wickham. “From that time on our sons called it The Oxford Rocket and after every visit with family in the Bluegrass said ‘look, the Oxford Rocket’ and knew they were home.”

Debbie Vogt, an Oxford resident and former WMUB Radio Station employee, was able to give some history behind the transmission tower.

“The tower was TV – WPTO Channel 14. MU sold the TV station sometime in the 70s,” said Vogt. “The tower was used by cell phone companies and OPD for communications. WMUB’s radio tower is out by the Nike base. Having worked at WMUB for 12 years, I was sad to see the tower go along with the memories. An end of an era.”

Many viewed the transmission tower as a landmark. Many used it for directions, to know where they were going and when they had gotten to their destination. Others were not so saddened by the deconstruction of the tower.

“First time at work for a while and I didn’t even notice,” said Miami employee Kay Alexander Russell, in response to a Facebook query. “Since I saw this, yes, it’s gone and I don’t care.”