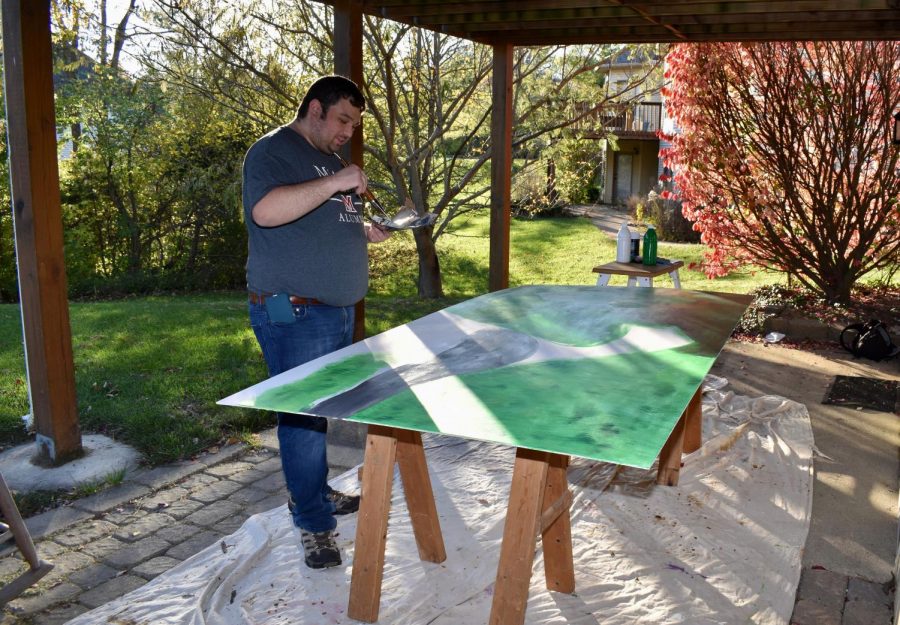 Jared Coffin paints his mural on an 8 x 4 piece of plywood at his parents’ Oxford home. It will be one of eight murals on display this winter.

To promote economic vitality during winter in Oxford, the city is putting on Oxford Night Lights, an art and light display uptown as well as a walk-through exhibit in the garden of the Oxford Community Arts Center (OCAC).

In Uptown Park, there will be a temporary mural and light display as well as lights throughout the uptown area. If you shine a blacklight over the art at night, you are able to get a whole new experience. Each artist designed their mural to have a shifting day-to-night design.

“I really think that when cities do creative programming with the arts, it leads to economic vitality,” Greene said. “When you can engage residents to come and experience art, then they are more likely to stop in a restaurant or stop and buy that sweater.”

Artists submitted proposals for murals in late October and the selected artists will be submitting their final pieces Monday, Nov. 23, and they should be up by the day after Thanksgiving. The city is hoping for eight different murals to be included. The eight selected artists each received $400 stipends from the city.

Council Member Edna Southard is a board member of the Public Arts Commission of Oxford (PACO), which judged the submissions for the mural project.

“I believe that art and economics are interconnected, in order to create an economically vibrant community we need to encourage creative people to live here and create here,” Southard said. “That draws people in. That’s good for the community.”

Miami alumnus Jared Coffin had his proposal selected for the display. He has been working on his mural in Oxford at his parent’s home. His mural creates a scene of the Oxford Area Trails System (OATS) bridge in Peffer Park that shows different animals during the day and night.

“The week before I saw the posting for artists, we had walked the new trail,” Coffin said. “I thought it would be a good Oxford thing to-do.”

He has never worked with fluorescent materials, so he spent time planning how his art would come alive with a blacklight. Coffin said bringing art to cities is essential.

“It really livens up the city and the environment,” Coffin said.

Instead of hosting a winter event as in years past, in which a crowd is urged to gather all at one time, the city thought this programming, available for viewing over several weeks, would be safer during a pandemic.

“We’ve never done something meant to be experienced over several weeks instead of an event focus,” Greene said. “It is a subtle but important shift. We want people to trickle in with small groups.”

Seth Cropenbaker, assistant to the city manager, agrees with Greene.

“We are trying to be very conscious about not creating events that would encourage high attendance at a singular time,” Cropenbaker said.

The goal is to turn Oxford into a winter destination for the colder months. These displays will be Oxford’s version of an Instagram worthy mural.

“We want to make Oxford a cultural destination,” Southard said. “We are well on the way to doing that.”

The light and mural display is planned to be up shortly after Thanksgiving. In the coming weeks, the city also plans to set up inflatable igloos to provide warm outdoor seating for those who come uptown. Other fun elements may be added as the winter weeks unfold.

“Part of the fun is you discover as you go,” Cropenbaker said. “Some things will stay, others may come and go.”

The OCAC’s display, “Enchanted Winter,” also will be launching the week of Nov. 23 on the grounds of the arts center, 10 S. College Ave. To help create this sensory scene, the art center hired a company called PolyRhythm run and operated by Alyse Capaccio and her husband.

Capaccio’s team took OCAC’s proposal and dove right in. Over the next eight weeks, the landscape will change as new elements are added.

“We are doing multiple elements and installing them in different phases,” Capaccio said. “It will evolve over time so people can come back and it will be a little different when they return.”

It will have light orbs, lit paths, and a sensory garden. Community members can walk through to smell scents of vanilla and cinnamon and hear classical music that corresponds with the lights. Two artists have volunteered to do installations. The experience will also include a scavenger hunt to collect stamps as you explore.

During the day, trees around uptown will be decorated with “sweaters.” The art center enlisted local volunteers to create outfits for the trees.

“It’s a symbol of what the community arts center is,” Capaccio said. “It’s a lot of different members in the community coming together to make something beautiful.”

Capaccio is a Miami alumna and lived in Oxford post-graduation. Though she doesn’t live here now, this project is still meaningful to her.

“It creates an atmosphere of joy,” Capaccio said.

The goal is to not only stir some economic prosperity by bringing people uptown but to allow people to experience art amid the pandemic, said Southard.

“We are working to bring art to our community and highlight the creative spirit that is already in our midst,” Southard said.