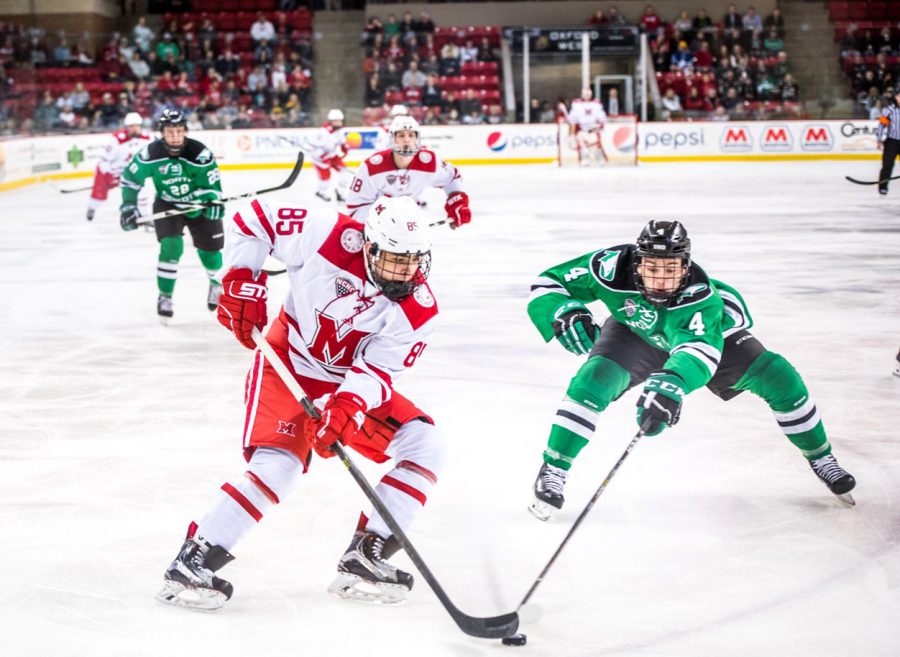 The Miami University RedHawks hockey team will begin its season on Dec. 1 in a bubble in Omaha, Neb.

In a format yet to be tested on the collegiate level, (though talks began this week to play the Men’s Basketball Tournament in a similar bubble in Indianapolis), the National Collegiate Hockey Conference (NCHC) is moving all eight of its member teams to, what it has titled, “the Pod” for the first half of the 2020-21 season.

The RedHawks will play 10 games in the Omaha bubble Dec. 1 through Dec. 20, and then play an additional 16 games after the New Year, when team travel will resume. Miami has yet to announce any non-conference matchups.

The NCHC has divided its member teams into East and West Divisions in an attempt to reduce travel for teams in the post-Pod portion of the season. The RedHawks will be in the East Division, along with Minnesota Duluth, St. Cloud State and Western Michigan.

This format follows the one used by Major League Soccer (MLS) earlier this year, where teams began their seasons in a centralized location before moving back to their home markets to play games against regional opponents. That way, teams could avoid long travel days and overnight stays on the road to reduce possible exposure to COVID-19.

“With the focus on the health and safety of student-athletes, coaches, staff and officials, the Conference has intentionally attempted to limit team travel this season,” the NCHC said in a statement outlining the season’s two-part format.

While the league has not released its official procedures for testing and quarantines inside the Pod, it has announced partnerships with the University of Nebraska Medical Center and the Global Center for Health Security in developing and implementing medical protocols for the season.

On Tuesday, Nov. 17, the Colorado College hockey team announced that they had paused all team activities following a positive test “detected during COVID-19 preseason surveillance testing of the team,” as required by the NCAA.

The NCHC responded to the first COVID-19 case among one of its teams, saying “we have been in regular communication with Colorado College to gather more details, understanding potential impacts from contact tracing, and what effects this may have on the start of the 2020-21 NCHC schedule.”

With less than 10 days until teams are set to arrive in the Pod, the NCHC has said, “any additional information, including a possible adjusted schedule, would be announced in the future.”

The close proximity and number of games inside the Pod means RedHawks Head Coach Chris Bergeron is expecting contributions from all 28 rostered players, all of whom will be making the trip to Omaha.

All games in the Pod will be played at the University of Nebraska’s Baxter Arena, but additional details about the living and practice facilities for teams have not been released.

Bergeron said his players are ready to finally start the season after experiencing multiple quarantines and training disruptions due to COVID over the past few months, including one stemming from an outbreak among Miami student-athletes in August.

“I think the first word that comes to mind is excited,” he said. “The guys are excited to get back on the ice and finally play a game.”

While life and competition in the Pod will be unfamiliar territory for all the players and staff involved, it brings a new challenge for Bergeron in only his second year at the helm of the RedHawks.

Bergeron played at Miami from 1989-93, before a seven-year stint in the pros. After hanging up his skates in 2000, Bergeron returned to Miami and spent 11 seasons as an assistant under former head coach Enrico Blasi, before taking the head coaching job at Bowling Green State University.

He returned to Oxford in the spring of 2019, leading the RedHawks to an 8-21-5 record in his first season as head coach.

“I think it’s important to be realistic in that this is only the second year of our transition,” Bergeron said.

Despite the challenges of being a young team with relatively new coaching staff, Miami will be thrust into the mix early, playing multiple games against nationally-ranked opponents in the Pod.

In the latest preseason poll, released by USCHO.com this week, four NCHC teams made the top-20, with the University of North Dakota ranked first, the University of Minnesota Duluth third, Denver fourth, and Western Michigan at spot 17.

The NCHC conference tournament is currently scheduled for March 12 through March 14, with the winners playing in the Frozen Faceoff March 19 and 20.

While no spectators will be allowed inside the Pod, all games from the Pod will be produced and broadcast through regional provider Midco Sports Network and will be available with a subscription or pass on NCHC.tv. A complete TV schedule, including games on CBS Sports Network, has not yet been released.

Miami will open its 2020 campaign on Dec. 2 against North Dakota.