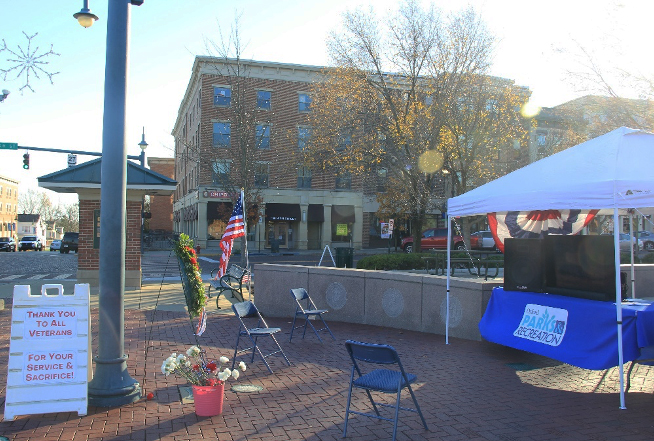 Veterans Day is usually a somber celebration, but this year, thanks to the pandemic, the celebration was both somber and quiet.

On Wednesday in Oxford, the traditional Veterans Day celebrations that gave way to a video presentation, which was conducted on Facebook to protect people from the surging coronavirus.

The video included Mayor Mike Smith remembering veterans from Oxford who served in conflicts as far back as the Revolutionary War, said Casey Wooddell the director of Oxford Parks & Recreation.

At Martin Luther King Jr. Park, there were American flags and there was silence. A row of chairs held no spectators in front of a screen where the Facebook video played.

Oxford Police Officer Richard Butler, a veteran, placed a wreath in the park to mark the day. In the video, Wooddell encouraged residents to come by the park during the day and attach a red carnation to the wreath to honor a veteran who died, or a white carnation to honor a living veteran.

“We would certainly prefer to honor our veterans in-person with a regular ceremony. However, with the restrictions in place against mass gatherings, we are unable to host that event,” Wooddell said. “This is the best option available at this time.”

According to a report by the Associated Press, American veterans are especially vulnerable to COVID-19 because they tend to be older and often have underlying health conditions. Some of the conditions can be traced to exposure to the Vietnam-era defoliant Agent Orange and smoke from burning oil fields in the Persian Gulf.

For the celebration, Miami University Glee Club and Treble Makers performed in the video to honor the veterans.

Wooddell said he thinks people’s responses to the celebration will vary greatly. People may have been pleased with this new way to honor veterans, but others may have wished for a more traditional ceremony, regardless of the pandemic.

“At the end, it might evolve into something where we offer both online and in-person, in order to serve as many people as possible,” Wooddell said. “Overall, I believe the response will be far more positive than negative.”