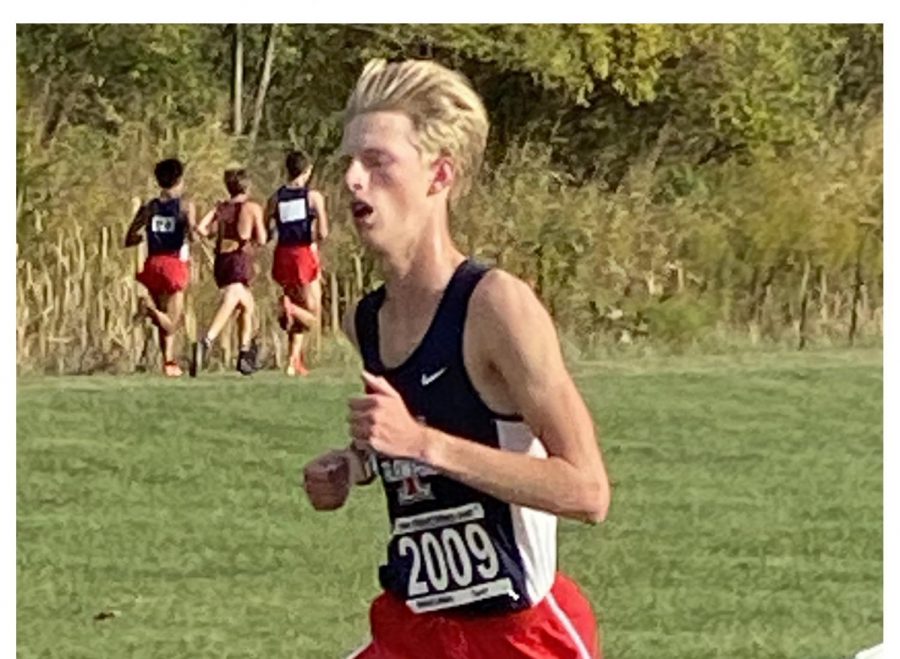 Kiefer Bell at the Southwest Ohio District Championships, in Cedarville, on Oct. 24.

Race day for cross country runner Kiefer Bell means lacing up the spikes… and only drinking from his blue unicorns and rainbows bottle.

Just a junior at Talawanda High School, Bell is no stranger to a little bit race day superstition.

“I have quite a few superstitions,” Bell said. “I have two pairs of racing socks that I alternate throughout the season. I also can only use a blue water bottle with unicorns and rainbows on it. I also wear my special bumblebee hat while I warm-up for my race.”

Bell focuses on more than just his training and superstitions to get him through races — he is also a very analytical runner, always knowing who his top competitors will be on race day. He even considers whether certain competitors are better at shorter or longer distances, helping him decide on a race strategy.

“My strategy going into a race is to find an individual or group of runners who have slightly better race times than me,” Bell said. “I usually know who these runners are and what they look like so at the start of the race I am able to find them pretty easily.”

“Kiefer is more analytical and he knows exactly where he stands. He really scouts out the competition,” Stiver said. “And so that was something that we talked about, trying to find people he’d raced against this year and kinda using them as markers, so to speak.”

Whether it’s the superstitions or analytical mindset, Bell is certainly finding success on the course.

At the Southwest District Championships, Oct. 24 in Cedarville, Ohio, Bell ran a 15:48 5K, breaking the Talawanda High School record of 15:51. That breaks down to just over a five-minute mile pace while running on grass and up and down hills.

Placing third and running a personal best, as well as setting the Talawanda record at districts, secured Bell’s spot on the line at OHSAA Regionals in Troy, Ohio the following week, Oct. 31. Placing in the top 20 in his region would punch Bell’s individual ticket to the state championship.

On race day, with racing socks and bumblebee hat on and unicorn and rainbow water bottle in hand, Bell arrived in Troy for regionals. Last year, he had placed ninth, individually qualifying. He was set to do it again.

Bell placed ninth again, and even though he said the race could have gone better, it was enough to put his name on the start list for the Nov. 7 state meet in Obetz, Ohio, just south of Columbus.

Bell is the only boy cross country runner from Talawanda to qualify. Hannah Lippincott will represent Talawanda on the girl’s side.

Going into the state meet, Bell has his sights set on a big finish to the season. Last year, as a sophomore, he placed 43rd out of 186 competitors.

“This year I would love to see myself in the top 20, there have been some very fast times this year so I will definitely have to work for a top 20 finish,” Bell said. “I would also like to get a big (personal record) this weekend.”

Though it is hard to compare times in cross country, as different courses have different terrains and surfaces, Bell’s personal best from districts this year would place him just inside that top 20 mark, according to last year’s times.

After his big race Saturday, Bell plans to celebrate with a cheeseburger or chicken tenders, and retire the unicorns and rainbows water bottle until track season.