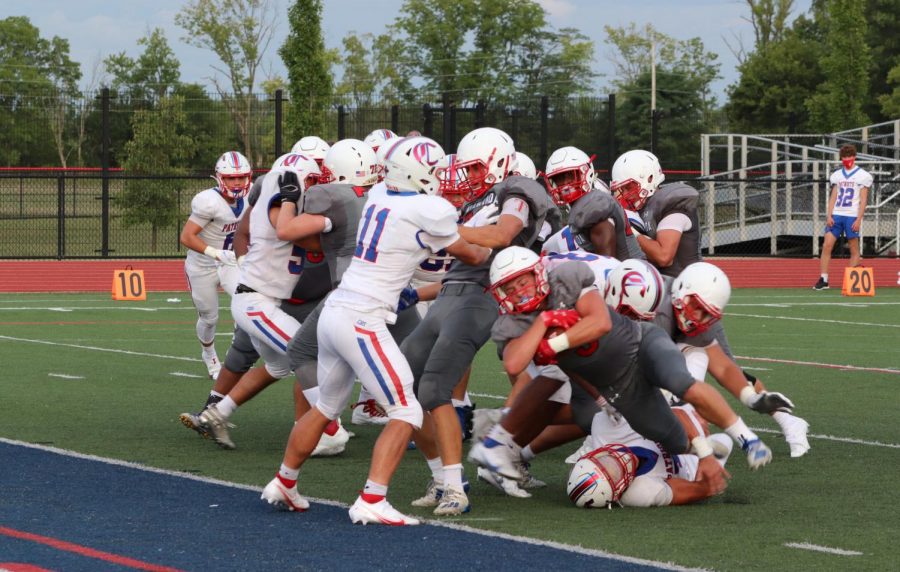 Talawanda High School work with Chatterbox Sports to livestream all of the school’s home football games this fall, as well as other sporting events, so fans not allowed into the stands because of COVID-19 restrictions could watch games such as this one against Dayton Carroll Aug. 28.

With social distancing requirements and restricted attendance at games prompted by COVID-19 concerns, this fall has been a tough season for high school sports fans. But Talawanda High School and Chatterbox Sports teamed up to provide a new way to watch games.

Chatterbox streams high school games across southwest Ohio. This year, the company partnered with Talawanda to stream every home football game, along with some boys soccer, girls soccer and volleyball games.

Media students at the school have participated in the productions.

“For Chatterbox, I announce color or play-by-play for football, soccer and basketball games for many different schools as I am assigned,” Talawanda student Luke West Poley said.

Andrew Zimmerman teaches the school’s broadcasting class and is the LiveStream coordinator for Talawanda. “Our students are very motivated to work with Chatterbox because they pay them,” Zimmerman said. “You could call these paid internships.”

Chatterbox Sports has used a few students from Talawanda as workers for games in the area. To stream games through Chatterbox, subscribers must pay $13.99 a month. Students like Poley are “contracted” and are paid $40 a game, founder and president of Chatterbox Sports Trace Fowler said.

With an average viewership of 700 to 800 households per broadcast, Chatterbox provides an outlet to reach a greater audience. Football games have seen the highest turnout.

“We reach more people in the community through Chatterbox because they actively promote,” Zimmerman said. “Lots of people have subscribed to their app, more than we could ever reach.”

With the pandemic limiting the number of people allowed to watch games in school stadiums, the demand for Chatterbox’s service increased, Fowler said.

“We felt like there should be a place in which people can turn to watch the game if they are unable to make it for various reasons,” he said. “It took a lot of the things we were trying to strive to do for a lot of athletic departments and it accelerated it very quickly to where they didn’t have a choice.”

The response from the community was positive with both Chatterbox and Talawanda high school streaming looking to expand.

“The requests to livestream sometimes outpace our ability to stream them,” Zimmerman said.

With the pandemic still going on, some students are hesitant to be in large groups of people at sporting events.

“Lots of teams have limited the number of fans allowed into their contests. And a lot of those fans are still afraid to be in large groups, and older people like grandparents of kids either can’t travel to see the games or they are being cautious during this time,” Zimmerman said.

According to OHSAA, for football games, only 15% of the stadium’s permanent seating capacity may be admitted to games.

“We cover almost every sport, the only ones we haven’t really found a way to do to the quality that we want are individual sports,” Fowler said.

Poley also plans on continuing his positions into winter sports.