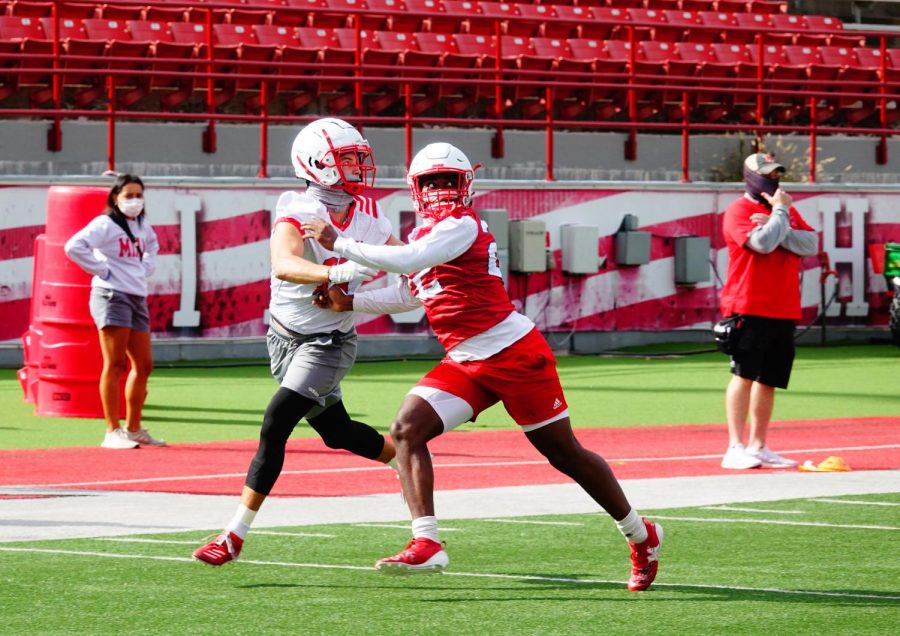 Ja’von Kimpson (red shirt) and Jack Sorenson vie for the ball while wearing masks during practice this week. The first game of the COVID-shortened season will be Nov. 4

The Miami University football team began practicing this week, after the Mid-American Conference (MAC) announced Sept. 25 that it will conduct a COVID-shortened season with games set to begin Nov. 4.

The team is working out in the Dauch Indoor Sport Center. The indoor facility has been transformed into a multipurpose area consisting of a makeshift weight room, recovery room, half of a training room, two-thirds of a locker room and a practice area.

The ventilation system at the indoor facility circulates outside air, ensuring players and staff are not breathing the same air over and over again.

“We have been really good at exceeding the bare minimum,” Martin said. “My guys are wearing masks when we play, because to me, that’s when we have close contact.”

Additionally, players are required to wear masks in the building and when lifting. Martin has been preaching caution to players since March, but with in-person classes and living in different residences, challenges arise.

Particularly at Miami University, which has had well over 1,000 positive COVID-19 cases since students returned to Oxford in August, players have been encouraged to use their best judgment.

“Try to be as judicious as possible who you hang out with,” said Martin.

The Mid-American Conference will test everyone who is part of day-to-day football operations, including players, coaches and trainers. Starting Oct. 4, tests will be conducted four times a week, with one of them occurring the day before a game.

“The more you test, the more you can control this,” said Martin. He has heard all MAC teams will be using the same company for tests, but it has yet to be announced.

If a player tests positive, the football team plans to follow the Miami University and Butler County Health guidelines. Students follow the Healthy Together Pledge which entails immediately quarantining in their off-campus housing or designated on-campus isolation space for two weeks. They must report their positive case to the school and contact tracing will be done by the Butler County General Health District.

The Miami football team had four positive cases over the summer.

As the defending MAC champions, with 10 returning offensive starters and six starters returning on defense, the players’ reactions have been positive.

“Monday’s practice was more like a grade school recess than a college football program,” said Martin. “There were a lot of smiling faces out there.”

The team has a little over a month to prepare for the upcoming season and get the players in shape. Martin’s philosophy is to “be smart and don’t rush,” so injuries do not occur.

The approach is to “make sure our kids are back in great shape lifting and running and flexibility and then we want to build their stamina up as we go,” he said.

The team began Monday with a 90-minute practice with about half of it being a walk-through, so players didn’t “attack their bodies” right away, the coach said. Practicing with pads will begin next week.

This season looks very different than past years, with Martin spending a large portion of his time ensuring the football team does everything right from a safety standpoint.

“I’ve become the COVID coach and not really the football coach,” he said.

Martin said the team is excited to be back and eager to play, but under restrictions set by the MAC, there will be no general public attendance in the stands or tailgate parties outside of the stadiums.

In addition, the conference website states, “the participation of Marching Band, Dance, Cheer and Spirit Squads at football games will be guided by Conference protocols at institutional discretion consistent with public health guidance.”