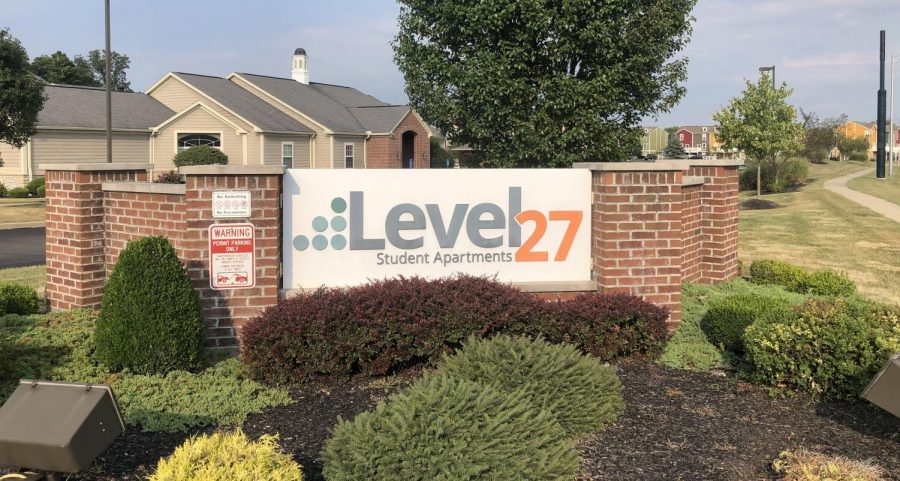 Oxford apartment complexes such as Level 27 took in a surge of new tenants when Miami decided sophomores did not have to live in the dormitories this year.

When Miami University decided in mid-summer not to require sophomores to live in the dormitories this year, it reduced the number of students living on campus by 40 percent.

Many of those sophomores, rather than staying home while all classes were being taught remotely, flooded the Oxford apartment market, choosing to live in Oxford, while taking their classes remotely.

“I was pretty excited to live off-campus because I’ve just always wanted to have my own place.” said sophomore Julia Hardy. “For me personally, I didn’t like the dorm situation. I just felt like I didn’t have a lot of freedom and I had to go to the cafeterias’ dining halls.”

Currently, the city of Oxford has a total of 4,813 approved rentals. To be an “approved” rental in the city, units must comply with a checklist that includes the number of people that can live there, criteria for room sizes, smoke detectors, fire extinguishers, window sizes and other safety features, said Lynn Taylor, administrative assistant in the city’s Community Development Department.

The unexpected growth in students seeking off-campus housing left some housing providers scrambling.  Employees at the Verge, 945 Arrowhead Drive, found themselves working overtime to prepare for the last-minute surge in tenants. The complex’s Spectrum Wi-Fi was taxed as all the new students signed into classes online.

“We had a pretty big influx of people who were looking to sign leases right then and that was pretty bad timing,” said Emily Jones, a Miami senior who works in the rental office at the Verge. “We were just getting ready to move all of our old residents out and prepare units for new residents. We were trying to focus on leasing or turning on new units during all of these things all at the same time. So, it definitely made life in the office pretty hectic,” Jones said.

After the big move-in, the Verge was around 97 to 98 percent full, said Jones. However, some students who had signed leases for the 2020-21 school year before the pandemic struck last spring, wanted to get out of their leases and live at home while taking classes remotely. Companies running apartment complexes in the city were not inclined to allow those leases to be broken.

“I definitely empathize and sympathize with everybody who is not returning to Oxford, but, currently the lease contracts are legally binding documents so we can’t just cancel the lease,” Jones said.

Management at several complexes require students to do a full title transfer to a new tenant that the student finds themselves before they will allow someone to get out of a lease agreement.

Staffers at Level 27 apartment complex at 3770 Southpointe Parkway, saw a huge surge in leasing once the sophomores were told they did not have to stay in the dorms. “We signed over 100 leases in a week,” said Michaela Baker, Level 27 leasing and marketing director.

Although many people came back to campus, some students did choose to stay at home while taking classes remotely. Hassen Hamid, a fifth-year undergraduate, decided not to return to Oxford.

“I decided to stay home in Toledo because I got a job and developed effective work habits with online learning. I wanted to return, but I figured I would be saving on rent, while also making an income to save which is a huge gain for me,” said Hamid.

It’s unclear whether Hamid and other students will have that option next semester. Starting Sept. 21, Miami University made transitions into hybrid and in-person classes for the remainder of the fall semester. University officials have not announced plans for spring semester.