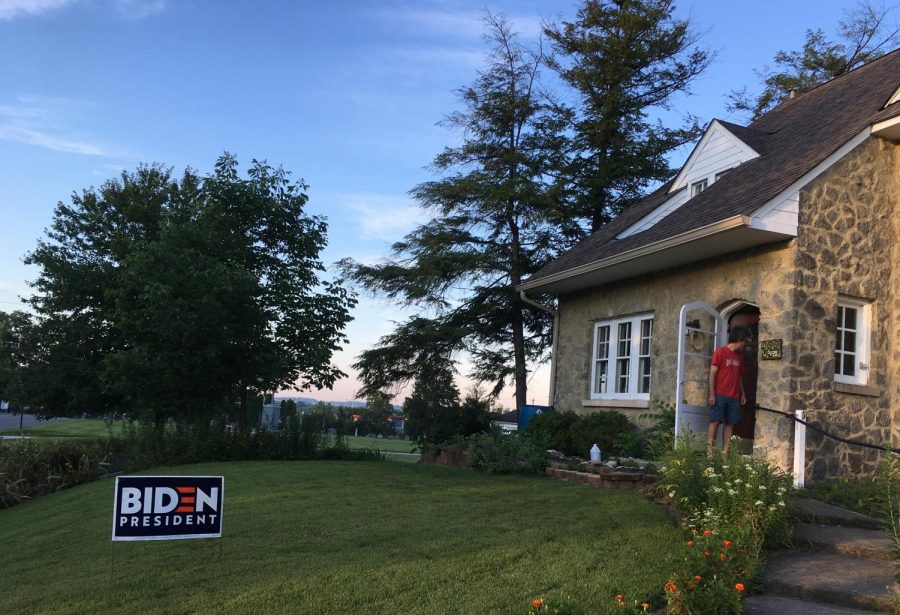 Carla Blackmar Rice says the Biden sign in front of her Oxford home has been stolen twice.

The things we can get used to… amiright??

I’d heard that other folks in Oxford had their Joe Biden signs stolen, but I figured it wouldn’t happen to me.

Plus, as a mom with a job, a kid in virtual school and a busy spouse, augering our flimsy Biden sign into our parched lawn each morning and then remembering to put it back in the house at night seemed like a bridge too far.  Maybe I’d do it for Elizabeth Warren (universal child care, end corporate welfare) but not for Joe.

So, we just stuck our sign out there in the middle of the grass and assumed everything would be fine.

And it got stolen not once, but twice.

Of course, I was too busy to notice the first time until a neighbor pointed it out.  The second time it disappeared, we got pretty mad.

I spent the day stewing on what kind of snarky replacement sign I’d put out instead, but people drive too fast on my street to read things, so we ended up getting our third Biden sign and developed a plan for how to protect it.

A friend lent us some wildlife cameras.  The spouse and I quibbled about best strategies to use them for catching the burglar.  We succeeded in identifying that rabbits went into our vegetable garden (it didn’t get a picture of the groundhog that did the real damage).  And, in the end, we realized that in order to get a good picture of the thief, the camera would need to be visible and it would probably get stolen also.

Another wise friend suggested that we just suck it up, and plan to put our Joe Biden sign out each morning and take it in again each night.  In the final analysis, this seemed easier than suspending infrared cameras from the roof, or figuring out how to lock Velcro to a brick.  I acquiesced, and became a daily sign-mover.

We’re not perfect sign custodians.  Sometimes we forget to put it out.  Once or twice we left the sign out till midnight before remembering to take it in. But most days it’s a nice ritual — jabbing it into the grass in the morning, remembering to bring it inside as the last activity of the night.  We feel like guardians of some small decency, protectors of a tiny hope that we’ll see the end of Trumpism.

And as sweet as this ritual is, it’s a symbol of how far we’ve fallen.  One night this past year, we YouTubed our way over to an interview Michelle Obama filmed just before she left the White House.  There she was, generous and funny, sparkling in her wit, optimistic that things might be OK.  The descent from a daily expectation of decency that was our norm into a daily expectation that someone is going to steal what’s left of your democracy in the night — it knocks the wind out of you.

As much as we all hashtagged #notnormal and promised not to fight back the criminal corruption of the Trump administration — revelations that would once have been shocking now fall with a dull thud.  Trump paid less income tax than you did last year?  Of course he did.

In this last stretch before Election Day, see if you can find something to remind you of what we were before and what we might still become.  Check out some Obama on YouTube, or, if it feels too weird to watch people talk to each other unmasked, why not revisit the Democratic Convention?  Re-watch that roll-call, or maybe Michelle’s speech.  And then, let’s go vote and remind ourselves that we are a nation of decent, loving people that don’t go stealing each other’s election signs in the night.

Carla Blackmar Rice is an Oxford resident and a supporter of Joe Biden.