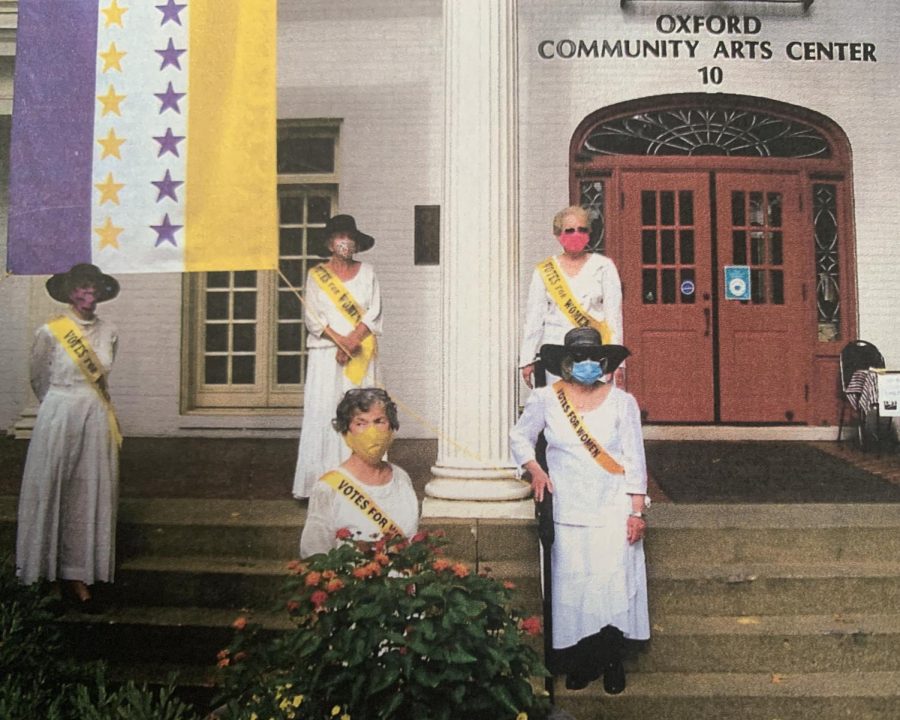 One hundred years ago the United States ratified the 19th Amendment to the U.S. Constitution, extending voting rights to women. The struggle for women’s suffrage had been going on in Oxford for a lot longer than that.

“One of the essential elements of health is freedom of thought and action, a right to individual life, opinion, ambition,” she said.

Stanton’s speech was popular at the university and suffragist clubs were formed on campus. The Miami Student had predicted earlier that year, in its Feb. 23, 1870 edition, that women would help choose the president in 1880. The editorial writers were only off by 40 years.

While the Student’s editorial strongly supported women’s suffrage, its praise sounds patronizing today with a reference to “crowing hens:”

“Already has the movement for woman suffrage developed several of the strong-minded among women and brought them before the public. In conventions, petitions to Congress, and through the newspapers, the crowing hens will have their say.”

It was not until 1920 that The League of Women Voters was founded to fight for the political involvement of women and establish voter equality. 50 years after Stanton gave her speech at the university, the 19th Amendment passed and the addition of the amendment to the Constitution read, “The right of citizens of the United States to vote shall not be denied or abridged by the United States or by any State on account of sex.”

The movement has significant ties to Oxford’s education of women and creating an environment of support with The Western College and Oxford Female Institute. The Western College, later absorbed into the university and now the university’s western campus off Patterson Avenue, emphasized creating a well-rounded student body and offering a college education similar to that given to men. Caroline Scott Harrison, an Oxford native who later married Benjamin Harrison and became first lady of the United States, graduated from the Female Institute. Her father, Scott Harrison served as that school’s first president.

Stanton’s brother-in-law, Robert L. Stanton, was president of the university and his home is now known as the Stanton-Bonham House, on Spring Street. The house was given a historical marker from the Historic and Architectural Preservation Commission of the City of Oxford from the help of the League of Women Voters in Oxford.

In 1885, Miami president Robert MacFarland lived in the home with his daughter Lizzie, who would later become one of the first female students to take classes at the university.

The Oxford Female Institute is now home to The Oxford Community Arts Center, 10 S. College Ave. The Arts Center is remembering the passage of the amendment with an exhibit sponsored by the League of Women Voters that is on display until Oct. 4. The local chapter of the league was formed in 1954 and plays an active role in the community to encourage women and men to vote.

Jo McQueen, a member of the League of Women Voters in Oxford and chair of the planning and steering committee for the exhibit, said that voter turnout is the organization’s number one goal.

“We are non-partisan. It doesn’t matter who you vote for, we just want you to vote. People have spent their whole lives working for this, some women have even died, some women have been force-fed and jailed just for the simple right to vote,” she said.

“I think that if people went to the exhibit they would feel proud,” McQueen said. “They would be proud of the Women in Oxford and this country. This is a historical moment and we will become a part of history.”

The exhibit features the Ratification Flag, designed by suffragette Alice Paul, a member of the National Woman’s Suffrage Association and founder of the National Women’s Party. The flag’s colors include purple representing justice for all, white for purity of purpose, and gold for the courage to persevere.