Budget cuts and coronavirus cause Miami to wilt this year 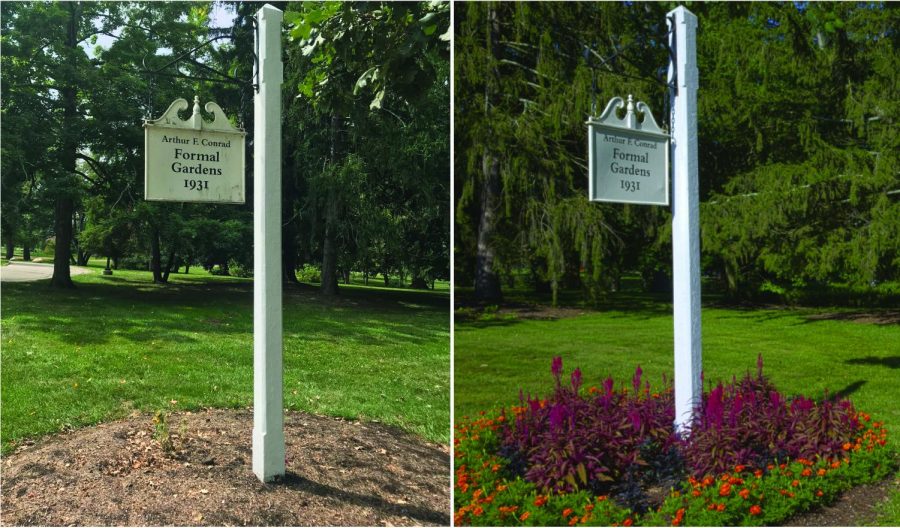 The Formal Gardens were designed by and named for Arthur Conrad. Even the sign post was supposed to rise out of the blooms.

A post on the Oxford Talk Facebook page had 206 comments on the decline of a local landmark: Miami University’s Formal Gardens. Once beautiful, it has now been reduced to weeds and dirt.

Several individuals reminisced on the weddings they had in the beautiful garden and many complained about the deterioration of the plot. The Facebook post showed pictures of the Gardens in their former glory compared to how it appears now.

I decided to take a look for myself.

After doing a little bit of investigating, I came across Miami’s official website, where they proudly boast of the Formal Gardens at 83 N. Patterson Ave., tucked between the Marcum Conference Center and The Miami Inn.

The gardens have a lot of history and were touted as a “popular spot for leisurely walks, picnics, and outdoor weddings.”

The rose garden area of the Arthur F. Conrad Formal Gardens was a centennial gift from the Beta Epsilon Chapter of Gamma Phi Beta, according to Miami’s website. In addition, Miami’s first president, Robert Hamilton Bishop, is buried in the Formal Gardens. The gardens were designed by and named for Conrad, who served as the chief landscaper and horticulturist for Miami from 1937 until 1972.

I set out to see what Miami officials had to say about the depreciation of the garden.

One commenter or the Facebook post said she heard Miami canceled its flower orders back in March when COVID-19 closed down the campus. She wondered if the university was simply going to abandon the gardens to the weeds.

“This has not been a typical year for Miami’s grounds crew due to the pandemic,” said Cody Powell, associate vice president of facilities, planning, and operations at Miami. Powell said the university had to realign its priorities due to the difficult circumstances and made the decision to not purchase any annuals for the Formal Gardens this year.

Powell claimed that although the university had to make some cutbacks this year, Miami does intend on planting annuals and maintaining the plot in the future. During a typical year, Miami’s Physical Facilities hire student employees to help with grounds upkeep including planting and watering flowers in the gardens. Unfortunately, they couldn’t do that this year.

The lot has a lot of potential and still has some beauty, but definitely needs some attention. Many commenters on the Facebook post discussed the possibility of volunteering in the gardens, from replanting to tending to the garden.

Perhaps the university should take them up on the idea.

Emily Gentry is a senior at Miami University majoring in journalism and biology. She is a reporter on the Oxford Observer staff.