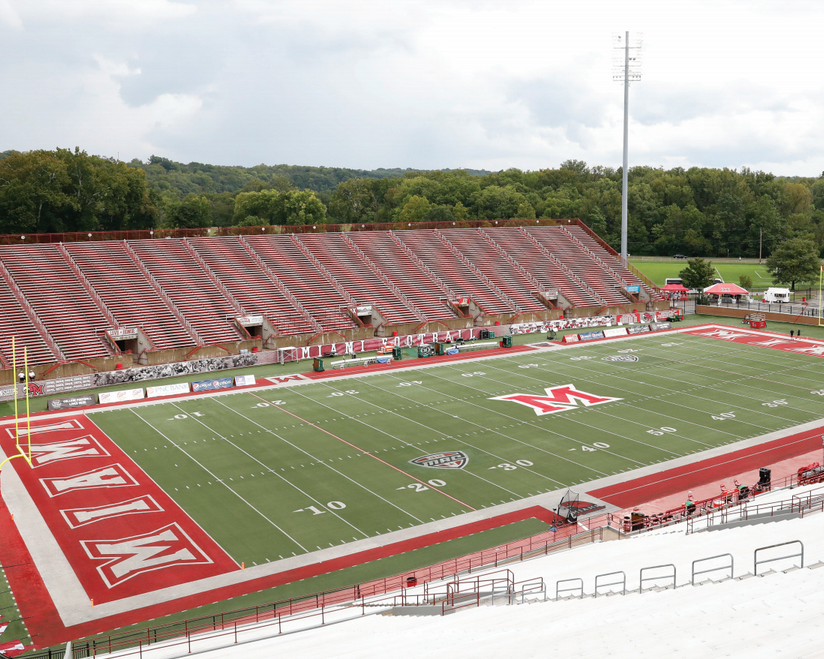 Yager Stadium remains empty because fall sports at Miami already were canceled because of COVID-19. Now all of the athletes and coaches on campus are under a 14-day quarantine

By Kelly Marsella and Emily Gentry

Twenty-seven Miami athletes tested positive for COVID-19, many of whom attended the same off-campus party after returning to Oxford, forcing the Butler County Health Department to quarantine everyone connected to the athletic program for 14 days.

The university issued a press release Aug. 24, saying the athletes were from multiple sports teams at Miami. The party in question occurred more than a week before the quarantine announcement, according to the release. The quarantine order covers all Miami athletes in Oxford, all coaches and any other personnel associated with the athletic program.

“The Butler County Health Department, out of an abundance of caution, issued a blanket quarantine order to all Miami student-athletes who have returned to Oxford to ensure none would be missed through the normal method of contact tracing,” Miami President Gregory Crawford said in a statement emailed to the entire school.

Classes began virtually at Miami Aug. 17, although many students have moved back to Oxford to live in off-campus residences.

“A college town even with no classes, is fertile ground for COVID,” said Oxford City Councilor David Prytherch, who also is a Miami University geography professor.  “The lifestyle of college students with their group-living situations, their social habits, COVID is taking advantage of that.”

It was Prytherch who introduced an ordinance passed by council Aug. 21 to impose stiff fines on those who host or attend parties of more than 10 persons not in the same household, in an effort to prevent the spread of the virus. Violators are subject to $500 fines for the first offense and $1,000 for subsequent offenses.

The university also plans to make students sign a Healthy Together Pledge, promising to follow social-distancing recommendations and wear masks in public and in all in-person classes. The university informed city council that it would take disciplinary action against students who violate it.

“There were a lot of parties the first week when students arrived and unfortunately I think we’re seeing the consequences of that,” Prytherch said.

As of Thursday, Oxford has 150 cases that tested positive for COVID-19, and another 100 tests pending, according to statistics posted by the county health department.

It was unclear, as of Thursday, whether any of the 27 athletes who tested positive for the virus received citations from the city or were being considered for discipline by the university.

“My concern for the health of all of our student-athletes is paramount,” Miami Athletic Director David Sayler said in the university’s press release. “I am disappointed that poor judgment has led to this quarantine order and put in jeopardy our efforts to have our teams study and practice together.” COVID-19 concerns had promoted the Mid-American Conference, to which Miami belongs, to cancel all fall sports competition Aug. 8.

But the number of parties being held and complaints about parties made to the police seem to be slackening off since the initial surge, Oxford Police Lt. Lara Fening said Thursday.

That could be a sign that more and more students are starting to acknowledge the danger of failing to follow public health guidelines.

“I’ve been in this town for 27 years and there are less parties right now than there have been in the past,” Fening said. “The quiet tells me they’re doing what they’re supposed to be doing.”

Spikes in COVID cases have prompted some universities around the country to cancel face-to-face classes altogether for the fall semester. Face-to-face classes still are scheduled to resume on Sept. 21, and another surge of students into town is expected on Sept. 14 when they can begin moving back into the dormitories.

“We can still contain this virus but it will take a change in our behavior and I hope people do everything they can because it’s our only hope of saving the fall semester,” said Prytherch.