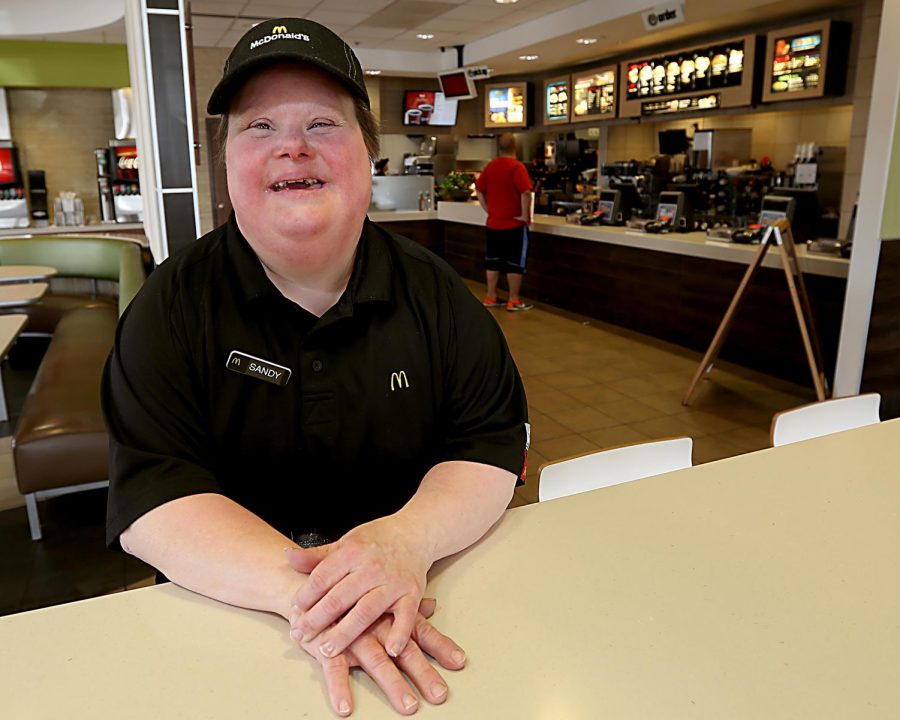 Sandy Burns was considered the “Lobby Boss” at the McDonald’s in Oxford, where she worked for 32 years.

For 32 years Sandy Burns was the “Lobby Boss” at the Oxford McDonald’s, welcoming customers and keeping the dining room tables clean.

Burns, 53, died Wednesday at her home due to dementia brought on by her Down syndrome.

Burns was born on July 26, 1967, in Oxford, Ohio. Her sister, Beverly Ezsol, said Burns was very independent from a young age. She quickly became everyone’s favorite around Oxford.

Local customers knew her at McDonald’s and would visit her during her shifts.

“All of the farmers that knew my dad, they had this ‘breakfast club’ where all of them would sit up there,” Ezsol said. “She loved to tease. They would tease her, and she’d give it right back to ‘em.”

Burns kept the cleanest lobby and always greeted customers with a smile. For every employee meal, she ate a cheeseburger— her favorite food. It was an ongoing joke that she might turn into one.

“It’s really neat because so many people that were babies while Sandy worked there, now have grown up to have their own little kids and would take them there to see Sandy,” Ezsol said.

When she got her own place with two live-in caregivers in 2003, Ezsol said it seemed like everyone in Oxford got her a housewarming gift.

“Sandy’s always been the star,” Ezsol said. “Everything about her just made people feel good.”

Brittany Kyger, Burns’ niece, was very close to her aunt and called her “a hoot.” Kyger said Burns could be found wearing anything red, laughing or singing “Jesus Loves Me.” Burns could also double Kyger’s score in bowling.

Burns was a bridesmaid in Kyger’s wedding. The entire group of bridesmaids called her “Aunt Sandy,” leading some guests to think the whole bridal party was related.

“That’s just what she was to them,” Kyger said. “She was very proud to be an aunt…She loved in a way no one else can.”

Connie Mehlman, the connection coordinator for the Butler County Board of Developmental Disabilities, worked alongside Burns in many disability programs. Burns was an ambassador for the board. She was also a part of outreach programs such as Natural Ties and Best Buddies, programs that pair up those with physical or developmental disabilities with other members of the community.

“She’s such a good example of what a full life somebody can have even though she had Down syndrome,” Mehlman said. “Sandy did not limit herself. She did not let her Down syndrome define her.”

In 2002, the Burns family celebrated the Family Lifetime Achievement Award from the Butler County Board of Developmental Disabilities. The family was recognized for starting programs in the community and advocating for disability services.

Mehlman considered Burns a close friend and a “trailblazer” in the disability community. She remembers Burns for her laugh and great attitude toward everything.

“Sandy always found the good,” Mehlman said. “I think more of us should be like that.”

In addition to her sister and niece, Burns is survived by two brothers, Mike and Bill Burns; five other nieces, two nephews, nine great-nieces, and six great-nephews.