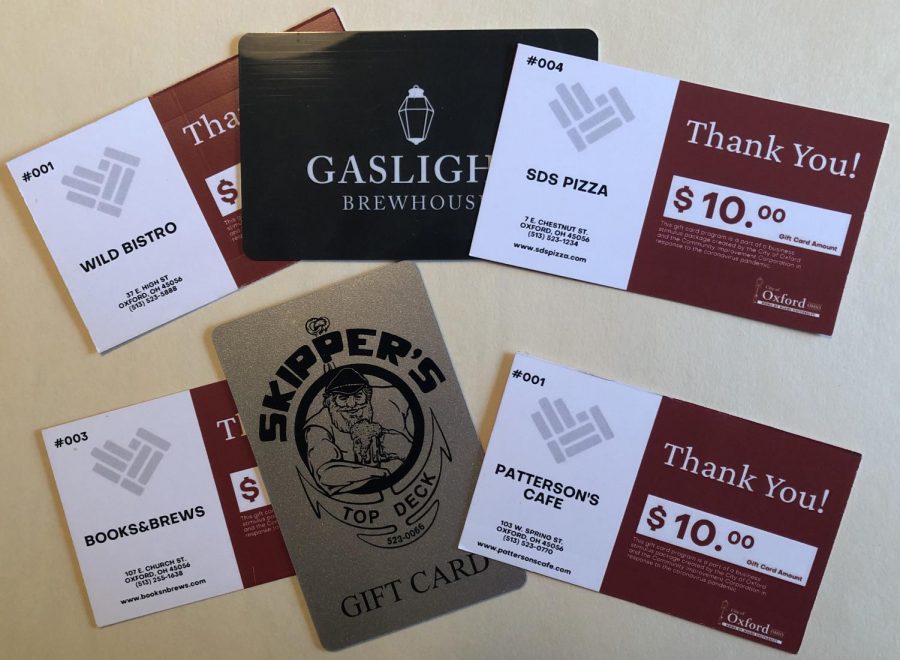 The City of Oxford sells gift cards to local businesses to stimulate spending in the community.

When the pandemic hit Oxford, it sent thousands of students to their homes around the world and local businesses feared the economic consequences. Some businesses were forced to shut down when their customer base disappeared.

That’s when the city decided it had to step in to help, instituting a $200,000 gift card program to benefit local merchants, said Jessica Greene, Oxford’s assistant city manager.

“Back in March when things were being shut down, it was really scary and all of our businesses were being forced to close their doors,” Greene said. “We started to think about what we can do to really help our local business community survive.”

Modeled after a similar idea implemented by the city of Hamilton, the program started with the city purchasing $200,000 worth of gift cards from local businesses. Now, the city is reselling the cards to people in the community and encouraging them to go shopping.

“The concept behind it is to support your local businesses to try to keep them in business,” said John Buchholz, community outreach specialist for the office of the city manager.

To get the program off the ground, the city first gave $200,000 to the Oxford Community Improvement Corporation (CIC), a non-profit group created to pursue economic development within the greater Oxford area, according to the city website. After that, the CIC created an application process for businesses.

The city held two rounds of distribution. For the first, 200 gift cards were purchased from all applicants that were brick and mortar businesses, local to Oxford and had fewer than 50 employees. Round two consisted of distributing bonuses to businesses that met additional requirements such as being shut down completely or being locally owned.

After the two rounds, the $200,000 allocated to the project had been spent.

“So now the city is laying around with $200,000 of gift cards, so now we have to resell them,” Buchholz said. “And when we resell them, that money goes back into the Community Improvement Corporation.”

By reselling the gift cards and putting the money back into the CIC for more economic development initiatives, Greene said the city is hoping for a “revolving door” effect.

Greene said the benefiting businesses have been “extremely appreciative.”

“It was a way to help,” Greene said. “That’s what we were really aiming to do, was just show our businesses that we care about them, we would help them in the way that we could. We feel that was very well received.”

Lisa Leishman, owner of You’re Fired, a do-it-yourself pottery shop and one of the businesses that received funding from both rounds of gift card purchases, said the support was heart warming during a tough time.

“What they did with the gift cards just made it feel like people are here to lend a helping hand,” Leishman said. “It was a financial perk but it was also just really an emotional perk to have as well.”

Even though the program has been up and running since early July, there are still some challenges for it to overcome. One of those, according to Buchholz, is getting people to remember to carry the gift cards with them.

“A physical gift card is not something people are used to anymore, so it is an effort to do it,” Buchholz said. “But, I think it’s the only real way to get it done.”

“I think it’s helped some businesses actually make it through so far, so I think it has helped quite a bit,” Buchholz said.

Gift cards from restaurants, retail, entertainment and more can be purchased at the City Municipal Building, 15 S. College Ave., or through the city’s webpage, which Miami University’s business fraternity, PSE, helped create. The program has more than 50 stores and restaurants to choose from. All gift cards are $10 each and expire after five years.

Once purchased, gift cards can be picked up at the City Municipal Building or can be shipped.