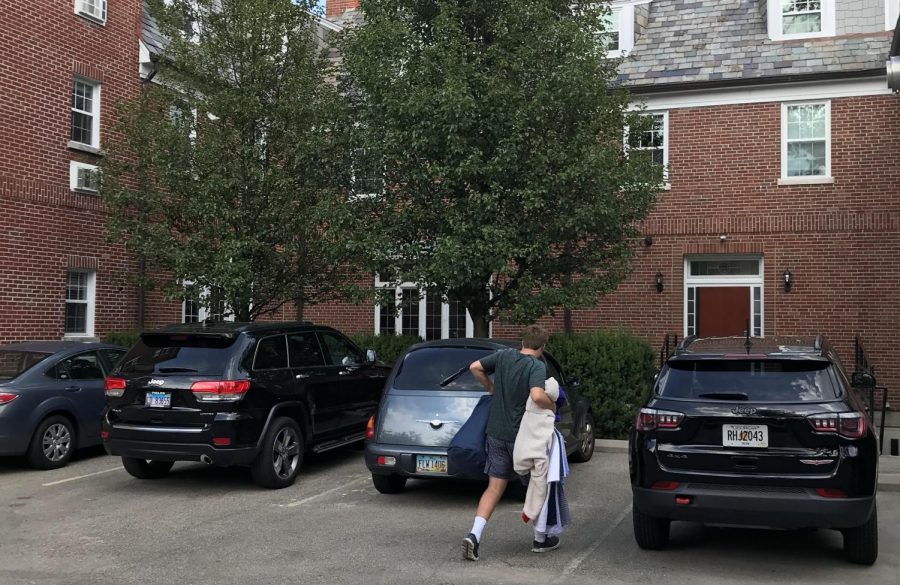 The SAE house on Talawanda Street is one of 23 fraternities on campus that are staggering move-in days to reduce crowding in an effort to cut down on the spread of COVID-19.

Even though face-to-face instruction has been suspended until mid-September, many Miami University students are already moving back into their Oxford homes away from home.

After months quarantined inside with family, it isn’t too unbelievable that many Miami students could not wait to see their friends again in Southwest Ohio, even if it means living in a much different way than any semesters in the past.

Along with no face-to-face instruction until at least Sept. 21, on-campus dormitory living has also been pushed back to September. Virtual classes are scheduled to start Monday, Aug.17. The university also decided to allow sophomores to live off-campus this year, which cuts down on crowding in the dorms, but prompted a rush of second year students into off-campus apartments and houses. Many of those students already began moving in this week.

While the influx of students back to Oxford will help the local economy, Miami University President Gregory Crawford recognizes the risks of students coming back to Oxford. “Cases are rising in many states, and with more than 40% of our Oxford students coming from outside Ohio, we’ve been monitoring the situation closely,” he said in a statement released this week.=

One area of concern is life in Miami’s off-campus fraternity houses, which can hold more than 50 students each semester. There are 23 fraternity chapters, many of which have houses off campus.

As of now, formals, socials, philanthropy activities, alumni gatherings, mom and dad weekends, and most large-scale events that involve gathering at banquet or event centers are not permitted by the Ohio Orders, but it stated as the Ohio Orders change, so will it’s guidance to students.

The Office of Fraternity and Sorority Life also stated that it expects Miami students to act responsibly and encourage behavior that will help prevent community spread of the COVID-19 virus, including wearing face coverings, socially distancing, frequent hand washing and using hand sanitizer when possible.

“Hosting an event at a private residence that brings large numbers of people together who do not live in the same residence is strongly discouraged as this type of event has been shown to be a source of rapid community spread,” the office said.

While student parties are a main concern for University officials, there’s also concern regarding houses with over 20 people living in them, which includes most of the fraternities. Ohio Gov. Mike DeWine encouraged those living in fraternity or sorority houses to have spaces to “rapidly relocate individuals,” if they become sick with the virus. Miami does not have off-campus sorority houses.

Fraternity houses have been staggering move-in times, and many houses are asking residents to wear face masks in public areas of the house and use newly installed hand sanitizing stations.

Tripp Lochmoeller, member and house manager of the Sigma Alpha Epsilon fraternity at Miami, said that the house has set up rooms for quarantining any infected individuals living in the fraternity to prevent spread among the residents. The house will also be hiring a cleaning service to disinfect all surfaces three times a week.

“We have to be really careful with how we go about our semester, we still want to have a good time but health and safety is our number one priority,” he said.