Gov. DeWine’s COVID-19 tests: What are the differences? 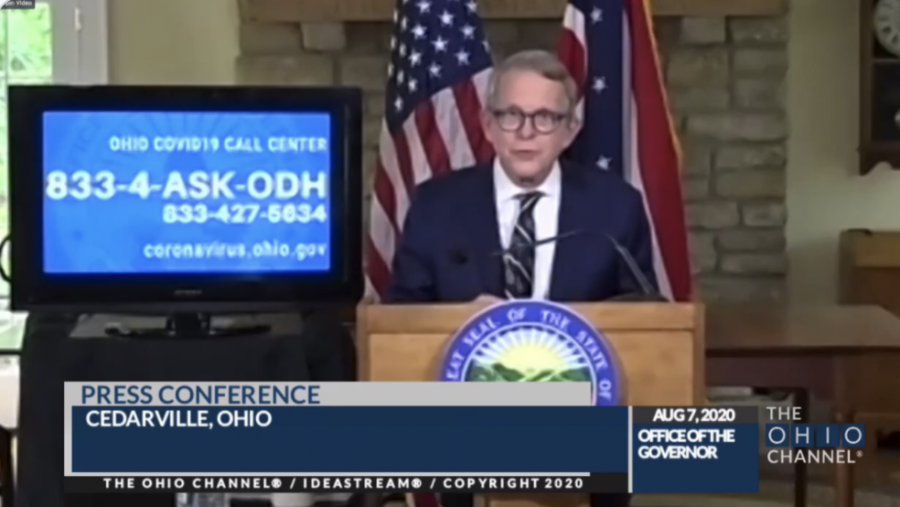 Gov. Mike DeWine speaks at a news conference Aug. 7 from his Cedarville home.

In less than 24 hours on Aug. 6, Ohio Gov. Mike DeWine had tested positive for COVID- 19 on a visit to Cleveland but then tested negative for the virus when he got back to Columbus.

DeWine took the first test because he had gone to Cleveland to greet President Trump, who was making a campaign stop. The test is standard protocol for anyone meeting with the president and the positive result meant the governor didn’t get to meet with Trump.

DeWine announced the positive result on Twitter and said that he and his wife, Fran, would be self-quarantining at home for two weeks. Later that day he announced that a second, different kind of test done at Ohio State had a negative result.

“How are we supposed to trust any of these numbers when you get a positive test and a negative one with hours of each other?” asked one man in reply to the governor’s tweet.

Ohio Press Secretary Dan Tierney said the governor’s negative test will be counted in Greene County, where his home in Cedarville is, and the positive will not count in the state’s official total since it is a false positive.

The governor and his wife tested negative again on Saturday and are no longer quarantining. The sudden shift prompted uncertainty and frustration in some cases to the public.

Further reporting revealed DeWine had undergone two versions of the COVID-19 test. The first was the recently FDA-approved antigen test, which gets results in minutes and is considerably faster than others, which can take days. FDA Public Affairs specialist Jim McKinney noted the antigen test is not as sensitive as the molecular PCR test, the second test DeWine received.

“Antigen tests are very specific for the virus, but are not as sensitive as molecular PCR tests,” wrote McKinney. “This means that positive results from antigen tests are highly accurate, but there is a higher chance of false negatives, so negative results do not rule out infection.”

During a news conference on Aug. 7, which the governor delivered in Cedarville, Chief Scientific Officer for The Ohio State University Wexner Medical Center, Dr. Peter Mohler provided additional details to help explain the differences in these tests.

PCR tests are like “big telescopes,” done far more commonly than other tests, he explained, the governor only receiving the antigen test since it was part of the White House protocol.

“Even a small bit of the virus can be amplified,” said Mohler of the PCR tests, which 1.6 million have been carried out in the state. “The advantages are we can detect very low viral loads and we have the ability to look at this over time.”

These tests make it challenging to scale the spread of coronavirus due to their slower nature and need to be operated by a trained individual, yet Mohler believes it gives the best understanding of what is going on. Antigen tests, on the other hand, are more like a pair of binoculars since they really only give a surface level understanding.

“Like binoculars, you are going to miss some stars,” he said, but adds that the expediency of the test can help contact tracers get the word out.

The jury is still out on antigen tests, despite DeWine’s false positive, and Mohler wants to conduct more research on its effectiveness.

As of Aug. 11, there are 3,001 confirmed cases of COVID-19 in Butler County, which is now at a Level 2 Public Health Emergency since last Thursday. There are three permanent testing locations in Oxford: Oxford Community Health Center, Tri-Health Priority Care of Oxford, and the McCullough-Hyde Memorial Hospital.