No college sports in sight with leagues canceling fall seasons 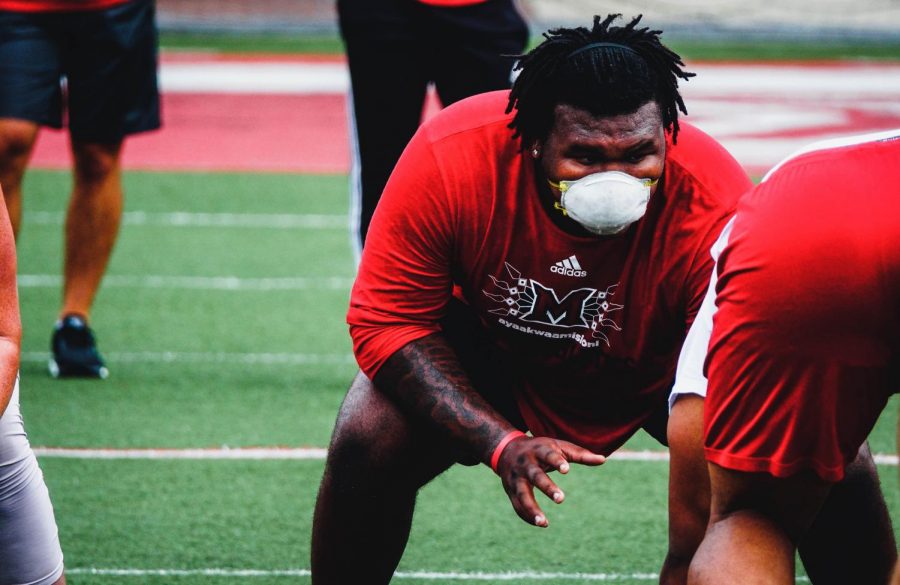 The college sports landscape was altered this week after multiple conferences announced there would be no fall season, with the hope of playing those sports, including football, in the spring. It’s complicated, evolving, and will have a ripple effect for years to come.

Here’s what you need to know.

Last Saturday, the Mid-American Conference became the first FBS conference to announce the postponement of all scheduled fall contests, due to concerns about the COVID-19 pandemic.

“The decision is grounded in the core values of the Conference that prioritize student-athlete well-being, an area the MAC has traditionally taken a leadership role,” MAC Commissioner Jon Steinbrecher said in the conference’s statement. “Clearly, we are charting a conservative path – and it is one that has been recommended by our medical advisory group.”

Aug. 6, the university presidents of each MAC school met to discuss the fate of the fall sports season. Aug. 8, the presidents voted to postpone the season to the spring. Ultimately it was the presidents’ decision, but they worked individually with their respective athletic directors to discuss options. In the following 48 hours, other conferences across the country like the Big Ten and Pac-12 announced meetings would be held to discuss plans for the fall over the next few days.

“A really tough day for our student athletes,” Miami University athletic director David Sayler said in a press conference Saturday. “They work so hard, our kids have been taking this so seriously and doing all the right things, you really hate to take this opportunity away but it’s certainly something that makes a lot of sense when you step back and think about the bigger picture.”

When it comes to why the season was ultimately postponed, Miami Football Head Coach Chuck Martin said it was a variety of factors.

“I was asked yesterday, ‘was it COVID concerns, financial concerns, testing problems, issues with travelling?’ and I’m like ‘yeah, that’s the problem, it’s all of those things,’” Martin said. “No one can tell us can you get tests back, how much do you have to test, there’s no uniform testing in college. We were a month away from supposedly playing, tell me what the protocol for college football testing to make it safe for all of our student athletes and coaches, trainers and fans is supposed to be. Is there one test a week, two tests a week, three tests a week? It’s a free-for-all.”

Tuesday, Aug. 11, the Big Ten and Pac-12 announced they would postpone the fall sports season with hopes of playing in the spring. As of Wednesday, Aug. 12, the ACC, SEC, and Big 12 are committed to beginning the fall football season Sept. 26.

When it comes to the structure of college sports, the NCAA is the governing body for all divisions and collegiate sports. However, NCAA president Mark Emmert has advised member schools and conferences to make their own decisions about whether to hold a fall season. “First and foremost, we need to make sure we provide a safe environment for college athletes to compete for an opportunity to play NCAA championships,” Emmert said in a statement released Aug. 5. “A decision based on the realities in each division will provide clarity for conferences and campuses as they determine how to safely begin the academic year and the return to sports.”

What this means for a sport like football, which brings each Power 5 school an average of $62 million per year, is that the decision is left up to each conference about whether to play or not to play, and how to go about making it safe to do so.

College football has only been canceled twice, once for the 1918 Spanish flu pandemic and again in 1943 due to World War II, with only 22 teams playing.

This decision-making setup has made the process complicated and caused frustration for many fans, administrators, players and coaches, including Miami’s Chuck Martin.

“It’s just disappointing that we’re at this point,” Martin said. “There is no college football working together, there is no us trying to be on the same page. It’s kind of every league for themselves, every man for themselves. It feels like ‘America, you better decide how you want to protect your family because no one else is going to tell you how to do it.’”

For Miami Football, the fall training schedule is still to be determined, but for now, voluntary workouts will continue in preparation for a spring season. The focus is on getting ready for the spring, said sophomore offensive guard Caleb Shaffer.

“It was a tough pill to swallow when the reality set in that we were not going to be playing especially after we were working so hard,” Shaffer said. “I believe safety comes first and we are prioritizing the health of people and I am all for that decision and thought process.”

When the MAC postponed its fall season Aug. 8, the fall season for conferences around the country came into question. In a day filled with constant rumors and speculation, coaches and players sensed their season was in jeopardy. Some of the biggest programs in college football took to social media Monday, Aug. 10 to advocate for having a season. Ohio State’s Ryan Day, Michigan’s Jim Harbaugh, and Alabama’s Nick Saban among them.

“I want to play, but I want to play for the players’ sake, the value they can create for themselves,” Saban told ESPN. “I know I’ll be criticized no matter what I say, that I don’t care about player safety. Look, players are a lot safer with us than they are running around at home. We have around a 2% positive ratio on our team since the Fourth of July. It’s a lot higher than that in society. We act like these guys can’t get this unless they play football. They can get it anywhere, whether they’re in a bar or just hanging out.”

Clemson star Quarterback Trevor Lawrence led the way for college football players Sunday, Aug. 9 by tweeting “People are at just as much, if not more risk, if we don’t play. Players will all be sent home to their own communities where social distancing is highly unlikely and medical care and expenses will be placed on the families if they were to contract COVID-19.”

The increased push for student-athlete unionizing comes as a result of the increased revenue that athletic departments collect from football. Patrick Rishe, director of the business program at Washington University in St. Louis, estimates that the “65 Power 5 schools would collectively lose more than $4 billion in football revenues” if college football was not played in the fall, according to an ESPN article.

Although many athletes are uniting saying they want to play, Power 5 conference administrators are growing increasingly concerned with the uncertainty about the long-term effects of COVID-19. According to ESPN, a rare heart condition that could be linked with coronavirus, called Myocarditis, has been fueling concern.

Myocarditis is the inflammation of the heart muscle, which is usually caused by a viral infection. When left undiagnosed and untreated, it can cause heart damage or sudden cardiac arrest.

Concerns remain about the long-term health effects of COVID-19, but coaches across the country have been insistent that decisions not be made until more information is gathered. To pressure their institutions, athletic directors and presidents to take a closer look at the situation instead of just canceling the season, coaches like Penn State’s James Franklin have called for a postponement instead of cancellation.

“While we all agree there is much uncertainty; the best decision right now isn’t to cancel the season,” Franklin tweeted Monday, Aug. 10. “I implore the Big Ten to consider all possibilities to preserve college football this fall. Our conference intentionally built a flexible schedule allowing us to easily postpone the start of the season. Let’s delay, seek clarity, build the safest environment for our guys & make the best decision!”

After the Big Ten postponed the fall sports season on Tuesday, the University of Nebraska leadership released a statement in disappointment of the decision by the Big Ten.

“Based on our conversations with our medical experts, we continue to strongly believe the absolute safest place for our student athletes is within the rigorous safety protocols, testing procedures, and the structure and support provided by Husker Athletics,” the university said on its website. “We will continue to consult with medical experts and evaluate the situation as it emerges. We hope it may be possible for our student athletes to have the opportunity to compete.”

All sorts of questions remain unanswered related to eligibility, which will hopefully be addressed when the NCAA meets to discuss eligibility rules Wednesday, Aug. 19.

With lots of uncertainties, the MAC, Big Ten, and Pac-12 remain committed to looking into what a spring schedule would look like.

“We’re just going to have a really busy spring, running a lot of different events,” Miami athletic director David Sayler said in a press conference Saturday. “They’re going to be all times of the day and days of the week. We’re getting used to that right now with the NHL and the NBA, they’re playing games at all times and all days in their bubbles and that’s kind of what we’re going to end up doing in the spring. It’ll be exciting if we get to that point.