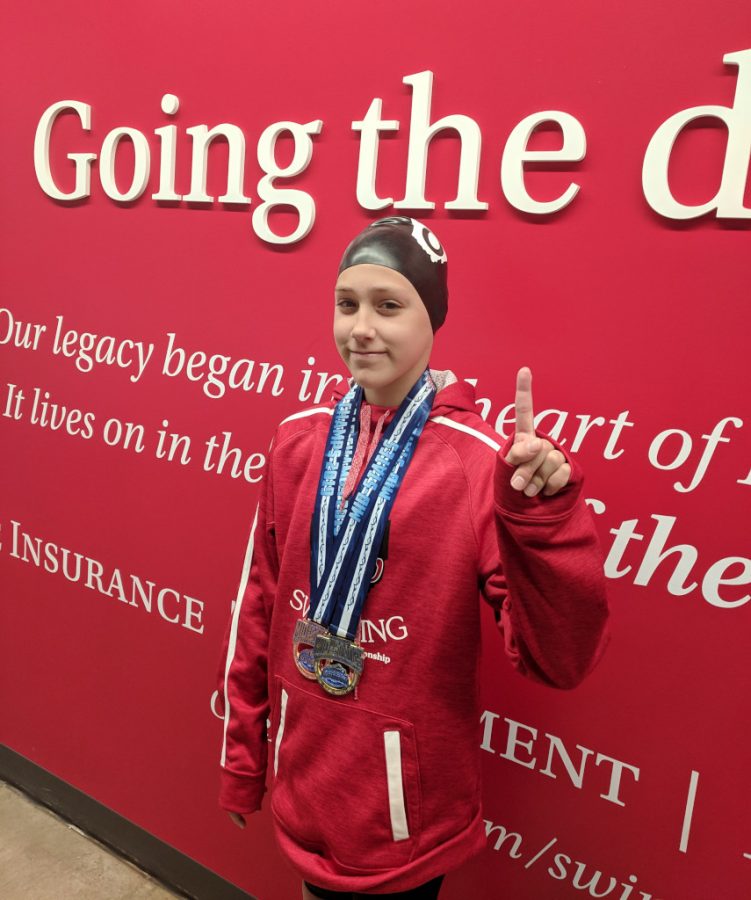 Anna Gregg on the victory stand early in January at the Mid-State All Star Swim Meet in Indianapolis. Photo courtesy of Lindsay Gregg

A Kramer Elementary fifth grader is making a splash in the national swimming world after becoming one of the fastest swimmers for several events of her age group in the state.

Anna Gregg, 10, was the only member of the Miami Makos swim club to be invited to the Mid-State All Star Swim Meet in Indianapolis on Jan. 5 and 6, where the four fastest swimmers for each event from Ohio, Indiana, Minnesota, Wisconsin, Kentucky and Michigan competed against each other. The meet was open to swimmers age 14 and under.

Anna finished in the top ten of each of the six events in which she swam, including first place in the 200 yard freestyle for girls ten and under. She is currently #1 in the state of Ohio for that event and age group, as well as for the 200 yard individual medley for girls age five to ten, according to the Ohio Swimming Rankings database.

Anna’s times also make her one of six Makos members to qualify for the Ohio Junior Olympics, which will take place at the Ohio State University in March.

Anna started swimming when she was 5, following in the footsteps of her older brother, Max. She started with the Makos on their young developmental team before working her way up to a competitive level. She’s also tried basketball, softball and soccer, but none of them stuck with her like swimming.

“I like it because not many people do it, I think, and because you meet a lot of friends when you swim and have a really good time at meets,” said Anna.

Like most swimmers, Anna spends a lot of time practicing; she’s in the pool nearly two hours a day after school, four days during the week and sometimes once on the weekend. On the weekday without swim practice she plays volleyball, which she loves and which gives her a break from the pool. During the summer she swims twice a day twice a week— in the morning and the evening— and once a day for two more days.

At practices, Anna usually swims anywhere between 2,000 or 7,000 yards. In the midst of it, she thinks mostly about nothing, except for when she thinks about how hard it is and how practice will make her better. 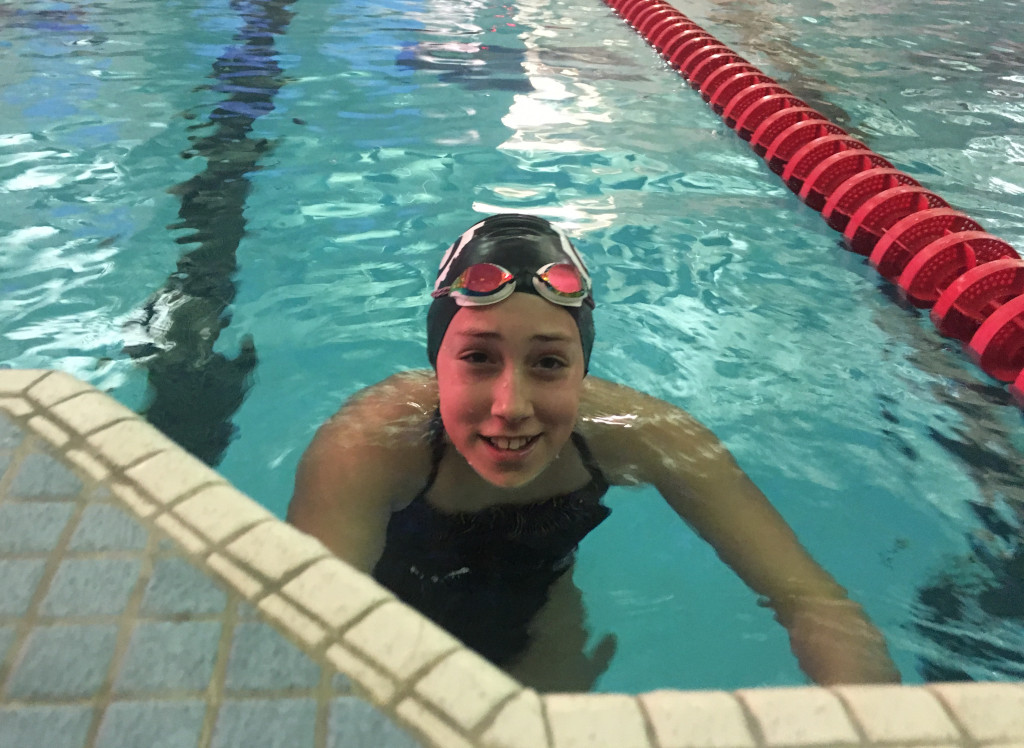 Anna Gregg takes a breather during a recent practice of the Miami Makos. Photo by Julia Arwine

Sometimes it’s difficult for Anna to dedicate so much time and effort to swimming, but she has her ways of winding down. In her free time, she likes to watch makeup tutorials and play with her dog, a labradoodle named Oliver. She also likes to sing, especially in the shower. Some of her favorite artists are Bebe Rexha, Cardi B and The Beatles. To pump herself up before a meet, she usually listens to Katy Perry’s song “Rise.”

Many of the records for her age group were set by Mercedes Patterson, now in high school. Anna has already beaten a few of Patterson’s records from when she was Anna’s age, and is set to continue that trend.

“Anna is closing in on [Mercy’s records] very rapidly,” said Makos Coach Chris McKinney. “Hopefully, if she continues to push for the rest of the season, there’s about seven more records she’s going to break.”

The swimming life requires plenty of sacrifices from the Gregg family: lots of time, year-round expenses for a sport that’s never out of season, missed vacations and more. The family is out of the house by 6:20 in the morning, and they don’t all get home until 8:15 at night due to swim practice.

Still, even when it’s hard, it comes with rewards, besides the shiny medals that Anna has won. While competing against the same girls from other teams in many different meets, Anna has made some of her best friends from swimming, both on the Makos and on competing teams.

“As a parent, it’s really cool to watch both of my kids swim because of the dedication,” said Lindsey Gregg, Anna’s mom. “It kind of transfers outside of the pool, too. They’re good kids, they make good choices, and I think swimming helps foster some of that, which is really cool.”

Anna admires Olympic swimmers like Missy Franklin, Michael Phelps and Katie Ledecky, and has dreams of her own of making it to the Olympics.

McKinney said it’s hard to tell at such a young age whether her ability will develop well enough to take her that far, but that she has drive and passion and that it’s all in her hands.

“She’s got a lot of talent,” McKinney said. “One of the things that she exceeds at, for being a ten-year-old, is she doesn’t let the big situations get to her. She just goes and swims and has fun, so she’s a lot of fun to coach… she’s just there [because] she wants to go fast.”