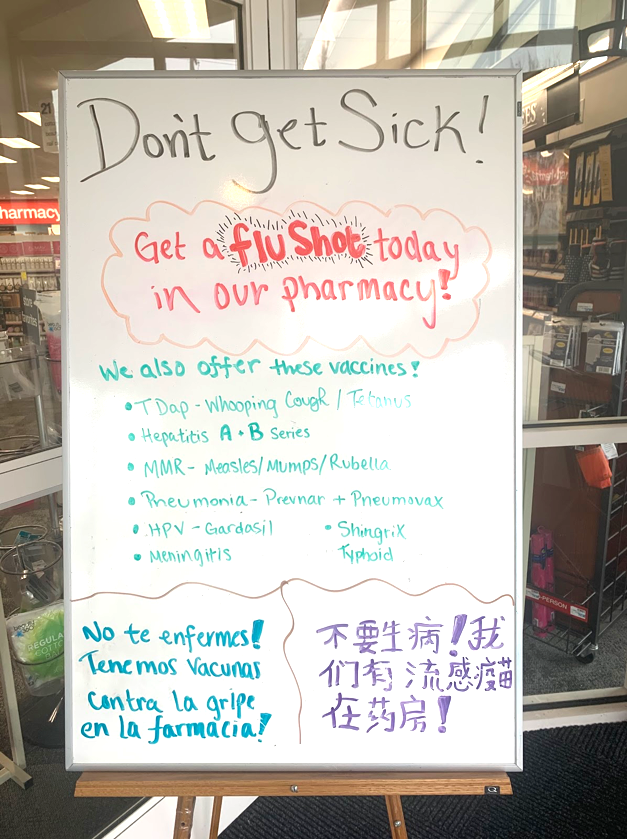 The CVS on W. Spring Street reminds customers in English, Spanish and Mandarin that it is not too late to get a flu shot. Photo by Mallory Hackett

The United States is in the middle of flu season and so far the country has seen an estimated 87,000 hospitalizations and 4,800 deaths caused by the influenza viruses, according to the Centers for Disease Control and Prevention.

The CDC collects information such as “outpatient visits of influenza-like illness (ILI), the results of laboratory testing and reports of flu hospitalizations and deaths,” to make these estimations, according to its website.

Flu season is typically at its highest between December and February but can continue until May. So far this year, the common viruses are influenza B/Victoria and A(H1N1), according to the CDC.

These strains of the flu are the two most common in Butler County as well, said County Health Commissioner Jennifer Bailer.

“We are following the national trend of the flu virus in Butler County,” she said. “However, there has been more of the B strain this season than usual. Typically at this point in the flu season, we see more A than B.”

Health departments make their estimations about the flu season based on the number of hospitalizations, Bailer said.

The CDC does not have statistics on how effective flu vaccinations were for this season yet. Data up to this point suggests a “very good match” between vaccines and the influenza A(H1N1) and B/Yamagata viruses and “some reduced similarity” with the influenza B/Victoria and A(H3N2) viruses.

In seasons past when vaccinations were well-matched with flu viruses, vaccines could be 40% to 60% effective, according to the CDC. But whether or not a particular year’s vaccine is a good match for that year’s virus, the CDC still says everyone should get vaccinated. People who are vaccinated are only about half as likely to get sick as those not vaccinated, and those with vaccinations who get sick anyway usually have less severe symptoms, according to the agency.

The flu this year has been about the same as years past for the Talawanda School District, according to district nurse Stephanie Johnson. This time of year, hygiene and preventing the spread of such viruses becomes a routine part of the education at the schools, she said.

“We have a nurse in each building, who provides education to families about preventing the flu spreading in their families or to other families,” she said. “Teaching handwashing, coughing into their sleeves, not to touch their T-zone, blowing their noses and disposing of the tissues properly then properly washing their hands; these are some of the measures the nurses teach to every student in the buildings.”

Deaths from the flu and pneumonia are down this year, according to CDC numbers. Up to now, the national mortality rate is 5.8%.

So far 170.7 million doses of the flu vaccine were given in the United States, the CDC estimates, and it’s not too late to get vaccinated. Getting the flu shot is the best way to prevent getting yourself and others sick, according to the CDC.

Along with getting vaccinated, the CDC recommends avoiding sick people, washing your hands, staying away from people if you are sick and taking the proper medications to treat the flu. If you do start to feel sick, Bailer recommends calling your health care provider as soon as possible to get Tamiflu. The antiviral medication can treat and prevent the flu, but she said the sooner you can get it, the better.