Construction to Begin on Second Phase of Oxford Area Trails 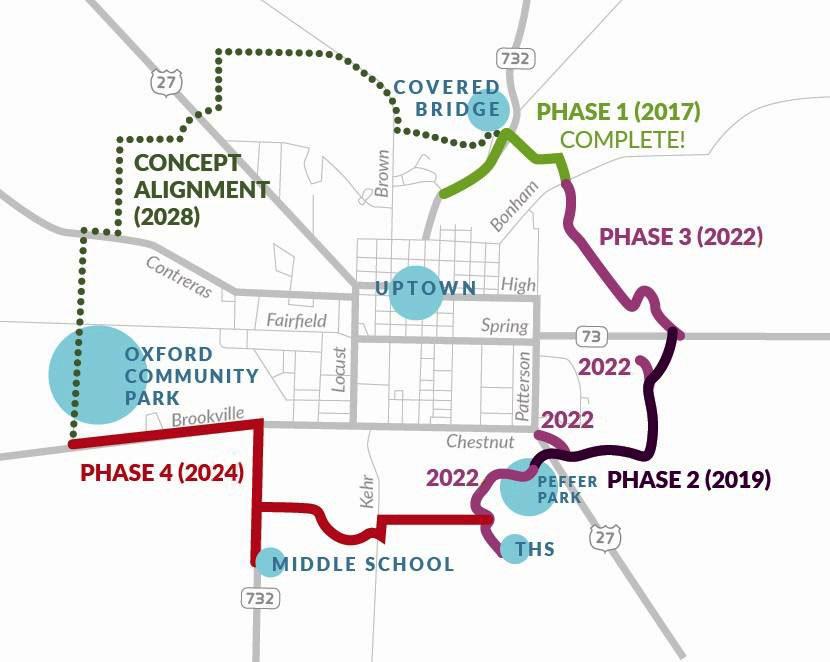 TRAILS map: the 12-mile loop of Oxford for the Oxford Area Trail System. Funding has not been approved for the concept alignment portion or the red portion between Talawanda High School and Talawanda Middle School. Map provided by Jessica Greene, executive director of Enjoy Oxford

As construction on phase 2 of the Oxford Area Trails begins this spring, City Council must finalize the exact route for the part of the 12-mile project that will loop around the northern side of the city.

With one mile of the trail completed in 2017, construction on three more sections of the multi-use trail system, scheduled for completion by 2028, should begin within the next three years.

Phase 2 of the trail will take hikers and cyclists underneath state Route 73, behind Western Campus, under U.S. Route 27 and on to Peffer Park.

The next two segments of construction, scheduled for 2022, will be built simultaneously. Phase 3 extends from Peffer Park to Talawanda High School and phase 4 will extend west from Talawanda Middle School to Oxford Community Park.

That leaves the northern loop still in need of planning.

“At this point, it’s no longer in the committee level; it’s moved down to city administration. It’s now time to get it done,” said Jessica Greene, executive director at Enjoy Oxford and a major advocate for the trail system.

While the first four phases generally take place on public land or public right-of-way, the final phase involves privately owned property. Enjoy Oxford asked the city to hire a consultant to examine the proposed route from Oxford Community Park up to the Black Covered Bridge on Corso Road, which will connect with phase 1 and finally complete the loop.

“The concept alignment part needs to be reexamined with a new eye as to what is the smartest route for this side of town,” Greene said.

Sam Perry, director of Oxford’s Community Development department, talks about how three-quarters of the northern path will cross through private property. In addition, the trail will enter private property when it goes between Talawanda High School and Talawanda Middle School, on the south side of town, so the area needs examined by the consultant.

The city will have to ask the property owners for easements—a legal right to use the land for the trail—or the city could purchase the land from the owners.

“The community does want this trail, but that doesn’t mean the private property owners that have it next to them will be in favor of it,” Perry said. “In that case sometimes it will go into mediation where there are attorneys involved trying to negotiate an agreement.”

If the city and the property owners cannot reach an agreement, the city’s next course of action would include eminent domain.

“We will try everything possible to avoid that and reach an agreement without using a mandatory purchase,” he said.

The 12-mile loop around Oxford will cost roughly $15 million to complete. In May 2018 Oxford passed a levy that provided $10 million for planning, engineering, construction and maintenance of the trails.

The city will come up with the remaining $5 million via grants and fundraising. The DuBois family donated $500,000 to the project earlier this year.

“I believe that [the trial] has potential when built to be a really strong amenity for people visiting our community and when we invite more people to visit our community they spend more money in our community, so there’s an economic development side to it as well,” Greene said.