TLC’s ‘What Not to Wear’ Host Visits Miami 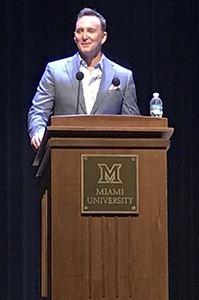 “We polish the outside to remind us that the inside is pretty special,” fashion expert Clinton Kelly said during a lecture on the importance of dressing well, presented April 8 in Hall Auditorium.

Titled, “Dressing the Body You Have, Not the Body You Want,” the lecture concluded this year’s University Lecture Series, funded by the Student Life Council, which hosts three to five lectures each year that explore various contemporary issues.

Kelly is known as the host of TLC’s “What Not to Wear” and co-host of ABC’s “The Chew.”

On “What Not to Wear,” Kelly transformed the styles of badly dressed women.

Despite his fashion-guru status, Kelly did not start his career in the fashion industry. He earned his Bachelor degree in Communications at Boston College and a Master’s in journalism from Northwestern University, and he worked as a magazine editor and freelance writer before transitioning into writing for well-known fashion magazines like Marie-Claire.

After 10 years of transforming women’s styles on “What Not to Wear,” Kelly noticed that the show was not about clothes. “It was a show about self-esteem,” he said.

During the show’s 345 episodes, he noticed three common trends among the women who appeared on the show. The “freaky dresser,” the “overly sexualized dresser,” and the “frumpy dresser”—each with her own self-esteem problems.

He described the “freaky dresser” as someone who might wear costumes or have neon hair. The “overly sexualized dresser” might wear extremely short clothing and excessive cleavage while going to the grocery store, and a “frump dresser” would drown herself in oversized, ill-fitting clothes.

The freaky and overly-sexualized dressers were often “looking for attention,” said Kelly. “They were using their clothes as a conversation starter.”

The “frumpy dresser,” however, used their clothes to hide behind to appear invisible. Many of these women told him they had insecurities about their weight.

“We are all born having healthy self-esteem,” he said, “but society celebrates thin people.”

Kelly said he has overheard many women criticizing their bodies, saying they hate certain aspects of themselves, and this self-hatred destroys self-esteem.

“You women are so rough on yourselves! You’re brutal!” he said.

Kelly acknowledged the rise of social media and its influence women’s perception of themselves when they are constantly comparing themselves online to celebrities.

He used the analogy: “The grass is always greener on the other side;” but, “it’s been fertilized with horse s—!”

“What you’re seeing is what they want you to see,” he said. “It’s not reality,” referring to the editing and effects used to change the appearance of celebrities and in advertisements.

He encouraged the audience to focus on living to their fullest potential rather than considering the opinions of others.

He thinks that “What Not to Wear” allowed participants to realize how special they are and let viewers live vicariously through them.

When a student asked how to dress for success in their job field, Kelly jokingly advised the audience to observe how everyone else dresses in the company to fit in then, “just dress slightly better,” he said.

Though he did not offer any specific style advice, Kelly encouraged the audience to use their style to show who they are as a person.

For those curious about Kelly’s fashion favorites, he loves shorts and a polo for the summertime and jeans and a cashmere sweater in the winter.

When asking Kelly questions, many of the audience members identified themselves as fashion students or fans of Kelly.

He advised the students pursuing a career in the fashion industry that they must “have a passion for fashion,” because of the intense nature of the industry. However, he encouraged everyone to pursue a career that makes them happy.

“Don’t choose a job because it has a good dental plan,” he said.

Kelly believes that life should not be burdened with low self-esteem.

“You have to be happy first and foremost,” he said. “This is supposed to be fun.”

Kelly’s own happiness comes spending time with his family, including his husband and his dog.

A lesson he wanted to share is that “family is the most important,” which he feels includes both the people you are biologically related to and “those people you chose to be family.”