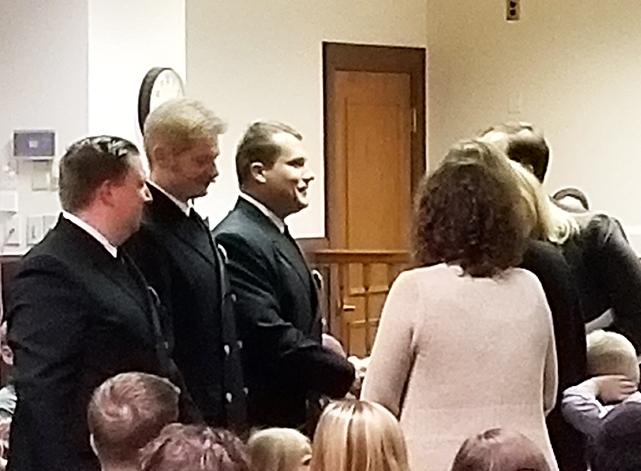 From left to right, Thom Radomski-Bomba, Jared Baker and Blake Olson are sworn in Tuesday as full-time firefighters for the City of Oxford. Photo by Brady Easterling

The three firefighters — Jared Baker, Blake Olson and Thom Radomski-Bomba – join a department that also has 30 part-time workers and 24 volunteers.

The new fire truck, a 2018 Sutphen Tanker Pumper, will operate as a fire engine and a tanker, which cuts down the need for additional personnel and trucks, Detherage said.

In 2017, the city received $200,000 toward the purchase cost from a state grant that funds public safety equipment. The remaining cost was shared among the city, Miami University and Oxford Township, all of which are served by the city’s fire department.

About the new city firefighters:

Baker grew up in Fairfield and studied botany at Miami University. He has worked fire-service jobs since 2006, and started working part time at OFD in 2011. He’s also trained as a fire inspector, fire instructor, hazmat technician, rope and swift water rescue technician and a juvenile fire-setter counselor. He coaches adults with disabilities to play competitive softball with the Butler County Therapeutic Recreations Adult Softball League.Olson grew up in Bellefontaine, Ohio, and is working on a public health degree at Miami University, and is in critical care paramedic class at Sinclair Community College. He joined OFD in 2013 as a student volunteer, and joined the Ohio National Guard in 2015, where he serves as a medic. Olson is trained as a hazard materials technician. Radomski-Bomba joined OFD in 2016 as a part-time firefighter and paramedic. He first began volunteering for fire departments in 2003. He earned a bachelor’s degree from Kent State, where he received his paramedic training through the Summa Health Systems program at Akron City Hospital in 2014. He’s a certified fire safety inspector and EMS assistant instructor, as well as a fire and explosion investigator and vehicle fire investigator. He’s designated a fire-investigation technician by the International Association of Arson Investigators.

Oxford City Council proclaimed 2018 to be the “Year of the Bird” for the National Audubon Society, which protects birds and their environments.A Fridge & Pantry Uptown Market representative, Cody Constanzo, informed council that his business is applying for a state liquor license to sell hard liquor by the glass. The business already has a license to serve beer and wine in its deli.In an interesting effort to save money, city payroll has been adjusted to round to the nearest penny instead of rounding up to the nearest penny.