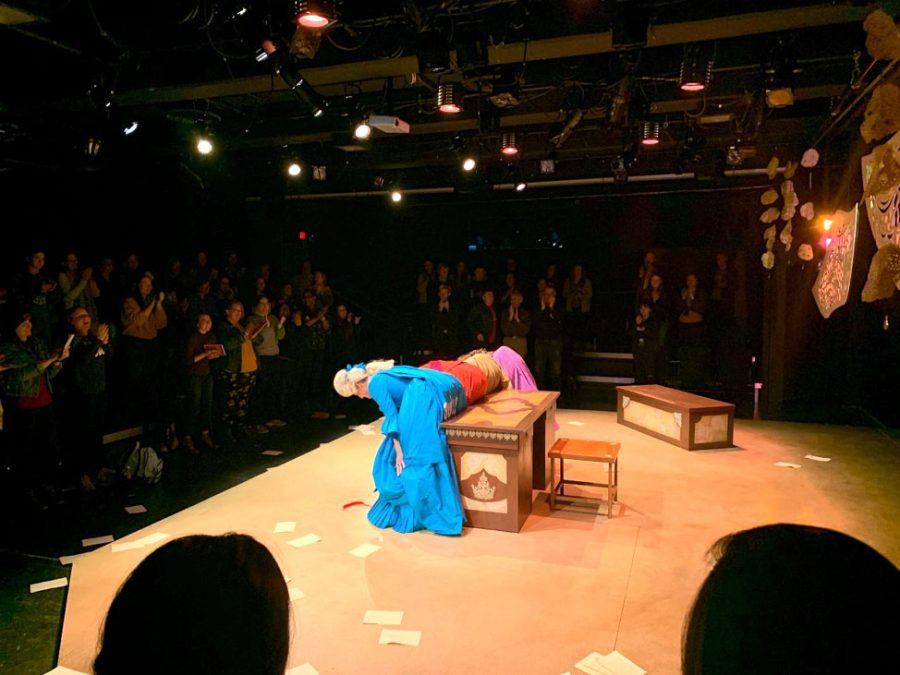 The cast of “The Revolutionists” bowed at the close of the show and received a standing ovation from the audience. Photo by Josiah Collins

“The Revolutionists,” the first spring show of the Miami Theater Department this year, debuted on Wednesday night.

Three remarkable women—Olympe De Gouges, Marie Antoinette and Charlotte Corday—came together in comedy to try to change the course of the French Revolution.

De Gouges, played by Marjorie Trimble, was a writer, but also a very active feminist who fought for women’s rights during the revolution.

Marianne Angelle, played by Vaysha Ramsey-Anderson, is a fictional character meant to represent the thousands of Haitian women who played a crucial role in gaining Haitian independence from France.

Much of the play highlights the struggles women faced during the time of the revolution, but there are also many examples of how women are still struggling with the same issues in today’s society; the play uses comedy to highlight these issues.

“The only difference between them and us is the year and continent,” playwright Lauren Gunderson said.

Director of the show, Stormi Bledsoe, offered some notes on the show that described its structure. “History is tragic and funny and messy and loud. So is this play. I hope you leave this theater ready to go make some history,” Bledsoe said.

These topics are very timely, with March being Women’s History Month, and there is a lot to take away from this show. The most potent message encourages women to be bold and make their marks on the world no matter what. The show also calls out much of modern society’s behavior and reminds us we may not have come as far as we initially thought.

Each of the women in this show must wrestle with making tough choices and determine whether or not their cause is worth their life.

To see what they decide, audiences can see the show on March 6-9 at 7:30 pm and March 10 at 2:00 pm. Tickets and showtimes are all included on the Miami box office site.