The Oxford Relay For Life Fights to Beat Cancer 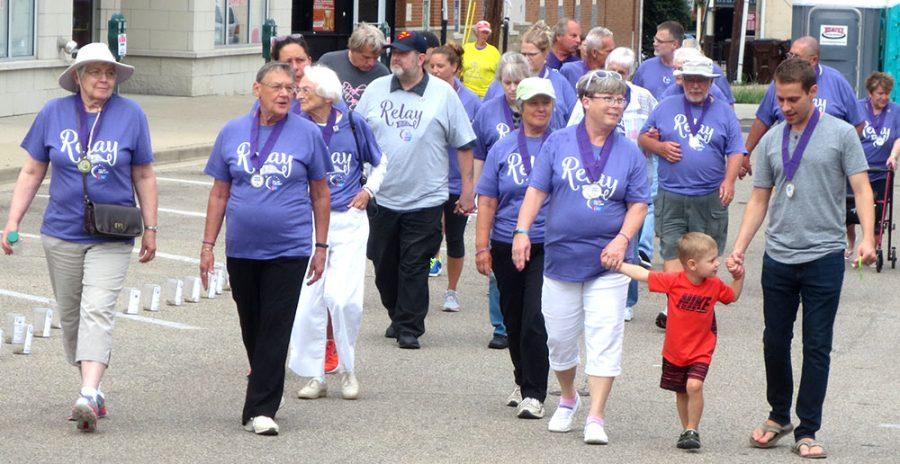 Last year’s Relay For Life drew dozens of participants to Uptown Oxford for the annual fight against cancer. Photo courtesy of Karen Martino

The event provides the community with a time to remember and honor loved ones lost to cancer, as well as a chance to support those in the community who are fighting the disease.

The Relay For Life is a signature fundraiser of the American Cancer Society (ACS), dedicated to helping communities attack cancer. Similar events are held in communities throughout the country and around the world.

It began in 1985 when Dr. Gordon Klatt walked and ran for 24 hours around a track in Washington. The following year, 19 teams doing the same thing raised more than $33,000 to fight cancer.

Today more than 4 million people in 26 countries participate. According to the ACS, in 2016 alone more than $80 million dollars was raised.

The Relay For Life is a tradition that the Oxford community has partaken in for the better part of two decades. This weekend will mark the 19th year that the Relay has taken place in the Greater Oxford Area.

“The Oxford community is the greatest community in the country and is absolutely supportive of one another,” said Karen Martino, who has been an Oxford Relay For Life participant for the past five years and is the lead organizer for this year’s event. “The turnout of the community to the Relay every year is reflective of that.”

The first local relay was held at the old Talawanda high school track roughly 19 years ago. The location has changed over the years, but in 2016 the Relay came to Oxford’s uptown park, generating even more community participation and awareness.

This year, 10 teams made up of local sponsors, church groups, and families will be raising money for those battling cancer. Each team will have a booth set up in the park with different raffles, games, and other activities, and all donations will benefit the ACS in its fight against cancer.

Local bands and musicians will perform live music at the top of every hour, starting with Todd Stidham at 12:15p.m. and ending with Jim Burns at 7:30p.m. Other notable performers are Don Pruett, Jennifer Azbil, Bauner Chafin, Big Bad John, and the Wendy and Terry Show.

The Relay will also feature a watermelon eating contest at 1:45p.m. and a wing eating contest at 4:00p.m. These food challenges are open to all attendees. The winners will earn a year’s worth of bragging rights to match their full stomachs.

At 7p.m., the Survivor Lap will begin. It’s a quarter mile walk around the park led by local cancer survivors and those currently battling. Friends, family, and community members alike are welcome to participate in a lap themselves. There are no lap fees, although donations are welcome and will go directly to the American Cancer Society.

The Luminary Ceremony will close out the Relay For Life in Oxford. At 9:30p.m. candles with the names of lost loved ones will be available for a $10 donation to the ACS. These luminaries will be lit in memory and in honor of those who fought and are fighting cancer. At 10p.m., these names will be read and a final lap around the park will be taken.

One out of every three people in the US will be diagnosed with cancer in their lifetime, according to the ACS.

As of 2018, the American Cancer Society has funded $410 million in cancer research grants. The society runs a 24/7 helpline that supports over a million cancer patients and caregivers each year and has provided hundreds of nights of free lodging to patient’s families.

“Through funds donated, time given, or awareness raised, our communities are teaming up to make a difference,” the ACS stated on their official website. “When we rally together in the fight against cancer through this fun and inspirational event, we can accomplish anything.”

The Relay For Life also gives current cancer patients and their families important resources that they need, such as free rides to treatments, hair loss and mastectomy products, online support communities, and cancer prevention and detection aids.

“Every dollar towards research takes us another step closer to wiping cancer out completely,” said Martino, a cancer survivor herself.

According to Martino, the ACS will put 80 cents of every dollar donated during the Relay toward patient services and cancer research.

She said that the support the Oxford community provides for the Relay every year has been overwhelming. “Every day we come closer to a world where no one has to hear the terrible news of a diagnosis.”

A free dinner for survivors and their caregivers will be offered Friday evening, paid for and provided by LaRosa’s Pizzeria in Oxford.

The Relay For Life in Oxford has 24 sponsors in total, many of which are local. Food trucks and other refreshment vendors will not be in attendance, instead participants are encouraged to check out local establishments for food and drink.